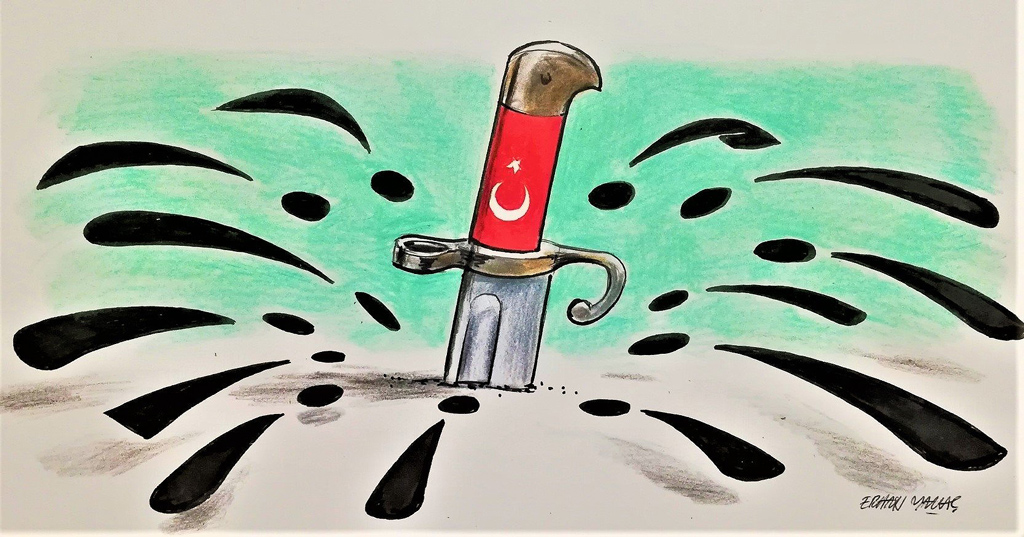 Turkey mourns the death of its 13 unarmed citizens, who were executed by the PKK terrorist organization in a cave on Mt. Gara, northern Iraq. The most recent security operation, during which three Turkish troops lost their lives, not only demonstrated anew the PKK’s bloodthirsty nature but also revealed the unbearable double standards that apply to the condemnation of terror attacks at home and abroad.

Turkey mourns the death of its 13 unarmed citizens, who were executed by the PKK terrorist organization in a cave on Mt. Gara, northern Iraq. The most recent security operation, during which three Turkish troops lost their lives, not only demonstrated anew the PKK’s bloodthirsty nature but also revealed the unbearable double standards that apply to the condemnation of terror attacks at home and abroad.

The Turkish people find it difficult to bear the thought of opposition parties condemning acts of terrorism with no reference to their perpetrator. They are also sick of the Western media referring to a designated terrorist entity as “guerillas,” “militants,” “Kurdish rebels” and “Kurdish separatists.” Last but not least, it tests our patience that a spokesperson for the U.S. State Department condemned the mass execution “if confirmed.”

That the YPG, the Syrian branch of the PKK, which Turkey has been fighting for four decades and its Western allies supposedly consider a terrorist organization, was glorified for fighting the terrorist group Daesh was already unbecoming. Dismissing an official statement by Turkey’s defense minister and offering a conditional condemnation of PKK’s latest massacre represented a new low.

The golden rule of counterterrorism is to not distinguish between terrorists. In other words, there is no difference between Daesh, the YPG and the Gülenist Terror Group (FETÖ).

President Recep Tayyip Erdoğan provided a detailed summary of the PKK’s past attacks against civilians for U.S. President Joe Biden, whom he urged to “get to know them well.”

That the Turkish leader’s first message to his American counterpart, except the obligatory letter of congratulations, was about the PKK and FETÖ was no coincidence.

The inclusion of pro-YPG figures in the Biden administration causes concern in Ankara. Turkish policymakers do not want the bilateral relationship, already strained by the S-400 issue, sanctions, the Halkbank trial and the F-35 dispute, to take a turn for the worse.

After all, an unwavering commitment to fighting the PKK and the YPG is at the top of Turkey’s national security and foreign policy agenda. I would like to underscore that the initial phone call between Erdoğan and Biden will be critically important. Diplomats on both sides must prepare adequately for that conversation.

According to media reports, Biden has a reputation for being frank with fellow world leaders. Erdoğan, too, is known for tackling problems head-on.

A shared perspective on fighting terrorist groups like Daesh and the PKK would help Turkey and the U.S. keep tensions under control across the board. The first item on the “democracy” agenda must be to combat terrorist entities killing civilians. By contrast, a “train accident” could further strain an already complicated relationship.

Turkey’s cross-border security operations, an agreement with Iraq to remove terrorists from Sinjar, and the latest developments in Gara reflect an increase in Turkish activity against the PKK and the YPG in Syria and Iraq.

Erdoğan’s remarks were particularly significant: “No country, organization, institution or individual may question, criticize or oppose Turkey’s operations in Iraq and Syria anymore. For the perpetrators of that massacre are empowered and emboldened by those who blindly support Turkey’s enemies.”

Ankara insists on cutting the supply lines between Qandil and Sinjar, and between Sinjar and the YPG-controlled parts of Syria. By establishing military bases in Iraq, the Turks strive to tear apart the terror corridor that extends into Syrian territories and to remove the terrorists from their remaining sections.

Turkey continues its fight against the PKK despite inclement weather, yet there is heightened activity among the terrorists, too. First of all, there is a notable uptick in the number of terror attacks against safe zones in northern Syria.

At the same time, the Western media spreads the claim that Daesh is regrouping and receiving logistical support from Turkey.

Hashd al-Shaabi, the Iranian-backed militia that opposes Turkish operations in Iraq, has become more active as well. The Nujaba militia already threatened Turkey, urging Ankara to “draw lessons from the fate of the occupiers.”

Finally, the Assad regime, encouraged by Russia, makes progress in negotiations with the YPG.

All of those developments may be viewed as an attempt by the relevant parties to prepare themselves for the Biden administration’s policy on Syria and the YPG.

The movement’s most recent description of cross-border security operations as “drifting away from the peaceful resolution of the Kurdish question” amounts to delusion and treason. The HDP must, willingly or involuntarily, liberate itself from the yoke of the PKK.

Return to sender: US letter about Turkey backfires
Previous

US' 'ifs and buts' on PKK cause skepticism in Turkey
Next
Loading...
Loading...
We use cookies to ensure that we give you the best experience on our website. If you continue to use this site we will assume that you are happy with it.Ok