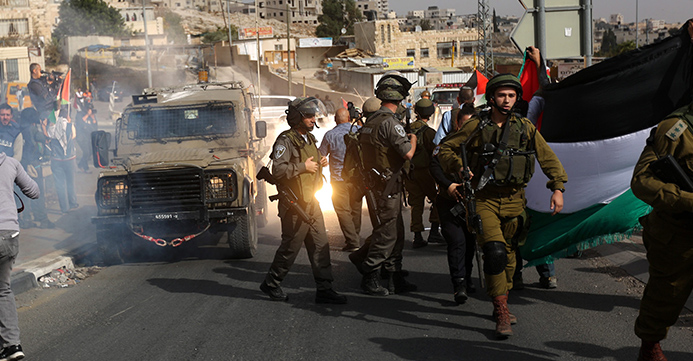 Israel has emerged unchallenged despite the level of its impunity this year. This evasion speaks to the international pattern where state officials' voice outrage against its impunity but do not follow up with concrete sanctions.

Tensions had been mounting in East Jerusalem between Palestinian residents, Israeli settlers and Israeli security forces long before October. Since January 2014, the Israeli Ministry of Housing and Construction has demolished over 300 houses and recently confiscated over 29 apartments that have been handed down to ultra-conservative Israeli settlers after violently forcing Palestinian families out of their homes in neighborhoods such as Silwan.

At the al-Haram al-Sharif (Noble Sanctuary), also known as the Temple Mount, specifically, Israeli forces raided Al-Aqsa Mosque almost every month since the beginning of the year, blocked worshippers from visiting both the Dome of the Rock and Al-Aqsa Mosque on several occasions including during the holy month of Ramadan. This was done either as a collective punishment or to close off the premise so that ultra-conservative settler groups or members of the Knesset could tour the 35-acre compound. In addition, without international scrutiny, Israel engaged in numerous excavations, digging 20 tunnels around the mosque.

However, the tension climaxed with the announcement of Israel’s plan to expand two existing illegal settlements – Har Homa and Ramat Shlomo. Tel Aviv disclosed it will add more than 1,000 housing units for the twin settlements situated in and around East Jerusalem – the part of the city Palestinians demand for their future state. The news sparked international ire, as it followed a previous announcement made in early October of plans to build another 2,610 settler homes at Givat Hamatos, one of the last open hilltops separating Jerusalem from Bethlehem. On Oct. 29, the U.N. Security Council called anemergency session at the request of Palestinian and Jordanian diplomats to tackle the unfortunate news of Israeli intransigent continuation of illegal settlement construction in the occupied Palestinian territories. On Friday, Oct. 30, for the first time since 1967, Al-Aqsa Mosque was closed off to all Palestinians as Israel deployed some 13,000 police across East Jerusalem and vandalized the premises, reminiscent of the attack on the Romanian Orthodox Church this past summer.

Indeed, the “Judaization” of East Jerusalem has long been a strategy for Israeli annexation of Jerusalem by stamping out the identity of Palestinians from the city. Judaization entails the demographic and physical altering of Jerusalem by the Israeli state to transform the space into a quintessential Jewish-Israeli state in character, consolidated by the Israeli government and control. Under international law East Jerusalem is considered occupied territory and is regarded as such by the international community, including the U.N. In other words, building Israeli infrastructure in East Jerusalem or in the West Bank violates Article 49 of the Fourth Geneva Convention, which stipulates, “The Occupying Power shall not deport or transfer parts of its own civilian population into the territory it occupies.”&nbs