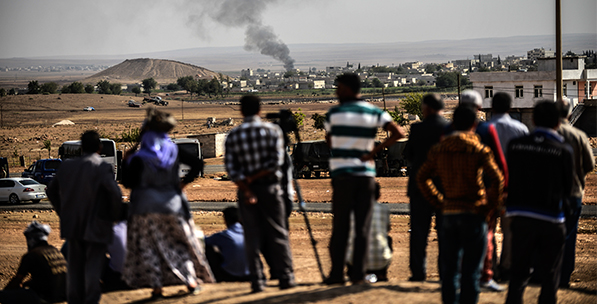 The Battlefront of the ISIS-PYD Encounter Ayn Al-Arab (Kobani)

When has the PKK and the PYDs relation with the Asad Regime started and how has it evolved? Why has ISIS begun to target the PYD? What are the possible implications of the fall of Ayn Al Arab?

Heavy clashes between the Islamic State of Iraq and Al Sham (ISIS or IS – Devlet’ul Islamiyye fil’l Irak ve’ş Şam) and the military wing of the Democratic Union Party (PYD, or in Kurdish, Partiya Yekîtiya Demokrat) the YPG (People’s Defense Units, or in Kurdish, Yekîneyên Parastina Gel) and the power struggle in the region have taken a critical turn. Following the US-led airborne attacks against ISIS in Iraq, the operation has been expanded inside Syria; and this has carried the conflict into a different dimension, therefore making an analysis necessary in the light of the latest developments. This study aims to describe the series of events immediately after the revolt against the Asad regime in the Kurdish regions in the north of Syria, and the PYD’s emergence and development, its relations with the Asad regime and controversy with the opposition groups will also be discussedAlliance between the PYD and ISIS, and the conflict in the environment afterwards, also the power struggle over Kobani will be examined in this paper.

Searching for a New Social Contract in Turkey, Tunisia and Morocco
Previous