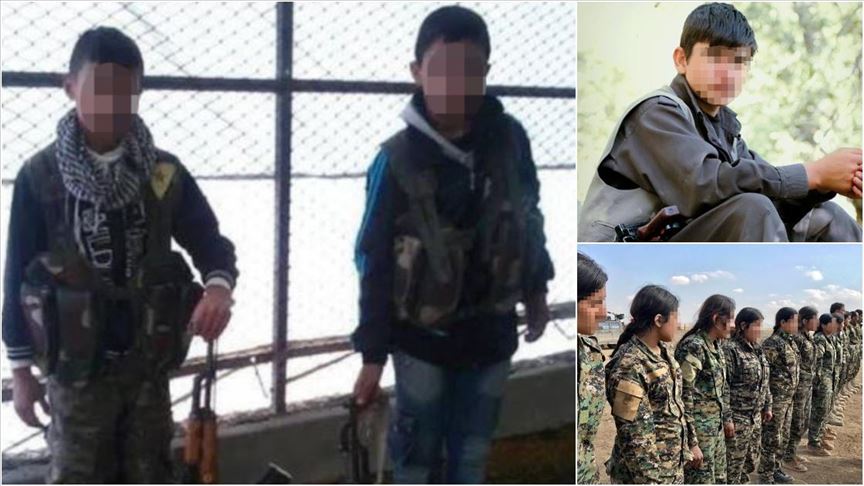 By signing pact with UN, PKK/YPG admits to long-documented war crime of recruiting and using child soldiers as young as 11

Opposition must help HDP distance itself from PKK terror

Turkey’s Interior Ministry replaced the mayors of Diyarbakır, Van and Mardin with independent trustees Monday, citing ongoing investigations into the links of those individuals on charges of “forming and managing an armed terrorist organization” and “engaging in terror propaganda.” The accusations against the ousted mayors, who were removed from office as an “interim measure,” indicate that they failed to distance themselves from the PKK terrorist organization. According to the Interior Ministry, they attempted to transform their municipalities’ administrative structures by appointing co-mayors and rehired individuals who were barred over their links to and contacts with terrorists. Moreover, municipal council members who were elected on the Peoples’ Democratic Party (HDP) ticket but could not take office due to their previous dismissal from public service reportedly served in those municipalities as if they had an official mandate.

The removal of mayors from office over their links to the PKK is not unprecedented. Ahead of the March 2019 municipal elections, independent trustees had replaced elected officials in 93 municipalities.

Dating back to 2016, this practice aims to prevent local governments from supplying recruits or offering financial and logistical support to the PKK terrorist organization. In other words, what happened Monday was part of a broader effort to liberate local communities from the yoke of terrorism – a measure that a democratic state has taken to ensure the safety of its citizens.

As expected, the opposition was quick to label the three mayors’ dismissal as a “political coup against elected officials” and an “anti-democratic, fascistic practice.” Critics noted that the mayors were dismissed just four months after municipal elections and alleged that the authorities could “do the same” in Ankara, Istanbul and Izmir. It seems that the Turkish government took action immediately upon identifying links between PKK terrorists and the municipalities in question. Monday’s dismissals also conveyed a powerful message to other HDP-controlled municipalities. Metropolitan mayors affiliated with the Republican People’s Party (CHP) also have a responsibility to prevent the use of public funds to assist the terrorist organization PKK – even though they won with the HDP’s backing.

As for the debate on “elected officials” and “democracy,” it is crucial to approach the situation from the right angle. Political representation is obviously part and parcel of democracy. Yet politicians cannot be allowed to hinder the fight against ethnic terrorism.

Unfortunately, the HDP, which claims to represent Kurdish voters, has a very poor track record on distancing itself from terrorists. The response of HDP politicians to the PKK’s return to violence in 2015, among other things, was well beyond what a democratic state could tolerate.

HDP leaders glorified violence and attempted to legitimize it. In response, some HDP deputies were stripped of their immunity and some mayors were replaced with trustees. Monday’s decision thus reaffirmed the Turkish state’s commitment to its counterterrorism agenda.

Criticizing Turkey’s democracy by saying it resorts to anti-democratic measures in its fight against ethnic terrorism is in vogue. There will be no shortage of such “democratic” critiques in the Western media and opposition circles in the coming days. They will stop at nothing to smear the Turkish state.

Yet applying such clichés to the case of HDP does not help our democracy. If anything, to normalize the HDP and other players, treading the line between nationalism and terrorism, would effectively block their integration.

A quick look at Spain and other countries combating ethnic terrorism would reveal that Turkey, contrary to conventional wisdom, welcomes representations of ethnic diversity – even though the HDP constantly crosses the limits of democracy and PKK militants in Syria and Iraq continue to threaten Turkey with outside support.

The CHP and the Good Party (İP) have a responsibility to help the HDP distance itself from terrorism – as opposed to blaming the government and encouraging the HDP to stick to its guns.