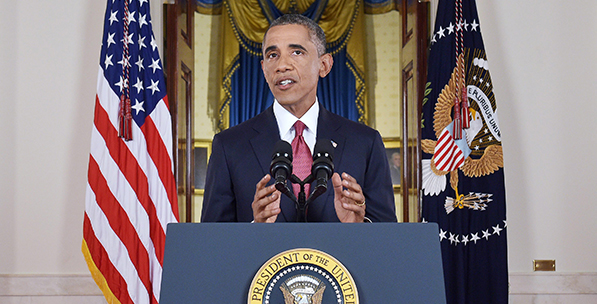 First of all, it is not clear how ISIS will be destroyed and what the projected timeframe for this operation will be.

The statement that the world was waiting from U.S. President Barack Obama in regards to his strategy to deal with the Islamic State of Iraq and al-Sham (ISIS) threat was finally made last Wednesday night. Obama addressed not only the American public but also the whole world, saying “he has a strategy” to fight ISIS. His strategy has four dimensions including the continuation of systemic air strikes on ISIS targets in Iraq and beginning new strikes on ISIS sanctuaries in Syria, increasing the number of U.S. forces advising and training the Iraqi military, strengthening counterterrorism capabilities of the U.S. and its allies by trying to acquire better intelligence about the foreign fighters and funding of ISIS and finally, sustained humanitarian aid for Sunnis and Shiites as well as religious minorities in the regions under ISIS control. Obama announced that he will try to form a broad international coalition and work together with allies during this operation. He also tried to respond to some conflicting messages in terms of the final goal of the strategy by saying that the initial goal will be to degrade the capabilities of ISIS to eventually cause its total destruction. In addition, as he did in numerous instances, he again underlined the fact that he will not authorize any combat troops during the operations in order to differentiate the operation against ISIS from the war in Iraq.

In terms of these main points, the strategy that Obama announced has some continuity with his earlier positions regarding his unwillingness to engage in military operations with “boots on the ground,” but it has also some breaks from his earlier positions, such as his passion for pulling out from the Middle East. Obama’s statement and the forward deployed diplomacy that his administration officials launched in recent weeks demonstrate a critical turning point in their approach to the ISIS threat.

However these changes that emerged in the last couple of weeks raises some questions in terms of his plan. First of all, it is not clear how ISIS will be destroyed and what the projected timeframe for this operation will be. The main question that emerges from this “global war on ISIS” is how to destroy a terrorist group/insurgent army that mutated from another terrorist organization – al-Qaida – that another president promised to destroy 13 years ago, but since then has only expanded its operations despite losing its main sanctuary and leader. ISIS, only recently was considered an offshoot of this organization, and everybody still remembers Obama calling them a junior varsity team. At this point, it is not very clear if the administration is ready for the possible mutations of ISIS into a conventional terrorist organizations or a total insurgent army after the operations or something totally different in the coming months or years. Organizations like ISIS can make tactical maneuvers to orient and reorient themselves to changing circumstances, and after the first step of the operations we could see the changes in the organization as well as some friction. Is the Obama strategy flexible enough to deal with these possible changes and challenges along the road?

A second question is in terms of the coalition that the U.S. is trying to build. In the case of a potential change in ISIS’s strategy, can the U.S. devise a strategy that will keep both its international allies and local partners in the coalition? In addition, we know that public opinion in the U.S. is a major determinant of U.S. policy in the region in general, and against ISIS in particular. In the case of a rapid change in public opinion, can the U.S. administration continue to lead the coalition that it is building? And since President Obama referred to U.S. operations in Somalia, can he continue his strategy against ISIS in the case of a “Black Hawk Down” type incident that may result an overwhelming American public demand to stop the operations in an election year? Obama disappointed and angered many U.S. allies after the chemical attacks on Syrian civilians, whi