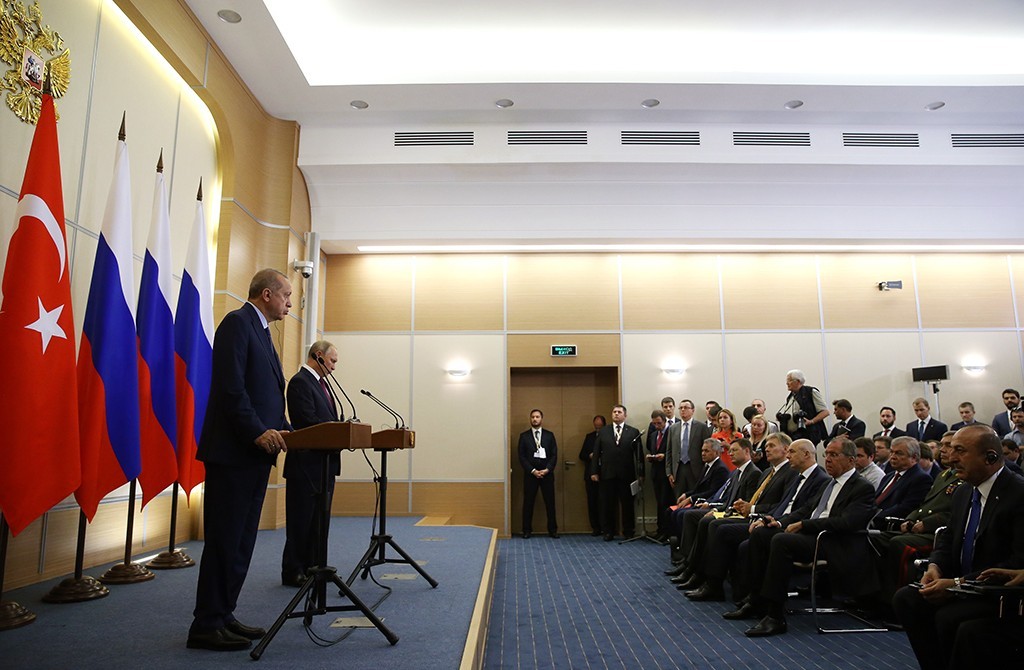 If Russia and Turkey can make the Idlib deal work, their cooperation in Syria will mean the two countries have crossed a strategic threshold

The Idlib agreement, which was the brainchild of President Recep Tayyip Erdoğan and Russian President Vladimir Putin, has been welcomed by governments around the world. Prior to the agreement, nobody expected the Russian-backed regime forces to abort the imminent offensive against Idlib. The deal prevented a humanitarian tragedy and possibly the next wave of immigration. Hence a major diplomatic victory for Turkey.

The excitement wore off quickly, however, and gave way to questions about whose interests were served best and how long the cease-fire could hold. Some observers warn that Hayat Tahrir al-Sham (HTS) and other radical groups, which the deal seeks to disarm by Oct. 15, could resist disarmament efforts. As a matter of fact, spokespeople for the HTS already identified anyone intending to lay down their arms as “traitors” to Islam. Still, people continue to wonder why Putin accepted Erdoğan’s proposal in the first place. A quick answer is that the Russian president wants to strengthen Turkey’s ties to Moscow and undermine NATO.

Without a doubt, the Idlib agreement’s primary beneficiaries were Turkey and Russia. The Turkish side ensured that the moderate opposition could remain in the only remaining de-escalation zone established as a result of the Astana process. In addition to stemming the imminent influx of refugees, Ankara denied Damascus and Tehran an opportunity to eliminate all of their rivals in Syria. The Russians, in turn, further strengthened their cooperation with Turkey and found a way to alleviate mounting international pressure and, more important, to prevent a fait accompli by the United States citing the use of chemical weapons in Idlib.

Finally, Moscow was able to secure Turkish military and diplomatic support for the removal of radical groups – the primary target of the would-be offensive – from the area. The deal makes it possible for Russia to keep Turkey, the only country with clout over the opposition, in the game and counterbalance the Iranians in Syria. In this regard, it was noteworthy that Iran and the Assad regime did not have a seat at the negotiating table. As the big boss, Moscow did what was necessary for the agreement by shutting out Tehran and Damascus.

It is no secret that Russia, the most powerful military force in Syria, has been looking for a way to keep Iran and Israel in check simultaneously. The most recent incident involving a Russian warplane proved just how risky that strategy was. Going forward, Moscow could find it increasingly difficult to keep things under control – which makes its cooperation with Turkey absolutely vital. One could argue that the Idlib agreement weakened Tehran’s and in talks with the Turks. Despite Washington’s efforts to contain the Iranians, Tehran has made no effort to work more closely with Ankara.

Instead, Iran resorts to cheap ploys such as broadcasting closed meetings without advance notice. Ironically, that trick ended up playing into the hands of the Turkish president, whose genuine and uncompromising commitment to saving Idlib was thus witnessed by the entire world. The Iranians want to make a blanket deal with Turkey covering a range of regional issues, including the situation in Syria and Iraq, the fight against PKK terrorists and the U.S. embargo. In this regard, the Idlib agreement hurt Iranian interest vis-à-vis the moderate opposition in Syria.

Notwithstanding the challenges of implementing its terms, the Idlib agreement is significant for the future. If Russia and Turkey can make the deal work, their cooperation in Syria will have crossed a strategic threshold. Ensuring that the Turkish-backed opposition remains legitimate stakeholders in the Syrian civil war could take the conflict to the next level.

In addition to managing their differences of opinion, Moscow and Ankara could cooperate on the PKK terrorist organization’s Syrian branch, the People’s Protection Units (YPG), in northern Syria and the containment of Shiite militias. Having tolerated the YPG’s presence in Tal Rifaat, the Russians could possibly wake up to the group’s collaboration with the United States and engage in a new round of talks with Turkey.

There is no reason to believe that Erdoğan and Putin reached an agreement on Idlib without talking about the post-Idlib balance of power in Syria first. Either way, the two leaders are about to cross a new strategic threshold in Idlib.

Time to reform the UN system
Next
Loading...
Loading...
We use cookies to ensure that we give you the best experience on our website. If you continue to use this site we will assume that you are happy with it.Ok