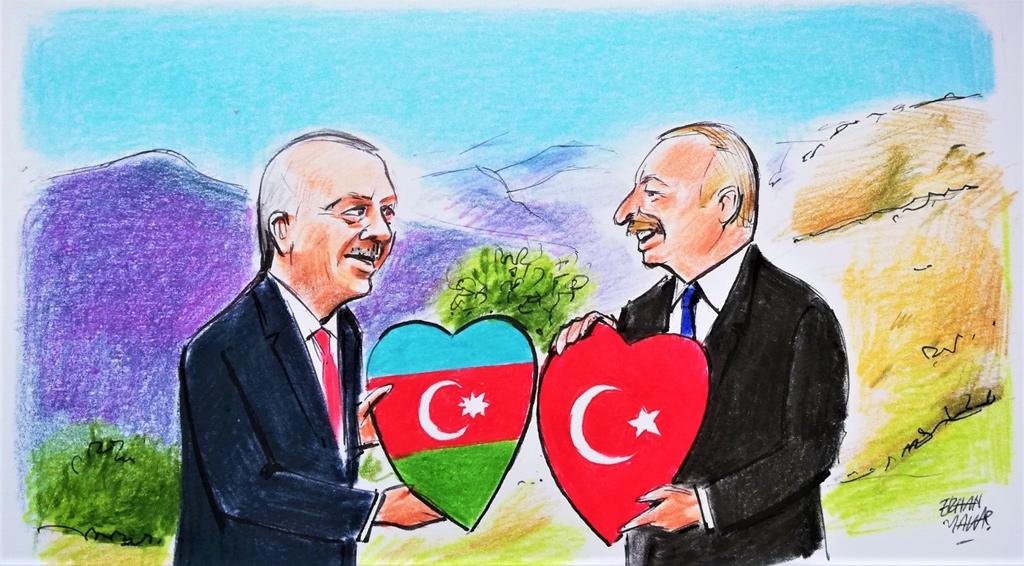 Turkey has been highly active in the international arena recently as all eyes were on the NATO summit and President Recep Tayyip Erdoğan’s meeting with United States President Joe Biden.

A high-level delegation, led by Foreign Minister Mevlüt Çavuşoğlu, paid a surprise visit to Tripoli for a series of critically important meetings.

It is no secret that various foreign stakeholders in Libya, which are unhappy with Turkey’s military presence in the country, have been calling for “all foreign forces” to withdraw.

Ahead of the recent NATO summit, it was important for Libya’s Government of National Accord (GNA) to resist such pressure.

The Turkish delegation’s visit thus served as a reminder to all relevant parties that Turkey’s forces were not a foreign element.

After all, there could have been no transition government or the Second Berlin Conference without Ankara’s intervention.

The Turkish troops, who liberated the Libyan capital from warlord Gen. Khalifa Haftar’s imminent occupation, cannot be equated with Russia’s Wagner Group or mercenaries from Chad and Sudan.

The Turkish president’s meeting with his U.S. counterpart in Brussels too was extremely important. After all, Biden did not hold bilateral meetings with any leader at the Belgian capital – with the notable exception of Erdoğan.

On a separate note, Bloomberg’s editorial, which claimed that Turkey had abandoned the West long ago and called on Biden to sever ties with Ankara at the NATO Summit, was utter nonsense.

On the contrary, the two leaders’ body language and statements at the summit signaled that the engagement was quite positive.

Indeed, the U.S. president told reporters that he had a “very good” talk with Erdoğan after their 45-minute tete-a-tete meeting.

For the record, that was hardly surprising. The global system is headed in a direction, which requires NATO and the U.S. to strengthen their relations with Turkey.

That’s why areas of cooperation – such as the administration of Kabul airport and Libya – had to take precedence over areas of disagreement.

That is exactly what happened in Brussels. Those anticipating a Biden-Erdoğan fight would do their best to save their appetite for the U.S. president’s meeting with Russia’s Vladimir Putin.

Biden’s attitude in Belgium seemed in line with Erdoğan’s call for a “new chapter” in Turkey-U.S. relations.

The Turkish president made it abundantly clear that the bilateral meeting took place in a positive atmosphere: “We agreed to use dialogue channels effectively and regularly, as two allies and strategic partners ought to do. We had a most useful and sincere discussion. We see that there is a strong will to mark the beginning of an efficient period of cooperation, in all areas, on the basis of mutual respect and interests.” He added that there was “no problem in Turkey-U.S. relations that did not have a solution.”

Erdoğan’s bilateral meetings with the leaders of Britain, France, Germany and Greece, too, concentrated on areas of cooperation.

It was noteworthy that Erdoğan and French President Emmanuel Macron began speaking about working together in Libya and Syria.

Furthermore, it must be taken into consideration that the final communique made references to the Syrian crisis and included a commitment to Turkey’s security measures.

The Brussels summit will be remembered as an event that consolidated Turkey’s position within the Western alliance.

The symbol of liberation

Erdoğan’s subsequent trip to Shusha, in turn, reflected the new realities of Turkish foreign policy. I was part of the official delegation that traveled to Azerbaijan this week to celebrate that country’s victory in Nagorno-Karabakh in its cultural capital of Shusha.

That trip instantly became a symbol of the fraternal bonds and common destiny between Turkey and Azerbaijan.

The Turkish president made valuable contributions to the liberation of Shusha, after 27 years of Armenian occupation, just as he prevented the fall of Tripoli, making the establishment of the Libyan transition government possible.

Moving forward, Ankara will concentrate even more on opportunities for cooperation in the Caucasus and Central Asia. That pursuit must be seen as an effort to promote stability and trade in the region – rather than a move against Russia or Iran.

To conclude, Erdoğan continued to cement his country’s recent foreign policy moves with his meetings on the NATO summit’s sidelines and his trip to Shusha.

NATO gathering: Back to basics or just confusion?
Next
Loading...
Loading...
We use cookies to ensure that we give you the best experience on our website. If you continue to use this site we will assume that you are happy with it.Ok