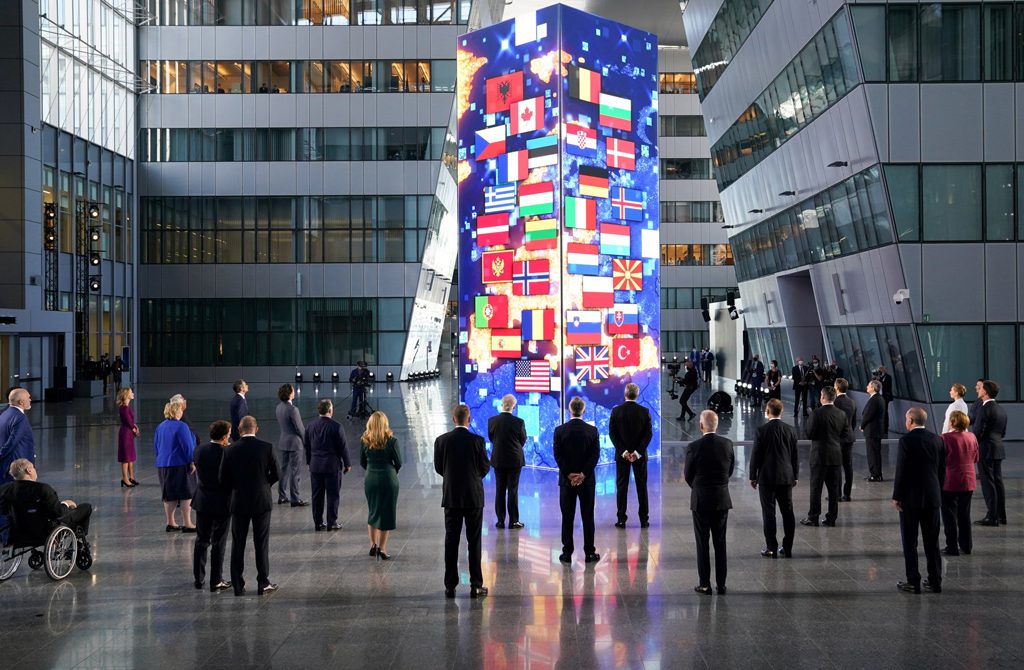 NATO heads of the states and governments look at a digital installation after posing for a family photo, during the NATO summit at the alliance's headquarters in Brussels, Belgium, June 14, 2021. (Reuters Photo)

Turkish and American politicians, media and the public had been waiting for the meeting between President Recep Tayyip Erdoğan and U.S. President Joe Biden on June 14, on the sidelines of the NATO Leaders Summit in Brussels.

Turkish and American politicians, media and the public had been waiting for the meeting between President Recep Tayyip Erdoğan and U.S. President Joe Biden on June 14, on the sidelines of the NATO Leaders Summit in Brussels.

Onlookers closely watched to see whether the two leaders would continue the already tense positions or open a new page in bilateral relations.

The one-on-one meeting lasted 45 minutes, after which Turkish and U.S. delegations held a joint meeting.

The images and pictures presented to the press were quite positive. Even before the meeting, the two leaders shared a friendly gesture and went to have a chat.

This was the first indication of the positive agenda during the meeting. Then, during the bilateral meeting, Biden and Erdoğan said that the meeting had gone well, and confirmed their willingness to restore the strained relations.

The two presidents, who were accompanied by large delegations, have preferred institutional diplomacy over leadership diplomacy.

During their respective press conferences, the two presidents reiterated their positive outlook and determination to repair bilateral relations.

Erdoğan pointed out that there is no problem between the two countries that cannot be solved through mutual respect and interests.

Biden also explained that the meeting with Erdoğan was positive and real progress will be made between the two countries.

There are some significant issues on which the two countries can cooperate, one being the security of Afghanistan.

NATO fears that Russia and/or China may easily fill the power vacuum in the country following the withdrawal of U.S. and NATO forces.

However, there are some vital issues that the two countries disagree on. One is the fight against global terrorism. Turkey expects countries not to have double standards in fighting terrorism, however, the U.S. continues to support the YPG, the Syrian branch of the PKK. In other words, Ankara expects the U.S. to end its support to YPG.

Another significant issue that cannot be resolved in a short period of time is the S-400 dispute. No progress was made on the issue during the meeting.

The two sides agreed to continue the negotiations. Turkey expects the U.S. to end sanctions imposed on Turkey’s military procurement agency for the purchase of S-400s and to readmit Turkey into the F-35 program.

Ankara and Washington agreed to focus on areas of cooperation and opportunities in both bilateral and regional issues and to discuss the ongoing divergences.

The two states agreed to keep dialogue channels open and the meeting paved the way for the handling of all bilateral issues through negotiations.

Diplomatically, this means that not many issues were resolved at the meeting and they will continue to be discussed in future meetings

All in all, despite the misinformation and misperception against Turkey in the U.S., the pressure from the anti-Turkish wing of the Democrats and Biden’s recognition of the 1915 events as genocide, the meeting between Erdoğan and Biden was quite positive and fruitful.

When we compare the Erdoğan-Biden meeting with the previous meetings between the Turkish and the U.S. presidents, it is obvious that the latest one was very positive and therefore can be considered a milestone in bilateral relations.

Nobody was expecting the resolution of all problems between the two countries. The main expectation was to change the course of bilateral relations. In other words, the main objective of the meeting was to stop the escalation of tension and to set a positive agenda. It seems that this objective was achieved. Therefore, the meeting can be considered a turning point in Turkish-American relations.

Furthermore, unlike the previous NATO summits, in general, there was a positive atmosphere. All leaders approached one another with a positive agenda.

For instance, not only Biden but also other leaders such as French President Emmanuel Macron, German Chancellor Angela Merkel and Greek Prime Minister Kyriakos Mitsotakis met with Erdoğan and expressed that the meetings were constructive and fruitful.

The summit, which attempted to consolidate the NATO alliance and to emphasize its importance for member states, was successful in achieving this objective.

This general positive atmosphere of the summit contributed to the Erdoğan-Biden meeting.

From Brussels to Shusha, Erdoğan’s diplomacy takes hold
Next
Loading...
Loading...
We use cookies to ensure that we give you the best experience on our website. If you continue to use this site we will assume that you are happy with it.Ok