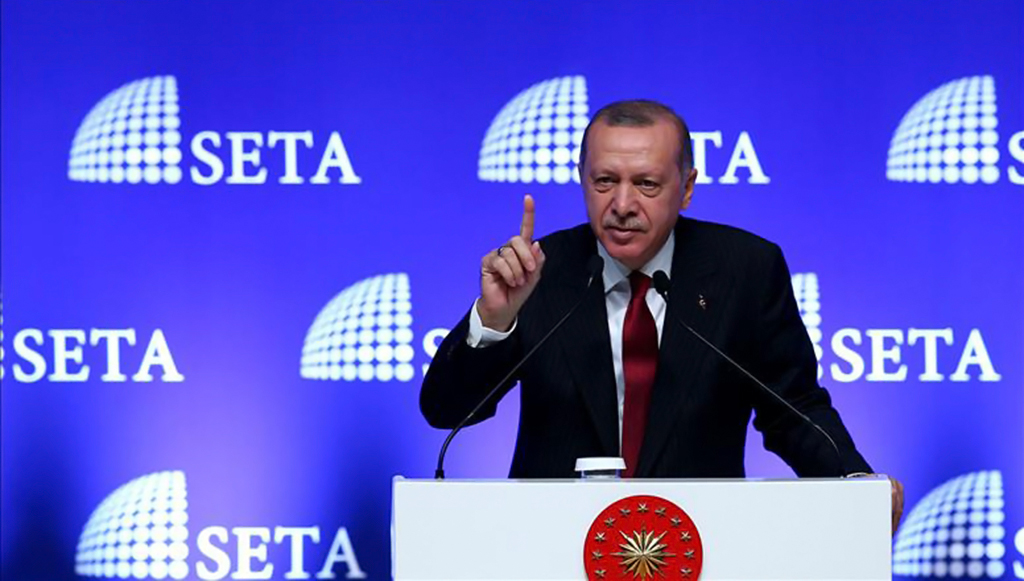 Nowadays, all eyes are fixed on the relations between Turkey and the United States. Against the backdrop of tensions, the Justice and Development Party (AK Party) celebrated its 17th birthday at an event hosted by the Foundation for Political, Economic and Social Research (SETA) on Tuesday.

Nowadays, all eyes are fixed on the relations between Turkey and the United States. Against the backdrop of tensions, the Justice and Development Party (AK Party) celebrated its 17th birthday at an event hosted by the Foundation for Political, Economic and Social Research (SETA) on Tuesday.

President Recep Tayyip Erdoğan, along with a large number of cabinet ministers and party members, engaged in detailed discussions about the roots of the movement’s success. This weekend, the AK Party will hold its Sixth Ordinary Congress to create a new team of executives that will be responsible for maintaining contact with the electorate as Turkey starts implementing the presidential system. The party’s new central executive board and decision-making body will reflect a combination of continuity and change. Unlike the country’s opposition parties, who have been crippled by internal tensions since the June 24 elections, the AK Party will get a face-lift without complications.

In recent years, the AK Party achieved extraordinary success in Turkish politics. Needless to say, the movement’s ability to stay in power for 16 consecutive years attests to that fact. The driving forces behind its success, however, has been inadequately analyzed at home and abroad.

As Turkey’s current troubles with the U.S. and, to some degree, earlier problems with the European Union suggest, the AK Party aspires to redefine the country’s role in the international arena. Its leadership, full of determination, makes it possible for the movement to transform itself – along with Turkey.

Over the past 16 years, there have been three main factors behind the AK Party’s success:

1) The movement’s ability to learn from its mistakes and make necessary changes without delay – despite being in power;

3) The AK Party’s ability to make changes to personnel without causing friction.

Perhaps one more thing, which is unprecedented: Its ability to overcome crises and derive power from them.

Since the adoption of multiparty democracy, Turkey has been all too familiar with political parties coming to power on the back of a crisis only to fall from grace due to turmoil.

In 1950, the Democratic Party (DP) came to power by tapping into the popular reaction against the authoritarianism of the single-party regime. For a whole decade, it tried to call the shots in Turkey. Having proven invincible in the 1954 and 1957 elections, the movement was toppled by a coalition of Kemalist guardianship forces in 1960.

The people’s response to the unjust treatment of Adnan Menderes, the DP government’s popular prime minister, was to create a single-party government under the Justice Party (AP) in 1965-71. The AP government was removed from power by another military intervention.

In the 1970s, Turkey witnessed first-hand the instability of coalition governments. The Motherland Party (ANAP), which came to power after the 1980 coup d’état, won the 1983 elections, but could not maintain its popularity in the following years.

Economic hardship, which began in 1987, ushered in a new era of coalition governments four years later. The 1990s were a dark decade: The rise of the PKK terrorist organization, the Feb. 28 process, and the 1994 and 2001 financial crises laid the groundwork for a new political movement.

Having come to power in 2002, the AK Party broke with tradition over the past 16 years. It successfully transformed itself and the country. At the same time, it proved resilient to crises to establish that political parties were not destined to come to power or leave due to crises.

Some of the AK Party-era crises in Turkey included the 2007 presidential election, the Gezi Park revolts and the judicial coup attempt of 2013, the June 2015 election and the July 15, 2016 coup attempt. The AK Party proved uniquely capable of overcoming those major crises, any of which would have brought down governments in the past, and, more important, derived power from them.

By the same token, the most recent tensions with the U.S. and the assault against the Turkish lira are nothing but a new source of energy for Turkey and the AK Party.

US growing isolated in international system under Trump
Next
Loading...
Loading...
We use cookies to ensure that we give you the best experience on our website. If you continue to use this site we will assume that you are happy with it.Ok