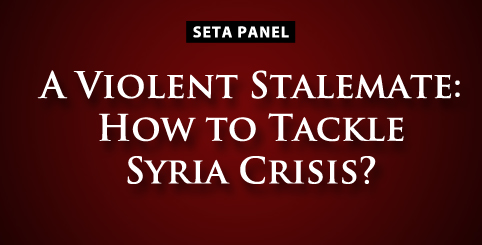 A Violent Stalemate: How to Tackle Syria Crisis?

More than a year passed since the Arab awakening met Assad regime’s defiance in Syria. This time period demonstrated rather ominously that Syria was to follow a unique roadmap towards change. Regime’s violent breakdown on the opposition, opposition’s failure to build capacity to deliver change, and absence of consensus among the international community regarding Syria have led to a violent stalemate in Syria. While regional and international initiatives are failing one by one, obscurity prevails as to the conflict resolution in Syria. What options are we left with in Syria? While the violence regenerates itself in Syria, is a political solution still viable? How long more can the Assad regime defy the Arab awakening? Is international community’s paralysis curable?

Steven Heydemann serves as senior adviser for Middle East Initiatives at United States Institute of Peace (USIP). Heydemann is a political scientist who specializes in the comparative politics and the political economy of the Middle East, with a particular focus on Syria.

Muhittin Ataman is a professor of international relations at Abant Izzet Baysal University. Prof. Ataman also serves as a researcher at SETA Foundation and currently works on Syria and Saudi Arabia. He is the author of a recently published SETA Report  entitled “Power Struggle in Syria”.  Note: The event will be held in English.

Media, Arab Awakening and the Middle Eastern Politics
Previous
Houla and al-Assad
Next
Loading...
Loading...
We use cookies to ensure that we give you the best experience on our website. If you continue to use this site we will assume that you are happy with it.Ok