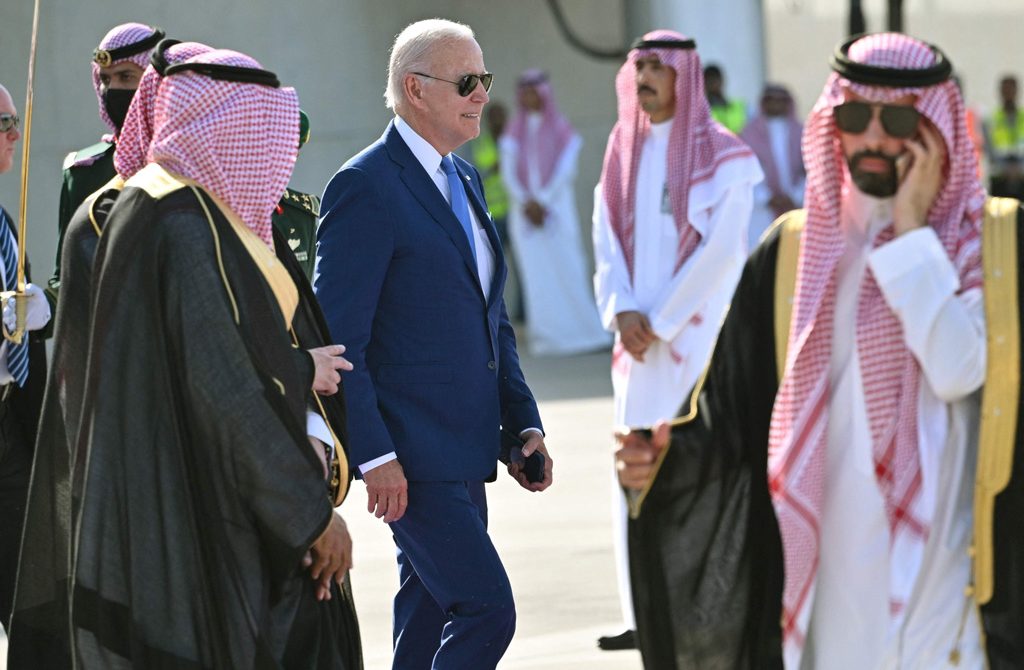 U.S. President Joe Biden paid a three-day official visit to the Middle East between July 13-16 in order to renew its engagement with the region and strengthen its strategic partnership with the regional allies.

U.S. President Joe Biden paid a three-day official visit to the Middle East between July 13-16 in order to renew its engagement with the region and strengthen its strategic partnership with the regional allies. After meeting with the Israeli and Palestinian leaders, Biden met with the Arab leaders. However, the last three American administrations expressed their determination to withdraw from the Middle East and focus on China’s rise. But now, they find it difficult to allow Russia and possibly China to fill the power vacuum in the Middle East.

Biden withdrew the American troops from Afghanistan and left the country to the Taliban, the political faction that used to control the country before the American invasion. In other words, after spending billions of dollars and killing thousands of people, including civilians, the U.S. left Afghanistan to its previous status quo. He insistently pointed out that he will sign a new nuclear deal with Iran, but so far, he could not achieve it. In addition, the U.S. has cooled off its relations with Saudi Arabia, the United Arab Emirates (UAE) and Türkiye due to Biden’s statements against these countries. Furthermore, Biden’s otherization compelled regional states to initiate a multidimensional normalization process immediately after he came to power, at the beginning of 2021.

Then, what has forced the U.S. to return to the Middle East and rapprochement with the regional states? When observed closely, we can see several important regional and global reasons for Biden’s visit. First of all, the prolonged war between Russia and Ukraine has increased the importance of the region and therefore forced the U.S. president to visit. One of the apparent side effects of the Russia-Ukraine war is the instability of the energy market. The West, including the U.S., has recognized the region’s crucial role in the global energy market, which was destabilized after the Russian invasion of Ukraine. Observers have claimed that Biden asked the Gulf leaders to increase the production of oil and natural gas in order to maintain the skyrocketing energy prices.

Another side effect of the Ukrainian war is the global food crisis and supply chain disruptions. The Middle East plays a critical role in this issue as well. Biden met with regional leaders, not only those of the Gulf but also leaders of Jordan and Egypt, to mitigate the adverse effects of the Ukrainian war.

Secondly, the great power competition has forced the U.S. to return to the Middle East in order to contain the expansion of the Russian and Chinese influence in the region. The U.S. believes it can limit the great power competition in their respective regions, namely Eastern Europe and the South China Sea. However, the ripple effects of the Ukrainian war are worldwide. Any direct or indirect friction between the two global powers surely has global implications. The changing dynamics force all states to take certain positions to maximize their national interests. Therefore, global powers have to persuade the middle and even small states for their support in their struggles. In other words, Biden visited the region to persuade the regional leaders to support the Western position in the Ukrainian War and isolate Russia.

Thirdly, the new regional dynamic is another factor that forced the U.S. to reengage with the Middle Eastern countries. The American disengagement from the region and Biden’s political rhetoric against certain regional states pushed them to unite and improve their intra-regional cooperation to sustain a potential American pressure. Therefore, Biden’s visit can be considered another attempt to consolidate the Gulf states and their allies against Iran. However, two contradictory benefits could be ripped out from this step. One is the re-division of the region and thus satisfying the Israeli expectation of isolating Iran from the regional balances. The second is to force Iran to restart the nuclear deal negotiations. Therefore, Biden has met with the leaders of all regional anti-Shiite states, who may need American protection and support against the possible Iranian expansionism. However, it seems that the Arab Gulf states, which have been trying to initiate a rapprochement process with Iran and ease the Arab-Iran tension, will not follow the American footstep.

For now, it is not clear whether the U.S. will achieve these objectives or not. However, it seems that it will not be easy as earlier. There are several important reasons from both sides that may prevent this. First of all, the U.S. still does not want to directly associate with any Middle Eastern crisis. The U.S., which needs recovery in the Middle East, will try to abstain from increasing regional tension that it cannot control.

Second, considering Biden’s explanations in Israel and Palestine, the U.S. position will unlikely change the group reality. On the one hand, Biden claimed he is a “Zionist,” although he is not a Jew. On the other hand, he has declared his support for the “two-state solution” in Palestine. Even though the U.S. tries to return to its long-time relatively balanced policy toward the Israeli-Palestinian question and negotiate as a mediator between the two sides, the Biden administration will not be able to undo former U.S. President Donald Trump’s political moves.

Overall, I do not expect Biden’s visit to the Middle East will change the current pace of regional developments and reverse the process. The more powerful states will continue to fait accompli and violate rules and principles of international law. Western countries, including the U.S., that lost their moral superiority will continue to behave selectively and arbitrarily. Therefore, Biden could not raise the issues, such as Jamal Khashoggi and the arms embargo. Biden had to defend his visit to Saudi Arabia, the state he had harshly criticized before he came to power, and has now written an article justifying his visit. This also shows the challenge and difficulty of his regional perspective and his visit to the region.

What is next after Boris Johnson?
Next
Loading...
Loading...
We use cookies to ensure that we give you the best experience on our website. If you continue to use this site we will assume that you are happy with it.Ok