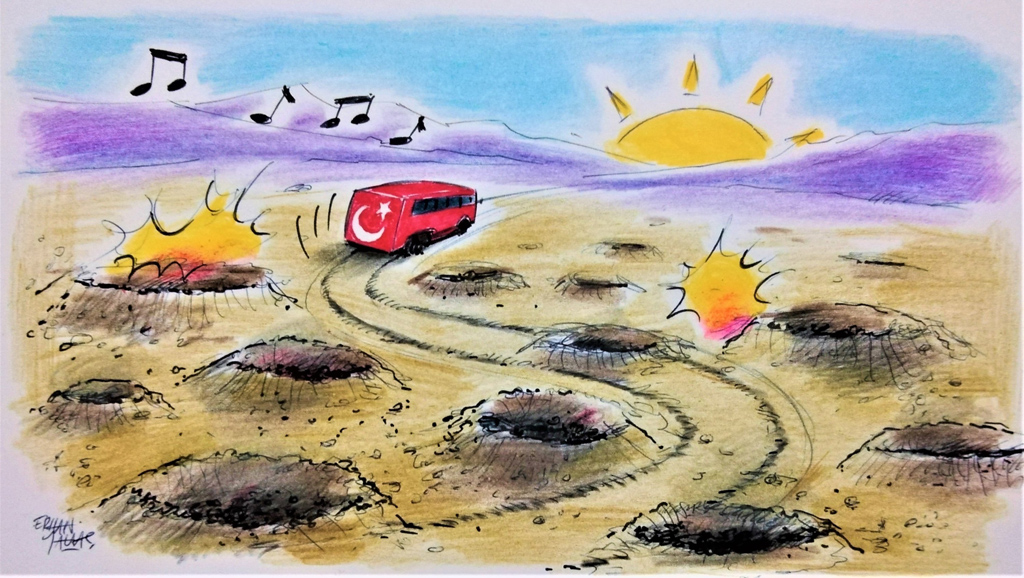 On the way | Illustration by Erhan Yalvaç.

Why is the Turkish opposition against Ankara’s normalization?

The Turkish government's new diplomatic initiative with its regional and global partners is based on logic, while the opposition still has no idea why it rejects the process

The Turkish opposition is unhappy about the normalization process with the United Arab Emirates (UAE) and Israel. Ironically, they used to criticize the government for the tensions that arose with those countries when defending Turkey’s national interests. Indeed, the opposition leaders used to claim that Turkey had “run out of friends.” Likewise, they opposed Turkey’s military presence in Syria, Libya and Karabakh by saying that the country had “no business there.” Claiming that the tensions with the United States (over the YPG/PKK, the Gülenist Terror Group (FETÖ) and the S-400 deal) and the European Union (over Turkish interests in the Eastern Mediterranean) hurt the country, the opposition promised a new era of diplomacy.

Turkey, however, was never hostile to countries with which it experienced tensions. Ankara merely looked out for its own interests. The country also used its military to combat terrorism and promote stability. Ankara’s actions in Syria, Iraq, Libya and Karabakh attest to that fact. Most recently, the Turkish government has pursued normalization with some countries that have abandoned their anti-Turkish policy due to changes in the global and regional system.

Both the Gulf states and Israel witness Iran’s growing strength with grave concern. Still, Turkey remains quite concerned about Palestine and the Al-Aqsa Mosque. Notwithstanding, the opposition keeps targeting the normalization process by associating it with a “lack of principles,” “incoherence” and “concessions.”

The Turkish people are already familiar with the opposition’s problematic approach to questions of national security and national interest, with an eye on scoring political points on the domestic front quite frequently. The fact that the main opposition Republican People’s Party (CHP) voted against military operations in Iraq and Syria reflects that attitude. Yet the most interesting criticism toward the normalization with the UAE came from Ali Babacan, who chairs the Democracy and Progress Party (DEVA). He reminded the public that the government had accused that country of being “behind the July 15, 2016 coup attempt.”

As I already noted, Turkey did not subscribe to a hostile or subversive policy in dealing with its adversaries. It gave diplomacy a chance when those nations abandoned such policies. The obvious question here is whether the brain trust behind that question has forgotten that the founder of FETÖ continues to live in the United States without facing a single investigation. What course of action do they expect Turkey to take, if not diplomacy? If anything, Babacan should answer the following question: How can he stomach CHP Chairperson Kemal Kılıçdaroğlu’s past description of July 15 as a “controlled coup” (let alone his anti-hijab position), since the former finance minister took a seat at Kılıçdaroğlu’s roundtable?

Needless to say, the opposition is unhappy because they think that the policy of normalization helps the government regain its strength. What really unsettles them, however, is that the ruling Justice and Development Party (AK Party), under President Recep Tayyip Erdoğan’s leadership, has always been able to communicate its foreign policy to its base and present it as a success. Indeed, the president has been able to tell the Turkish people the reasons behind Turkey’s EU membership bid as well as the escalation with bloc members over Turkish interests and sovereignty. He is able to explain why Turkey bought the S-400 air defense system and argued with Washington over the YPG/PKK and FETÖ, just as he effectively communicated his engagement with former U.S. President Donald Trump’s administration as well as his wish to start a new chapter with U.S. President Joe Biden’s administration. Erdoğan has accomplished the same thing whilst criticizing (and pursuing normalization with) the UAE, Israel and Egypt.

The Turkish president owes that success to his authenticity, flexibility, autonomy, ability to accurately interpret changing circumstances, his leader-to-leader diplomacy and commitment to capacity-building. More important is that Erdoğan has successfully struck a balance between domestic politics, foreign policy and the economy.

Domestic politics refers to all policy choices, services and discourse related to questions of identity, reforms, counterterrorism and defense. Foreign policy covers Turkey’s relations, alliances and diplomatic tensions with the great powers as well as military interventions, the capacity of its defense industry and its critical discourse on the international system. Last but not least, the economy refers to growth, exports, creating jobs, income distribution and welfare.

At a time when Turkey is dealing with inflation, there are obviously problems in all three areas – starting with the economy. Yet there had been no shortage of challenges in the past either. Notwithstanding, Erdoğan has proved capable of managing those processes whilst taking into consideration how they interact with each other. He thus won every single election he contested and has successfully passed constitutional amendments. His hard work and leadership skills facilitated those accomplishments. Certainly, Erdoğan stands to deliver a similar performance in the 2023 election.

Russia's Vladimir Putin pulls the trigger
Next
Loading...
Loading...
We use cookies to ensure that we give you the best experience on our website. If you continue to use this site we will assume that you are happy with it.Ok