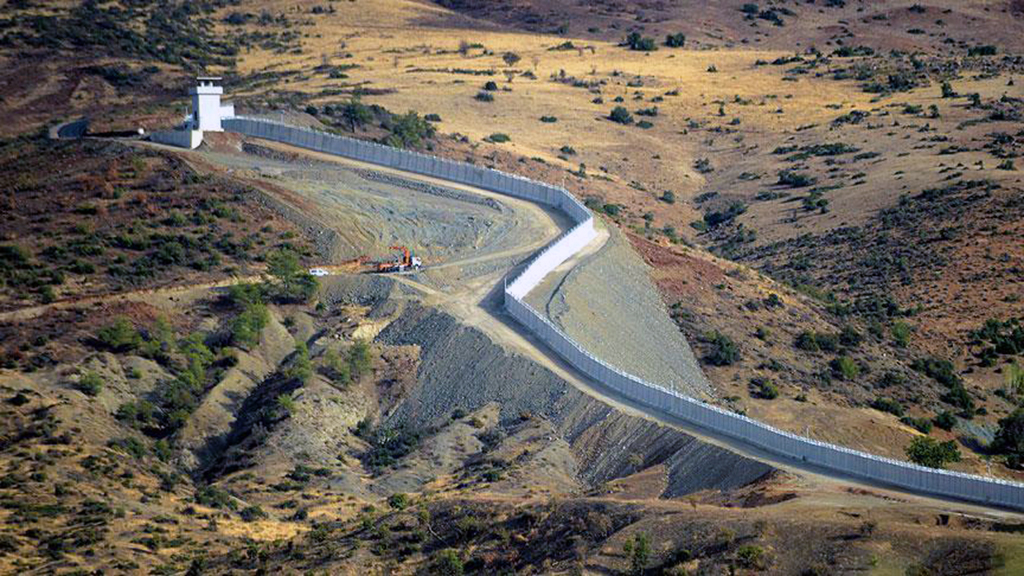 Turkey’s great wall and its archenemy on the Syrian border

Turkey's plan to build a wall on the Syrian border ruins the YPG's plans, and that is why it is trying to do its best to prevent the construction of the wall by killing workers

On Dec. 13, 2017, a number of social media accounts claimed the PKK’s Syrian affiliate People’s Protection Units (YPG) shot a Turkish construction worker while he was working on the construction of a wall on the Turkish-Syrian border. In addition, it was also claimed that YPG elements destroyed a Turkish Armed Forces (TSK) armored vehicle stationed on the border, killing two Turkish border guards and wounding scores more. There were also reports of TSK retaliation with artillery fire on YPG elements in the area.

The incident was reported to have taken place on the Turkish-Syrian border near the village of Ashmah, which is west of the town of Kobane in northern Aleppo, Syria. In the footage shared by the same social media accounts, a military vehicle is seen smoking from a distance, purportedly one of the TSK vehicles hit by YPG elements. Furthermore, a number of YPG militants are also seen firing machine guns and infantry rifles from inside a building, apparently at Turkish border guards. Since Turkish authorities have not confirmed or denied either the claims or footage, it is still not clear whether they are authentic or not.

To begin with, regardless of whether or not the claims and footage are authentic, the YPG has the military capacity to attack Turkish border guards and it is very likely that it had the intention to do so, since there has been ubiquitous hostility between the two, with Turkey epitomizing the archenemy for the PKK and Ankara denouncing the YPG as a terrorist organization.

Secondly, low-intensity and intermittent fire exchanges between the TSK and YPG are a recurring phenomenon since the YPG has become a territorial actor and Turkey’s neighbor in northern Syria. Thirdly, regarding this specific incident, the construction of a wall on the Turkish-Syrian border is not in the YPG’s interest. The construction of a concrete wall on the 911-kilometer Turkish-Syrian border has been underway with a decree from Ankara since mid-2015, and it is is expected to be the third-longest border wall in the world after the Great Wall of China and the border walls on the U.S.-Mexican border. The construction constitutes only one pillar of a comprehensive border security mechanism Ankara embraced in July, 2015, due to multiple and multi-faceted threats emanating from northern Syria. Since then, Turkey has been boosting the physical security mechanisms on its Syrian border, which has resulted in the completion of 781 kilometers of the concrete wall as of today.

The ongoing construction and the fact that it is coming to an end seems to have acted as the spark for the YPG’s attack on workers building the wall and the border guards protecting them. Hence, the motivation of the local YPG militants at the site was arguably to deter construction.

So why does the YPG not want the border wall? First, it is not only about a concrete wall on the border. Concerning the Physical Border Security System (PBSS), Turkey has been equipping the border with trenches, razor wire barriers, night vision systems, thermal cameras, both manned and unmanned watchtowers, patrol roads, unmanned aerial vehicles (UAVs), lighting systems, balloons, armored vehicles, acoustic sensors, remote controlled weapon systems (RCWS) and other tech-intensive tools. These elements altogether make the exploitation of the border much more difficult, which the PKK and YPG do not want for a number of reasons. First, a more strictly protected border would hinder smuggling to a great extent and the implications of this would be manifold. It would one, restrict smuggling activities – the most common is oil smuggling – depriving the PKK and YPG of revenue; two, the restriction of smuggling also means clearing away the safe routes for smugglers, which happen to also be used by the PKK and YPG to cross into Turkey; and three, the eradication of safe routes would also inhibit the mobilization of the many foreign terrorist fighters who have joined the YPG.

Second, a border fortified with such physical and technical measures would dissuade YPG elements from carrying out sporadic attacks on Turkish border guards like the latest one near Ashmah on Dec. 13, 2017. Even when they do, their capacity to inflict material and human damage on Turkish security forces will be very limited thanks to the reinforced border security mechanisms under the PBSS. Thirdly, the border wall and the accompanying physical and technical measures would sever the YPG’s physical contact with Turkey’s Kurdish population in border areas over which the former had enjoyed a certain level of influence in the forms of recruitment and fomenting Kurdish nationalism until mid-2015. Thus, the YPG has good reasons to oppose the construction of the border wall in particular and the increased level of security.

It should be noted, however, that building a wall on the Syrian border has never been Ankara’s first choice. Since the very beginning of this decade, Turkey preferred to view its borders, and especially its Syrian border, as an element of social, economic and cultural interaction between locals on both sides of the border, be they Arabs, Kurds or Turkmens, and not as an element of security. Nevertheless, the eruption of the Syrian civil war and the subsequent territorial and military change in northern Syria’s landscape in the form of the YPG and Daesh’s control of certain areas dictated the necessity to take firm security measures.

Since Daesh has now been cleared from Turkey’s Syrian border thanks to Operation Euphrates Shield, the presence of the YPG in northern Syria will remain the most serious border threat to Turkey’s security in the future. In the face of solid security measures on the border and a contracted capacity to harm Turkey, the YPG is expected to employ a discourse based on human rights that would accuse Turkey of cutting ethnic, social and cultural ties of local Kurds in order to put pressure on Ankara.

New phase of Turkey's struggle for its security in Syria
Previous

How to understand US stance on Operation Olive Branch
Next
Loading...
Loading...
We use cookies to ensure that we give you the best experience on our website. If you continue to use this site we will assume that you are happy with it.Ok