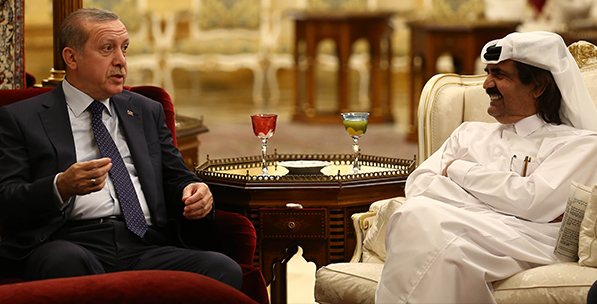 Qatar and Turkey are mutually dependent on one other in stabilizing their domestic politics and normalizing the region.

Turkey, with its massive military power and lucrative developing economy, and Qatar, with its large amount of natural gas resources and effective diplomatic prowess, are two emerging powers in the Middle East as vigorous countries in conflict resolution processes and claiming for the gradual regional transformation. They took similar positions towards the Arab Uprisings. Both countries have been supporting popular movements against the pro-status quo regimes. They have been backing the Syrian opposition against the Assad regime and have been searching for an Assad-free Syria. As the only two regional countries, Turkey and Qatar supported the Mursi government and the Muslim Brotherhood against the military coup. They have been opposing the international efforts trying to isolate the Hamas leadership and the Muslim Brotherhood. They also collaborate against the Iranian expansionism and its destabilizing regional undertakings.

Turkey and Qatar have been enjoying a close cooperation and affinity for the last fifteen years. Multi-dimensional bilateral relationship was developed in different fields. Often high level visits are only one of the indications of close relations. The military agreement signed last year postulating the establishment of a Turkish military base in Qatar is the peak of bilateral cooperation. With this agreement, the two countries began to improve their security and military interactions as well as their economic and social relations. This will facilitate the Turkish entrance into the international arms market and ensure the diversification in the Qatari weaponry system.

Qatar and Turkey are mutually dependent on one other in stabilizing their domestic politics and normalizing the region. Civil wars in Syria, Iraq and Yemen; interventionist and expansionist foreign policy of Iran; and the emergence of DAESH as a threat to all regional countries push both Turkey and Qatar to cooperate in the short and middle run. The transforming character of the regional situation makes new partnership opportunities possible to implement. For Turkey, to achieve its regional goals, it needs to develop its relations with Qatar, which experiences political and economic stability within the region in turmoil and enjoy vast amount of energy resources. For Qatar, Turkey is the best political and economic partner in the region. Turkey is the only regional power to balance the Iranian influence and its penetration in the region. Furthermore, Turkey’s economy is very attractive for the Qatari investors, who need to diversify their economy.

There are many areas in which Turley and Qatar can improve their bilateral relationship. First of all, they can take joint initiatives in regional mediation efforts and take similar positions in regional and international platforms. Second, they have a big potential to improve their cooperation in energy sector, especially after the most recent tension between Turkey and Russia. A gas pipeline proposed in 2009 may be revitalized in order to foster energy trade between the two states. This project may consolidate mutual trust and interdependency. Third, social and cultural commonalities between Turkey and Qatar make the partnership in fields such as tourism and education effectively feasible and promising.

CHALLENGES FOR TURKEY AND QATAR

Even though Turkey and Qatar are the two countries relatively less effected by the Arab Uprisings, both countries are not immune from the transformative effects of the new regional order. The political, economic and social situation in neighboring countries is highly challenging for Turkey’s stability. Qatar is also surrounded by increasing external and internal security threats. In spite of many commonalities between the two countries, there are several challenges directed to Turkish-Qatari relationship.

First of all, both countries have different and sometimes conflicting linkages with other regional and international powers. For instance, while Qatar is a member of the Gulf Cooperation Council and the Arab League, Turkey is a member of many Western organizations. Second, as a small Gulf state, Qatar is generally under the influence of Saudi Arabia, the major power of the Gulf only after Iran. Saudi Arabia claims for regional hegemony in the Arab side of the Gulf. Third, in spite of their complementary economic structures, their respective trade volume and shares in one another’s economy is quite low. They need to improve their economic relationship in near future.

Why is Russia Trying to Escalate the Crisis?
Previous

The Propaganda Offensive Hurts Russia
Next
Loading...
Loading...
We use cookies to ensure that we give you the best experience on our website. If you continue to use this site we will assume that you are happy with it.Ok