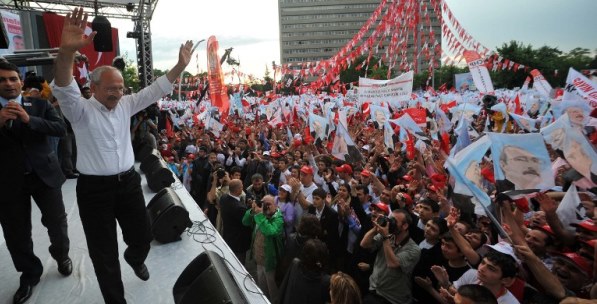 The Turkish Political Landscape and the CHP

The biggest obstacle standing in front of the opposition to expand its constituency geographically is its unwillingness to break out of its comfort zone.

The outcome of the March 30 local elections rendered Turkey’s political landscape since 2007 even more visible, allowing detailed analyses to be drawn. Those who look at this map and infer “division” are mistaken. The political landscape that emerged shows “dispersion” and not “division.” The dispersion is not a moment captured in the snapshot. On the contrary, it has become a prevalent trend that appears to be persistent. From the Justice and Development Party’s (AK Party) perspective, the landscape shows the potential for expansion. This can be easily evinced from the increase in the AK Party’s votes in the 74 cities, including the cities it lost. Therefore, it could be said that the more the AK Party pushes its own potential, the more it forces the opposition’s boundaries.

As long as this trend continues, the AK Party will continue to force the opposition to either rise up to increase its votes or accept a loss in their share. This situation is not sustainable for the opposition. Even if the Republican People’s Party (CHP) increases its share of votes by 20 percent and reach 30 percent overall, it will never reach any kind of political depth in Turkey unless it develops strategy to change the geographical concentration of its constituency. This applies to other opposition parties as well.

The biggest obstacle standing in front of the opposition to expand its constituency geographically is its unwillingness to break out of its comfort zone. It is impossible for the opposition to expand its constituency geographically without causing discontent in its existing constituency. It is impossible without overcoming Kemalism or Turkish nationalism. Our political history is marked by political movements that, when faced with a crisis, chose to split instead of taking on the risk of transformation.

Most governments, if not all, both from the right and the left, emerged out of these movements. The CHP-DSP, MHP-BBP and RP-AK Party splits are the closest examples of this. Although there is no evidence pointing to another Democratic Left Party (DSP) scenario from the CHP at this point, the patterns of Turkish political history cannot be overlooked.

At this point a split similar to the SHP-HEP (Social Democratic People’s Party-People’s Labor Party) scenario is probable. A branching out in the CHP, unlike the DSP splits, but similar to the splits in the Kurdish political movement in the past, is also probable. Thus, it is imperative to recognize the juvenile attempts of those who interpret Turkey’s landscape as a narrative of division to hide the approaching disaster. Since it is impossible for the CHP to reach out to all segments in Turkey’s political landscape only by appealing to the elites, it is important that it decides on the strategy it will follow with the Kemalists in the party in the future. Or the Kemalists need to decide on what to do with the new CHP elites. After all, the current situation is not unlike the SHP-HEP separation. After that separation in 1992, the years with Deniz Baykal at the helm began.

It is clear that current party leader Kemal Kılıçdaroglu can manage the crisis for a little while longer.

However, if the outcomes of all future elections are the same, there seems to be no realistic point for the Kemalist core cadre to remain idle. That is to say, voters will rightfully question, as they have done in the past, why they should endlessly give their support to “a team” assembled with the promise of expanding the party’s reach to different demographics after they have clearly failed.

Toward the End of Geopolitical Pluralism in Central Asia?
Previous

Challenging Narratives and Remembering Syria
Next
Loading...
Loading...
We use cookies to ensure that we give you the best experience on our website. If you continue to use this site we will assume that you are happy with it.Ok