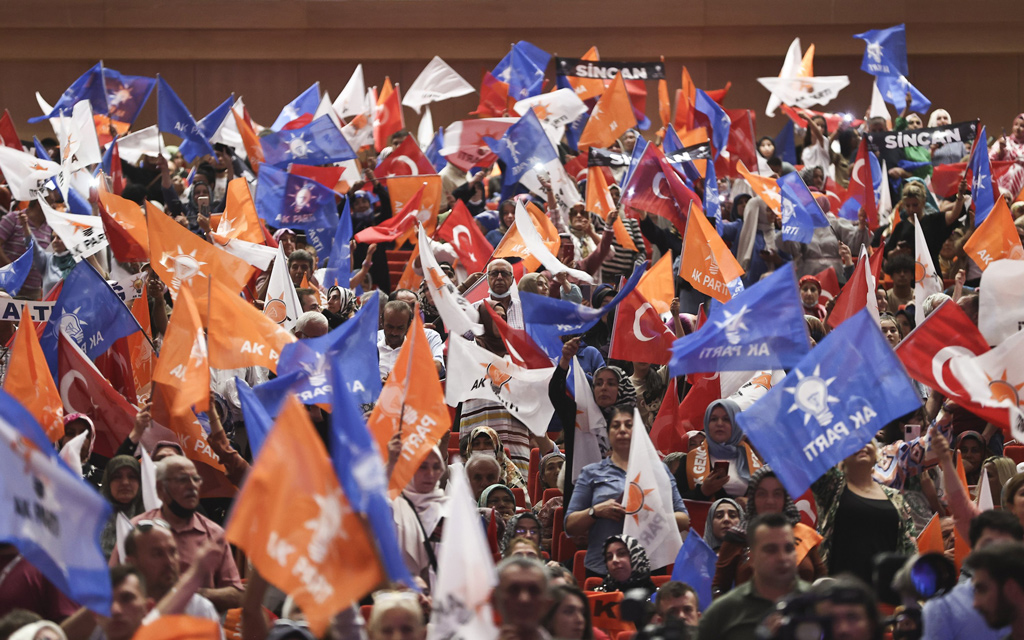 Supporters of the Justice and Development Party (AK Party) wave their flags at the AK Party's 21st founding anniversary in ATO Congresium in the capital Ankara, Türkiye, Aug. 15, 2022. (AA Photo)

The power and future of the AK Party

Türkiye’s ruling Justice and Development Party (AK Party) celebrated its 21st birthday on Monday. Having formed a single-party government just 14 months after its establishment and remaining in power for 20 consecutive years, the movement represents the most exceptional political party in the history of Turkish democracy. Undoubtedly, President Recep Tayyip Erdoğan’s political performance, leadership and popular support have been the driving force behind the AK Party’s ability to win every single election during that period.

Although the AK Party originally blended the legacy of the Democratic Party (DP), the National Outlook and the Motherland Party (ANAP), its fate was notably different from all those movements. It came to power in a situation in which coup plotters alone made critical or exceptional decisions, and proved that politicians had what it takes to transform Türkiye. Hence its extraordinary influence over Turkish political life.

Indeed, thwarting the July 15, 2016 coup attempt and adopting a new system of government alone were unprecedented in democratic politics. In the end, the AK Party could not be toppled by a military coup, like the DP, or quickly erode like the ANAP.

The long and consequential tenure of the AK Party and Erdoğan has been praised and criticized at home and abroad. Such is the nature of politics. Many things are bound to be said about a political movement and its leader, for whom some 70% of all citizens have voted at some point.

That the AK Party remains Türkiye’s most popular movement, despite economic challenges and the toll of two decades in charge, ahead of next year’s elections is something that the opposition’s mentors find difficult to explain. In truth, the defining features of that party and its leader are dynamism, high performance, the ability to reinvent themselves and the capacity for adaptation.

The AK Party’s popularity is not due to its emergence as an “identity party” by ceasing to be a mass party. What those analysts fail to grasp is that the AK Party was never strictly an identity party – that its power rests elsewhere.

The AK Party defined itself as “conservative democratic” because it viewed itself in sync with the modern world and national values. It resorted to certain concepts like “our civilization” and “native-national” due to the importance, which it attaches to the Turkish people for representing the ideals of the civilization, to which it belongs. It brought together those three identity-related discourses with contemporary challenges. Accordingly, AK Party politicians blend their political mission with their movement’s role as a mass party.

Other factors that preserve the dynamism of the AK Party and its leader include their ability to address the demands of various social groups, blending reform and struggle, and developing policies capable of responding to developments in the international system.

The most critical issue, however, is Erdoğan’s ability to build an interactive bridge between foreign policy and domestic politics. He skillfully tapped that talent while implementing European Union reforms, during the Arab revolts and amid tensions with Western governments in 2013 and since 2016. Having delivered a similar performance during the coronavirus pandemic, too, the Turkish president has made more progress on the diplomatic front than any other leader, as the Ukraine war’s sixth month approaches its end. Erdoğan successfully communicates escalation and normalization policies to the electorate. He is equally capable of explaining why he pursues integration with the EU, tensions in the Eastern Mediterranean and rapprochement with Russia to his own base.

Next year’s elections will represent a new challenge for the AK Party. The movement must find a way to account for the toll of being at the helm as well as its mistakes and shortcomings before the voters, from whom it needs a fresh endorsement. It is obviously an advantage for the AK Party that the opposition cannot position itself as a viable alternative for addressing problems. Yet the opposition’s lack of focus won’t be enough to win.

The AK Party needs to build on its success in foreign policy and national security to develop more inclusive policies on the home front and to keep reinventing itself. It must be determined to communicate its intention to update itself to the Kurds, center-right voters, disillusioned conservatives and young people. At the same time, the movement needs to develop micro policies to tackle the cost of living and income inequality.

House Inflation and Scapegoated Immigrants in Turkey
Next
Loading...
Loading...
We use cookies to ensure that we give you the best experience on our website. If you continue to use this site we will assume that you are happy with it.Ok