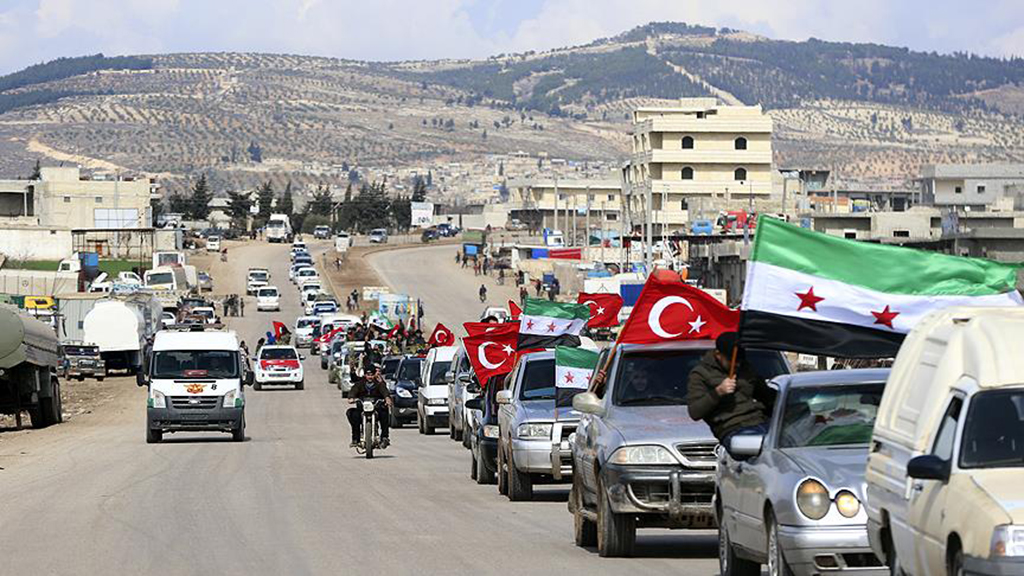 Syrian civil war 3.0 on the cards?

As the major powers reconsider their plans in Syria, the fight between proxies on the ground is getting more intense

Every passing day, it is becoming clearer that Operation Olive Branch is a game-changer in Syria. Currently in its sixth week, the operation’s success has forced various proxies, including the People’s Protection Units (YPG) and Shiite militias, to look for new options.

It will take some time to assess the operation’s impact on the calculations of the United States, Russia and Iran. Right now, U.S. officials are trying to admit that YPG militants can’t possibly accomplish the goal of containing Iran and Washington needs Turkish support. To be clear, the Russians are a few steps ahead of everybody else. Having given the green light to Turkey’s military operation to counter-balance the Iranians and mounting pressure on the U.S. forces in Manbij, Moscow is watching the whole episode from the sidelines with a grin. At the same time, Russia continues to kill civilians in Eastern Ghouta to control the area and it is monitoring the establishment of de-escalation zones in Idlib. Slowly but surely, it is waiting for the YPG to make a deal with Damascus.

Until now, the Iranians haven’t seen anything in the frontlines that could seriously contain their influence. The threats of neither Israel nor the U.S. have convinced Tehran to take a step back. Nor does Iran feel the need to hold negotiations with Turkey on the PKK/YPG. Ankara, in turn, seeks to lay siege on the Afrin town center and unite opposition groups in Idlib on the back of its successful military operation. As the major powers reconsider their plans, the fight between proxies on the ground is getting more intense. Needless to say, the YPG finds itself in the most difficult position.

Having come to terms with the fact that it cannot hold onto the Afrin town center, the YPG militants have been pleading to the Assad regime and its allies for help. Although the negotiations are still underway, the Iranian and Hezbollah-controlled Liwa al-Baqir forces have recently been deployed to Afrin. Right now, Tehran is trying to prevent the Free Syrian Army from taking Tal Rifaat to lay siege on the Nubl and al-Zahraa areas. Although the Turks are convinced with the term “uncontrolled group,” it would appear that the Iranians are unwilling to make a huge commitment to Afrin. As a matter of fact, Turkey already showed that it meant business by striking the militias twice. For the time being, the Assad regime’s failure to become directly involved in Afrin could be considered a sign of its unwillingness to engage in a direct conflict with Turkey and the necessity of holding – albeit indirect – negotiations.

The deployment of pro-Assad militias to Afrin is unlikely to drag Turkey into a hot conflict with either Iran or the Assad regime. At least for the time being, the conflict is characterized by clashes between major powers and proxies: Turkey could target the YPG or the Shiite militias, but a fight among major powers is unlikely. Iran and Turkey won’t possibly confront each other directly. Although there is some movement on the ground, the balance of power in Syria hasn’t changed radically. Such a development would require more clarity about Washington’s Syria policy and local partnerships.

Meanwhile, the Americans must either make a significant impact on the situation or let Russia, Turkey and Iran call the shots in Syria. The fact that U.S. officials are still reciting talking points about focusing on the fight against Daesh at a time when Turkey directly targets YPG militants in Afrin shows that Washington hasn’t yet grasped the nature of this new game.

At this point, despite the Geneva and Astana processes, we are unfortunately still far from accomplishing peace. The involvement of proxies alongside major powers, including the United States, Russia, Iran, Turkey and Israel, could be considered a new stage in the Syrian civil war. This is what experts like to call Syrian war 2.0. Let us hope that the peace and political transition processes can be launched before we end up with Syrian civil war 3.0 on our hands, whereby the major powers would be involved in hot conflict that could lead to a regional war.

Would the EU dare to lose Turkey's partnership?
Previous

UNSC resolution will not end Eastern Ghouta disaster
Next
Loading...
Loading...
We use cookies to ensure that we give you the best experience on our website. If you continue to use this site we will assume that you are happy with it.Ok