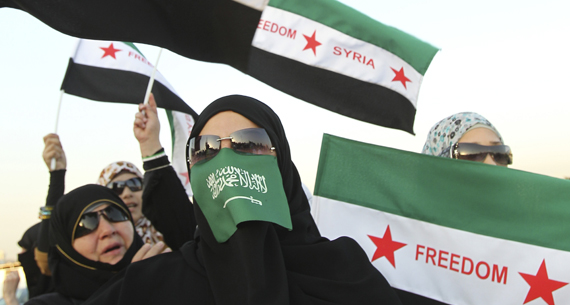 As so many outside powers have clashing geopolitical, security, and economic interests, what does the road ahead look like for Syria?

The twin vetoes by Russia and China on the UNSC draft resolution on Syria, described as having “no tooth,” have analysts pondering what the next stage of the conflict might be. As Russia weighs in on the Assad government’s crackdown on the opposition, hopes for a swift resolution of the stalemate seem to fade. The Assad regime’s most recent attack on Homs resulting in hundreds of civilian casualties suggests that we might be headed for a civil war scenario. Though the US and Turkey have taken clear positions on the Assad regime, it remains uncertain what kind of tools they may be able to employ to help the Syrian opposition succeed. Syria is quickly turning into a sectarian battleground between Iran and Saudi Arabia as well. As so many outside powers have clashing geopolitical, security, and economic interests, what does the road ahead look like for Syria?

This Policy Debate is based on a panel discussion on “Syria: What’s Next?” organized by the SETA Foundation at Washington D.C. on February 15, 2011. The panelists included Steven Heydeman of the United States Institute of Peace, Randa Slim of New America Foundation and Middle East Institute, Aram Nerguizian of Center for Strategic and International Studies (CSIS), and Erol Cebeci of SETA D.C. The discussion was moderated by Kadir Ustun of SETA D.C.

The Feb 28 Coup and Our Native' Colonizers
Previous
The Camp David Order and the United States
Next
Loading...
Loading...
We use cookies to ensure that we give you the best experience on our website. If you continue to use this site we will assume that you are happy with it.Ok