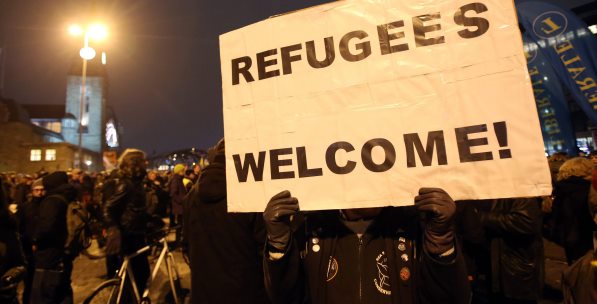 PEGIDA and the Rise of Fascism in Germany

While PEGIDA marches continue, thousands of people have repeatedly gathered for counter-rallies to protest PEGIDA.

The protests held every Monday in the German city of Dresden, a hotbed of far-right activities and a neo-Nazi stronghold, with xenophobic and Islamophobic discourses, have drawn growing numbers of people. We are faced with a new movement that manifests itself through rallies with anti-Islam banners and chants in this city, which has seen anti-Islam sentiment on the rise in recent years. Growing participation in rallies held by the Patriotic Europeans Against the Islamization of the Occident (PEGIDA), confronts us with a new phenomenon that should be analyzed by social scientists. PEGIDA’s rallies in the square in front of the Semperoper opera house in Dresden drew 500 people on Oct. 27, 1,000 people on Nov. 3, 1,700 people on Nov. 10, 3,000 people on Nov. 17, 5,500 on Nov. 24, 7,500 on Dec. 1, 10,000 on Dec. 8, 15,000 on Dec. 15 and 17,500 people on Dec. 22. Some of the banners carried by marchers had slogans such as: “We miss our country” and “Stop immigrants abusing our social welfare system.” It is seen that PEGIDA’s anti-Islamic and anti-immigration stance has spread across the nation. As rallies attract growing numbers of people, politicians as well as more than 5 million immigrants living in the country are becoming anxious.

PEGIDA is an anti-Islam movement that started with 300 people in Dresden, where immigrants account for just 2.5 percent of the population and Muslims numbering only 0.1 percent. In other words, the statistically insignificant number of Muslim immigrants in the city pales in comparison to those in other German cities. The movement asserts that it is “not against Islam, but against the Islamization of Europe,” “not against immigrants coming from war-torn countries, but against economic migrants.” PEGIDA picks out patriotic European Muslims and Islam as scapegoats for various political and social problems and legitimizes the rising xenophobia and discrimination against refugees.

PEGIDA is made up of a broad mix of far-right radicals, hooligans and desperate and excluded citizens. The 41-year-old leader of PEGIDA, Lutz Bachmann, has a criminal record for burglary, assault and a conviction for drug possession. Bachmann insists that he cannot be deemed a “racist,” saying one of the witnesses at his wedding was Turkish. He says that they fight for the fatherland, which has been under the rule of Germans for centuries and that people take to the streets for this purpose.

There are also claims that Bachmann has worked for the German secret service. Bachmann plans to expand PEGIDA, which started in Dresden, to 14 more centers. In many German cities similar movements have begun with names formed by combining the first two letters of the city with the rest of the acronym – Legida in Leipzig, Bogida in Bonn and Dügida in Düsseldorf. It is feared that similar rallies may emerge in different European countries as well. PEGIDA members say that they are against preachers of hate and religious or political radicalism regardless of religious affiliation and that is why they march against parallel societies formed by immigrant communities that do not integrate with local communities by keeping their cultural norms. They see it as part of their right to maintain and protect Western Judeo-Christian culture.

Although PEGIDA is a movement that embodies the rising xenophobia and neo-Nazism in Germany, it neither sees itself as neo-Nazi nor uses neo-Nazi symbols or discourses. Differently from neo-Nazis, they capitalize on a victimization narrative and accuse Muslims of taking away their culture and their jobs. They are against “radical Islamists,” and demand a toughening of asylum and immigration laws. While they say they are not against Muslims but radical Islamists, they complain about the rights granted to refugees and asylum seekers. They demand the suspension of immigration into Germany and Europe. It can be said that PEGIDA has some aspects that may be associated with fascism, but it is too early to say with any certainty that it is moving in that direction. We can regard