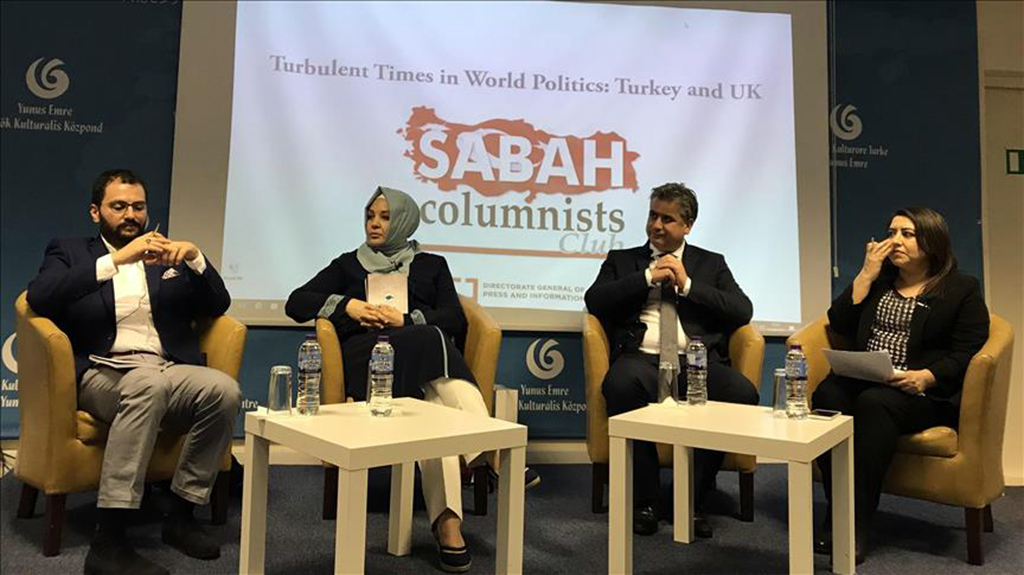 The joint fight against terrorism by Turkey and the UK is one of the main cooperation points between the two countries, a panel held in London heard Tuesday.

The panel, titled “Turbulent Times in World Politics: Turkey and UK”, was held at the Yunus Emre Institute and organized by the Sabah Columnists Club.

It was attended by Turkish and British journalists, and speakers focused on relations between the two countries.

Kaplan underlined Turkey-UK cooperation in the fight against terrorism as two former empires and pointed out that the UK was the first Western country to have supported Turkey following the July 15, 2016 defeated coup. She reminded those present that British Minister of State for Europe and the Americas Alan Duncan and later Prime Minister Theresa May visited Turkey following the atrocities committed by the Fetullah Terrorist Organization (FETO).

Caglar criticized some British press as they reported that the failed coup attempt was carried out by an anti-Islamist and “secular” movement.

He said the British press failed to report the facts at a time when Turkey was targeted by the Daesh and PKK terrorist organizations.

Caglar said despite five attacks by Daesh in Turkey, some British press reported that Turkey was supporting Daesh and that the same papers said “Turkey was killing its own citizens” during a time that PKK attacks targeted Turkey.

Yalcın said Turkey was left alone by its Western allies in its stance to support public movements when the Arab spring started, but Turkey then became an independent actor.

He said on Turkey’s EU membership prospects that the rivalry witnessed even within the union after the U.S. withdrawal from the world stage as a dominant power would make Turkey-EU relations more problematic.

The Sabah Columnist Club, supported by the Turkish Prime Ministry’s Directorate of Press and Information, was formed following the July 15 coup attempt to explain Turkish affairs to the world.

Early elections will help reduce Turkey's political uncertainties
Next
Loading...
Loading...
We use cookies to ensure that we give you the best experience on our website. If you continue to use this site we will assume that you are happy with it.Ok