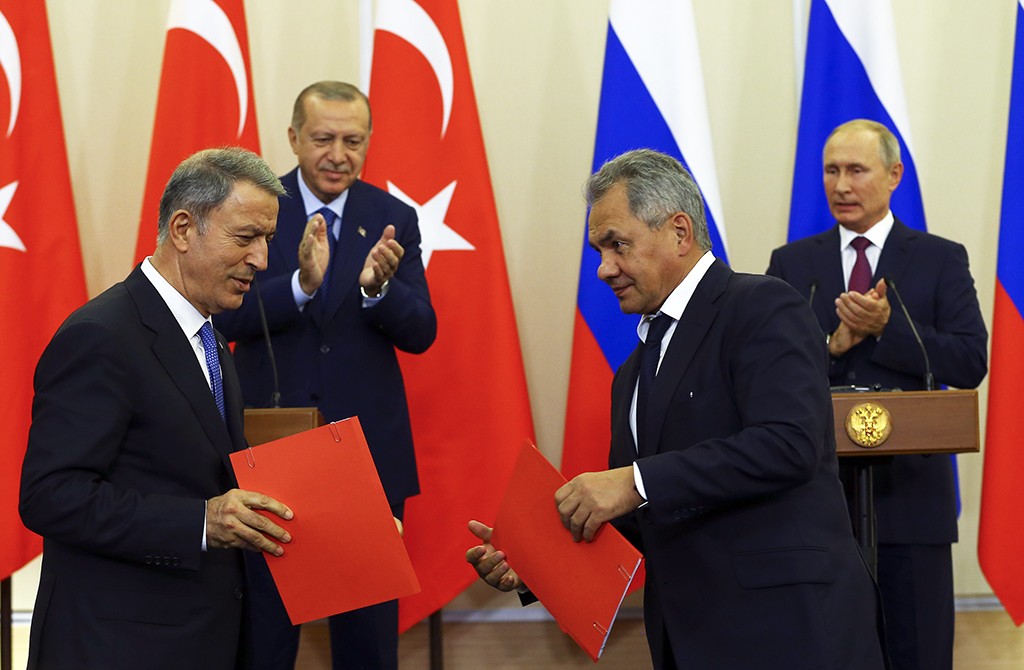 President Recep Tayyip Erdoğan held talks with Russian President Vladimir Putin in Sochi on Monday. The leaders reached an agreement in line with the spirit of the Astana process to resolve the crisis in Idlib. The new road map addresses Moscow’s security concerns regarding its military bases in Syria as well as Turkey’s various concerns. The imminent military offensive on the area has been stopped in its tracks and violent clashes between the Syrian opposition and the Bashar Assad regime have been avoided. Under the agreement, the Russians will ensure that Assad’s forces will refrain from targeting the de-escalation zone. At the same time, the opposition will be stripped of heavy weapons, as Turkish and Russian troops jointly patrol the demilitarized zone, which will be created by Oct. 15. Furthermore, it is important to note that Erdoğan reiterated Turkey’s commitment to fighting the terrorist organization PKK’s Syrian branch, the People’s Protection Units (YPG), by making references to “other terrorist groups in Syria” at a joint press conference with Putin. He also stressed the importance of the political process and the creation of a constitutional committee.

The Sochi agreement takes Turkey’s cooperation with Russia in Syria to the next level. In addition to empowering the Astana process, the two countries successfully overcame challenges posed by Iran and the Assad regime. Just 10 days after the Tehran summit, Erdoğan and Putin talked shop without Iranian President Hassan Rouhani. Let us recall that the Tehran summit produced an ambiguous deal that left the international community concerned about the situation in Idlib. As a matter of fact, the United States was quick to argue that the Tehran summit was a failure. During this period, Turkey sent reinforcements to its observation posts in Idlib and laid the groundwork for a buffer zone intended to stop the next wave of immigration and support the moderate opposition. Those steps made it clear that Turkey was not going to watch the regime’s Idlib offensive from the sidelines.

Erdoğan reiterated his commitment to a strong Turkish presence in Idlib as follows: “We have been invited by the Syrian people. Right now, people in Idlib aren’t waving Russian flags, U.S. flags or German and French flags. They are waving Turkish flags.” Simultaneously, Ankara concentrated on diplomatic talks with Moscow to prevent bloodshed in the area. The two countries talked about taking joint measures against terrorist groups, including Hay’at Tahrir al-Sham (HTS). The Sochi agreement was the product of Turkey’s determination – which enabled Ankara to maintain the momentum of its relations with Russia and to uphold the Astana process.

Furthermore, the leader-to-leader diplomacy between Erdoğan and Putin represents a strong response to various challenges related to the Syrian civil war. From the jet fighter crisis to the evacuation of Aleppo and finally the situation in Idlib, this mechanism has proven extremely effective. Although the Astana process involves three countries, Erdoğan was able to break deadlocks and address pressing problems through dialogue with the Russian president. Despite their differences of opinion concerning Syria, Turkey and Russia engaged in difficult but ultimately productive talks at key moments. After all, both countries understand that they need each other. Russia has been the most powerful military force in Syria since 2015. Turkey, in turn, remains key in the political process. The Sochi agreement left both countries in a position to cooperate more closely to resolve the Syrian crisis. At the same time, they prevented the United States from fueling tensions between Ankara and Moscow.

The Sochi agreement represents a major diplomatic victory for Erdoğan. For the first time, Turkish and Russian forces will participate in coordinated patrols to remove terrorists from Idlib. Moreover, Monday’s meeting in Sochi opened a new window of opportunity for Turkish diplomacy. The deal will strengthen Turkey’s hand regarding the launch of a political process in Syria, a process that has involved Ankara trying to start dialogue with Germany, Russia and France on the issue. Starting with his upcoming trip to Germany on Sept. 28-29, Erdoğan will enjoy greater influence in diplomatic negotiations in the wake of the most recent developments.

Analysis: The Crisis and the future of NATO | The increasing Autonomy of Turkey
Previous

Idlib agreement: A strategic threshold
Next
Loading...
Loading...
We use cookies to ensure that we give you the best experience on our website. If you continue to use this site we will assume that you are happy with it.Ok