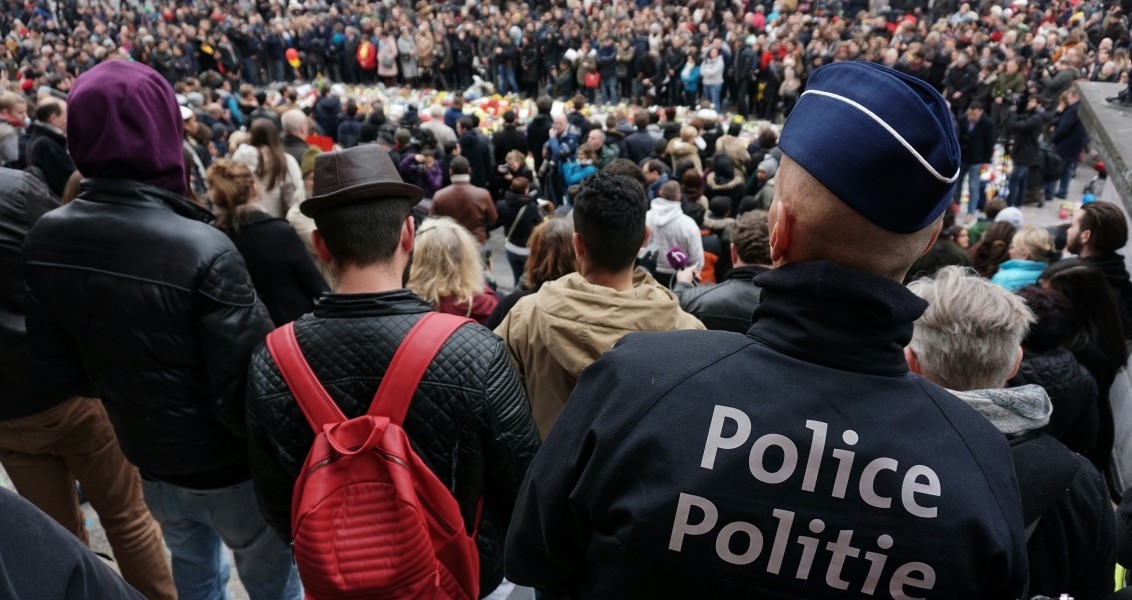 People gather to pay tribute to the victims of the Brussels attacks on the Place de la Bourse (Beursplein) in central Brussels, on March 24, 2016, two days after a triple bomb attack, which responsibility was claimed by the Islamic State group, hit Brussels' airport and the Maelbeek - Maalbeek subway station, killing 31 people and wounding 300 others. A grieving Belgium hunted two fugitive suspects after bombings that struck at the very heart of Europe, as security authorities faced mounting criticism over the country's worst-ever attacks. / AFP / PATRIK STOLLARZ

The coordinated bomb attacks at the heart of Brussels, the epicenter of the European integration project, once again shocked the international public and produced a substantial human cost. As ever, there were ultra-nationalist calls accusing migrants, Muslims and all those who are portrayed as others on the continent as potential perpetrators and supporters of international terrorism. Attack after attack, terrorist violence galvanizes a vicious circle whereby the European public opinion and political stage is dominated by hardline xenophobic and ultra-nationalist views discriminating against portions of their own society and migrants leading these groups to feel increasingly alienated and ostracized; provide fertile ground for the dissemination of radical and terrorist movements among the uneducated, disenchanted youth and stimulating ever more attacks. The root causes of widespread terrorist violence, first and foremost, should be sought within Europe’s own inconsistencies, double standards, discriminatory attitudes and reluctance for social integration.

On Wednesday, I had the chance to moderate a panel at the Istanbul headquarters of the Foundation for Political Economic and Social Research (SETA) titled “Breaches of Fundamental Rights toward Minorities and Migrants in Europe.” Experts specializing on Germany, France, the Netherlands and Sweden presented their reports comprising breaches in 2014 and 2015, and the overall picture was quite bleak as far as the rights and integration prospects of minorities and migrants in Europe were concerned. In all the cases studied, except Sweden, serious breaches of fundamental rights were reported for political participation, social organization, discrimination in high-level public and private posts and structural discrimination in education and employment policies. Unfortunately, the empowerment of ultra-nationalist movements across Europe creates an environment suited to the galvanization and exacerbation of these discriminatory dynamics that could further alienate minorities and migrants. In the same vein, the findings of the extensive SETA “European Islamophobia Report 2015” indicated that there is a dangerous tendency across Europe through which xenophobia, prejudice and even animosity against Muslims is spreading across Europe, including in countries in which there is not a substantial Muslim population. The stereotypical image of the Muslim terrorist that has been cultivated, disseminated and normalized by Hollywood, conventional Western media outlets and intellectuals seems to have sadly traveled from countries devastated by Western military interventions such as Afghanistan, Iraq and Syria to the heartland of Europe.

As we stand, it is normal that public authorities across Europe will try to tighten public security, intensify intelligence gathering and sharing on terrorist groups, control social mobility across borders and pursue various securitization measures. But it would be naive to expect that these measures will be enough to curb the spread of terrorism and extremism, which has deep-rooted socio-economic and political underpinnings. A long-term solution requires the locomotives of the European project, Germany and France, to come up with a macro-strategy to alleviate the rights breaches of minorities and migrants for better integration and to eliminate the fertile ground that provides hundreds of unemployed, uneducated, disillusioned youth to the service of radical terrorist organizations.

Then, European double standards that discriminate between terrorist organizations and provide safe homes to some as long as they do not conduct violent activities in Europe should change immediately. In the world of globalized terrorism, it is not any more safe to assume that a specific terrorist organization provided shelter and protection by certain European countries will be involved in intensive terrorist activities in the Middle East, but somehow stay away from the terrorist networks that operate in Europe. Ankara has been warning its European allies for years to prevent the activities of terrorist organizations such as the PKK and Revolutionary People’s Liberation Party Front (DHKP-C), to no avail, and it was saying that one of the perpetrators of the Brussels attacks was deported by Turkish authorities who cautioned Belgium and the Netherlands about his deadly intentions. Effective counterterrorism policies require sincerity, consistence and unreserved international cooperation.

If We Do Not Want More Bombs to Go Off
Previous