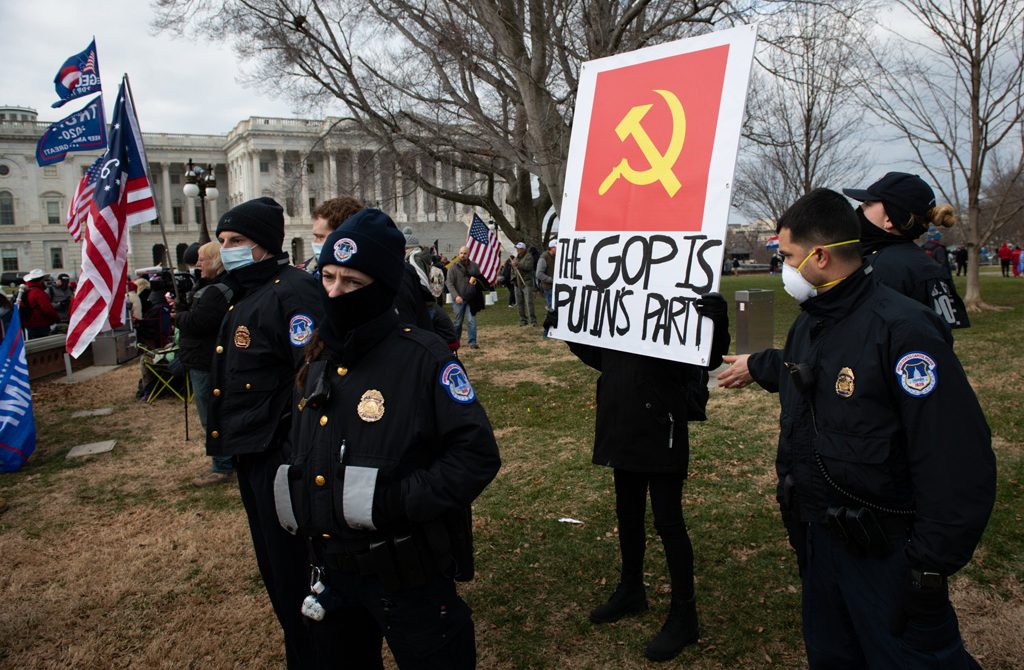 U.S. Capitol police officers surround a demonstrator holding a sign reading "The GOP Is Putin's Party" during a protest outside of the U.S. Capitol, Washington, D.C., U.S., Jan. 6, 2021. (Photo by Getty Images)

A power struggle in the US-Russia-China triangle

The new United States administration made waves with its “value-based” statements. In his first exclusive interview last week, U.S. President Joe Biden called Russia’s President Vladimir Putin a “killer” and vowed to make him “pay a price” for meddling in the U.S. elections.

The new United States administration made waves with its “value-based” statements. In his first exclusive interview last week, U.S. President Joe Biden called Russia’s President Vladimir Putin a “killer” and vowed to make him “pay a price” for meddling in the U.S. elections.

It is no secret that the White House despises Moscow for interfering in the 2020 election to sway the vote in favor of former U.S. President Donald Trump. Biden added that Putin had “no soul” – which was probably in reference to the Russians killing dissidents or paying the Taliban to kill U.S. troops in Afghanistan.

A similar “value-based” statement was made during U.S. Secretary of State Antony Blinken’s meeting with his Chinese counterpart in Alaska. There, Washington’s top diplomat told reporters that China’s actions in Xinjiang, Hong Kong and Taiwan; the cyberattacks targeting the U.S. and the economic pressure on American allies, would be on the table.

Blinken, who had just visited Japan and South Korea, accused Beijing of “threating the rules-based order” – which demonstrated the new increased degree of tension between the two countries.

The Biden administration had been calling for a reset in bilateral relations, after which the relationship could be competitive, cooperative or hostile as the situation necessitates.

In a way, the Chinese reminded everyone that the U.N. system serves the interests of the great powers. They also urged Washington to rid themselves of the Cold War mentality and its zero-sum-game approach.

It was hardly surprising for China and Russia to bring up the treatment of African Americans in telling U.S. officials to essentially “mind their own business.”

To be clear, the Biden administration is not unsettled by such reactions. Admitting to the shortcomings of American democracy under Trump, after all, serves the cause of domestic consolidation.

Meanwhile, in the international arena, the United States pursues a new synthesis between “values” and “great power competition.” Washington’s simultaneous and strong criticism toward Russia and China escalates tensions but reflects a deliberate choice.

The United States subscribes to a policy of pressure and escalation, ostensibly because it believes the basis of cooperation between the great powers on COVID-19 and climate change to be fragile. As such, it deliberately preaches “democracy and human rights” discourse to win over allies.

The Biden administration wants to oversee the emergence of “value-based blocs” – turning its trans-Atlantic alliance against Russia and its Asia-Pacific allies against China. As a matter of fact, Washington’s European allies, too, will be positioned against China on the basis of “values.”

Likewise, Russia’s Nord Stream 2 project and political-military pressure on Eastern Europe will be delegitimized based on a distinction between democratic and authoritarian regimes.

The same rhetoric will apply to China’s global trade empire and 5G technology. Putin and the Chinese Communist Party (CPC) will be the specific targets of the campaign.

More and more people in Washington seem to agree that the great power competition between the United States and China cannot be won based on a conflict of interest alone. They say that the fight is also fueled by values and morality.

A recent article by Hal Brands and Zack Cooper, featured in Foreign Affairs on March 16, immediately comes to mind. The problem with the approach in question is that the United States needs significant engagement from its European and Asian allies to reorganize its complex network of power and interests around “democratic values.”

It is quite possible that those countries do not take the “Russian and Chinese threat” seriously enough to be willing to put their own national interests on the backburner for the sake of American interests.

As such, Washington needs to find a common ground in the real world of interests that will at the very least satisfy the major players.

Furthermore, I do not believe the United States has the capacity needed for dual containment – even if it utilizes values. It must pick Russia or China – or fail on both counts.

Pendulum swinging between tensions and softening in Turkey-Egypt relations
Previous

How to break the deadlock in Turkey-EU relations
Next
Loading...
Loading...
We use cookies to ensure that we give you the best experience on our website. If you continue to use this site we will assume that you are happy with it.Ok