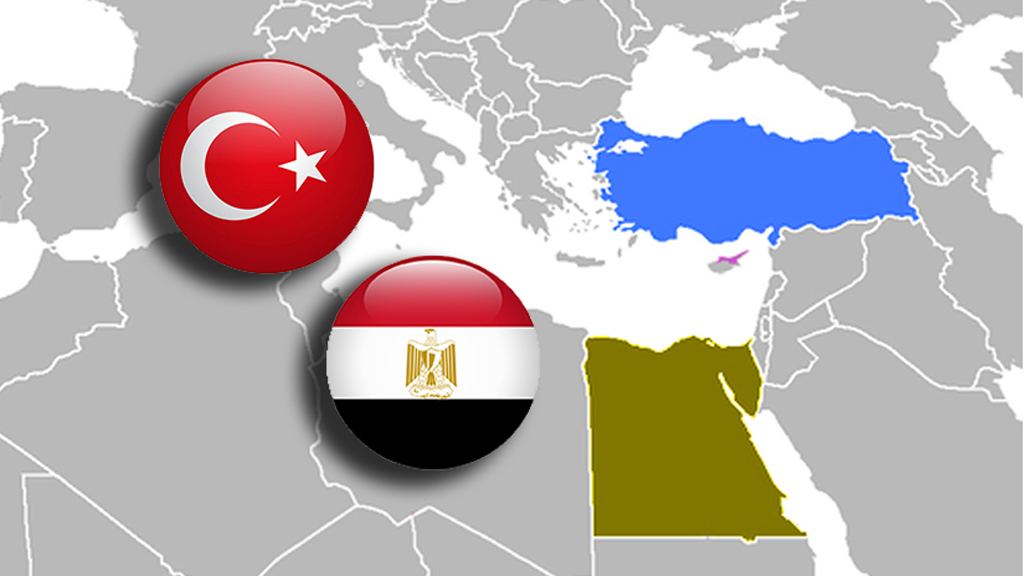 Pendulum swinging between tensions and softening in Turkey-Egypt relations

In order for normalization initiatives to bear fruit, ambassadors must be appointed or an agreement on maritime jurisdiction areas must be signed, which are, in fact, options that are not too far-fetched

The relationship between Turkey and Egypt over the last century cannot be discussed without taking into account the global context or regional changes. In other words, bilateral relations are not solely formed by the preferences of the two countries’ decision-makers and cannot be treated in this context alone. This becomes even clearer when we remember that during the Cold War, world politics split into two camps, with each nation toeing the line of the camp it belonged to. The historical trajectory of Turkey-Egypt relations can also be better understood from this perspective.

Although they do not pose a direct threat to each other and do not share a land border, the relationship between Turkey and Egypt — the two countries that have played significant roles in shaping the Middle East — has traditionally been volatile. One would, however, expect to see stable relations between the two countries since there are no active or potential threats that could pose a direct problem to either side. This has not been the case, however. The two countries have gone through rough patches in their relationship, at times strained to the point that both recalled their ambassadors. To make sense of the dynamics of their relationship, any analysis should focus on their positions in terms of global power distribution and put them in a historical context.

The historical course of Turkey-Egypt relations

The most important factor that has affected Egypt and Turkey’s bilateral relations as two independent states is the distribution of power that took place during the Cold War era. Turkey and Egypt’s regional policies and bilateral relations are also inevitably linked to this situation. Since the early 1950s, the rivalry between the United States and the Soviet Union has influenced positioning patterns and bilateral ties in the Middle East. In this sense, the most important indicator in terms of Turkey-Egypt relations is the fact that, after assuming power, Gamal Abdel Nasser established close ties with the USSR, while Turkey joined NATO, which reflected on their relationship negatively.

The formation of the Baghdad Pact in 1955 resulted in a collision between these two visions. Nasser, who overthrew the monarchy with a military coup in 1952 and moved Egypt from the British to the Soviet axis, began to make a bid for the leadership of the Arab world by riding the wave of Arab nationalism. Turkey, on the other hand, was trying to maintain its security through collaborations integrated with Western policies. The Baghdad Pact established under British leadership was one of these collaborations. In addition to this, the US stipulated that Nasser’s appeal for assistance and cooperation could only be met if Egypt joined the Baghdad Pact. Taking into account also the British influence on the pact, Nasser gave a harsh reaction because he interpreted the Baghdad Pact as an attempt to contain Egypt in the Arab world. The tensions that arose between the two countries over this issue culminated in the withdrawal of ambassadors. However, Turkey’s attitude in the Suez crisis, which was aligned with that of the US and could be viewed as calm and pro-Egypt, aided in the restoration of relations.

Israel, on the other hand, has been one of the most important points of agreement between the two countries’ foreign policies. Despite its recognition of Israel immediately after its establishment, Turkey pursued a policy similar in many ways to that of the Arab world during the Cold War, first and foremost with regard to Jerusalem, which was one of the most significant points of commonality between the two countries.

In the post-Cold War period, no remarkable change occurred in bilateral ties, for better or worse. During the 1998 crisis Turkey had with Syria because of the terrorist PKK, Egypt’s President Hosni Mubarak acted as a mediator and contributed to the resolution of the crisis.

Arab revolts and resumption of tension

During the Arab uprisings, changing global and regional dynamics prompted many countries to revise their foreign policies. During this time, in Egypt, where riots broke out, Hosni Mubarak was deposed, and Mohammed Morsi was elected president in the first democratic elections held after a one-and-a-half-year transition period. During the year that Morsi was in office, relations improved dramatically. The quadruple mechanism established by Turkey, Egypt, Saudi Arabia, and Iran for the resolution of the Syrian crisis, as well as the efforts to delimit maritime jurisdiction areas provided valuable insights into regional policies and bilateral relations. However, Turkey’s reaction to the military coup in Egypt against the Morsi government on July 3, 2013, resulted in a rapid deterioration of bilateral relations. While the ambassadors who had been mutually recalled were about to return to service, Egypt’s declaration of the Turkish ambassador as “persona non grata” lowered the level of diplomatic ties once again.

With this step taken without considering the cyclical conditions and the broad chasms between regional visions, Egypt merely paved the way for more strained relations with Turkey. At this point, we may wonder whether the governments of the two countries might have avoided this strain in relation to more prudent process management. However, we may argue that global and regional dynamics, as well as opportunity/cost calculations, are the primary factors that influence the actors. By “cyclical conditions”, I mean the Gezi protests in Turkey, which took place at the same time as the July 3 coup in Egypt. These converging events marked the beginning of a new wave of the democratization process that Turkey engaged in at home and supported across the region. From this vantage point, Turkey’s response to the coup in Egypt makes sense.

Since 2013, there have been disagreements between the two countries in three particular areas: The first is bilateral relations. The Egyptian government has accused Turkey of interfering in its internal affairs. The charges are based on Turkey’s response in the context of cyclical conditions, as well as government officials from the Morsi era fleeing Egypt to live in Turkey. Particularly, some individuals affiliated with the Muslim Brotherhood also currently living in Turkey have stirred accusations from the Egyptian government. Although members of the Muslim Brotherhood went to many European countries, especially the UK, the Egyptian government has not made similar allegations against these countries. Moreover, the US has made many statements that could be construed as “interfering in Egypt’s internal affairs.” More importantly, while Turkey has permitted such people to reside in the country, they are not allowed to get organized or engage in any illegal activities against Egypt. As a result, while this appears to be the root of Egypt’s allegations against Turkey, the main source of their disagreements is a schism in their regional visions and approaches to the Eastern Mediterranean and Libya.

The second point of contention between the two countries has been Libya. Since 2014, Egypt has been a staunch supporter of the Haftar-led group, which has attempted to seize power by using force against the internationally recognized legitimate administration. However, when the Libyan crisis converged with the energy competition in the Eastern Mediterranean and the usurpation of Turkey’s rights, Turkey had no choice but to act. Turkey’s delimitation agreement with the Libyan government on maritime jurisdiction areas at the end of 2019 and a number of other agreements on military and security cooperation resulted in an indirect confrontation between Turkey and Egypt.

In a statement last week, Turkish Foreign Minister Mevlut Cavusoglu said that, given the state of ties in the Eastern Mediterranean, Turkey and Egypt might sign a delimitation agreement on maritime jurisdiction areas. In a subsequent statement, he declared that diplomatic contacts had been initiated. These declarations, which came a week apart, suggest that relations between Turkey and Egypt are beginning to thaw. It is, on the other hand, impossible to deny the impact of global and regional developments on the normalization of ties.

The ongoing uncertainty on a global scale about what kind of role the US will play in the world and its Middle East politics has mobilized many countries. Expectations that the “withdrawal” strategy of the US, which started during the Obama period, could continue in this period, despite Biden’s slogan “The US is returning,” prompted many actors to restructure their regional and bilateral relations. In this context, Avoiding the costs of potential US-caused crises and taking steps to that end has become the rational policy for many players. On a regional basis, Egypt’s realization that siding with the bloc against Turkey on the issues of Libya and the Eastern Mediterranean does not offer any gains has called for a policy change. Egypt and Turkey’s positive contributions as part of the normalization trend in Libya were the first signs of a possible thaw in bilateral ties. The fact that long-running talks between intelligence agencies have yielded results, leading to diplomatic talks, is a direct result of this situation.

The quest for normalization between the two countries, which began with backdoor diplomacy, has led to an optimistic atmosphere. Indeed, the fact that Egypt and Turkey are sitting at the table without preconditions has boosted hopes that the talks would deliver results. However, in order for normalization initiatives to bear fruit, ambassadors must be appointed or an agreement on maritime jurisdiction areas must be signed, which are, in fact, options that are not that far-fetched. However, given the low level of diplomatic relations over the last eight years and the two countries being in separate camps in regional policies, the normalization process may take longer than anticipated. Furthermore, even if normalization does take place, what may happen at best is a level of “fragmental relations,” a usual trend in world politics for some time. In other words, the possibility of further disagreements arising over various issues should not be overlooked. What matters now is both countries’ ability to handle any issues that could emerge as a result of the softening.

Can the Biden team recalibrate the Middle East?
Previous

A power struggle in the US-Russia-China triangle
Next
Loading...
Loading...
We use cookies to ensure that we give you the best experience on our website. If you continue to use this site we will assume that you are happy with it.Ok