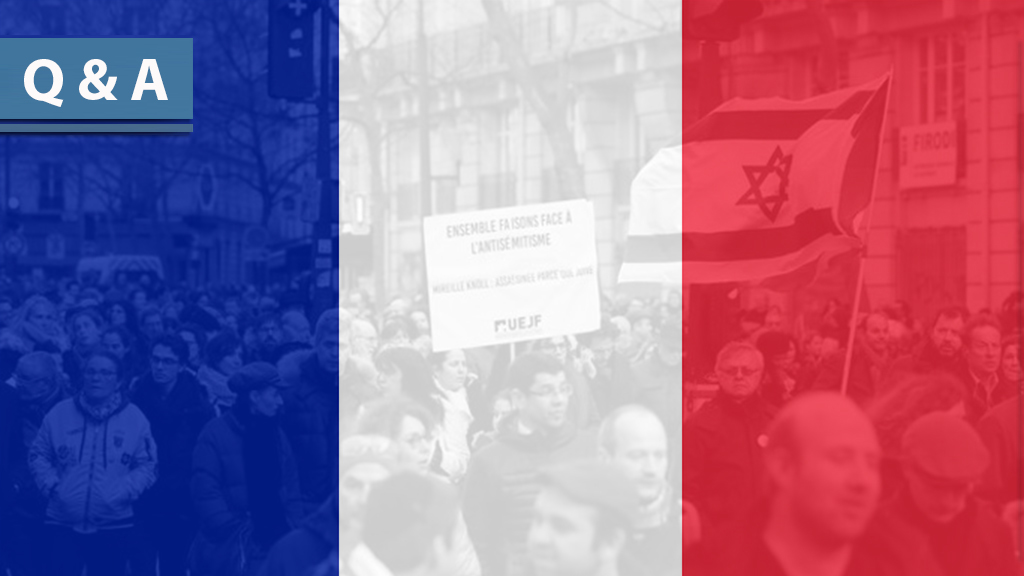 5 Questions: The French Manifesto against the “New Anti-Semitism”

Why does this manifesto reflect the anti-Muslim rhetoric that prevails in France?

This manifesto is clearly mixing up individual anti-Semitic acts – that are sometimes carried out by Muslims/or Muslim-origin individuals – with Islam as a whole. In other words, it supposes that Islam is intrinsically a religion that encourages anti-Semitic attacks, and thus depicts French Muslims as potential threat to Jews’ security in France. Through such stereotypes, this manifesto strengthens the idea that Islam/Muslims are the “domestic enemy” of the French nation, whatever their individual differences of class, education, geography, philosophical affiliation. On the one side, there are the “French people” that live in peace and on the other, Muslims that concentrate all kinds of manifestation of violence. Muslims then constitute the “Other,” the non-assimilated one that the government should control, shape and correct. Yet, we should remember that anti-Semitism is not restricted to Muslims but widely spread among French society in general and far-right groups in particular. Without denying the reality of anti-Semitism in France (at least 11 Jews have been killed these last years), we can say that the monolithic and essentialist approach of the manifesto – deprived of any socio-political or contextual analysis – leads its author to condemn Muslims because they are Muslim, which is an Islamophobic rhetoric.

The “Call against the new anti-Semitism” (l’Appel des 300 contre le nouvel antisémitisme) was published in the very popular and centre-right Le Parisien newspaper on April 22, 2018. It is an opinion column written by Phillipe Val and signed by 300 famous intellectuals, artists and politicians. Phillipe Val is a famous writer, journalist and left-wing activist. He was Charlie Hebdo’s news editor (1992-2004) and director (2004-2009) as well as director of France Inter (2009-2014), one of the most popular radio stations in France. After having fought far-right groups and Christian extreme movements as a while, he takes a position against Muslim exterior signs (headscarf at school) at the beginning of the 2000s and regularly denounces the growing influence of Islam on French society. The publication of Prophet Muhammad’s caricatures (that represent him wearing a bomb as a turban) by Charlie Hebdo in 2006 is then perceived as a defence of French secular tradition (laïcité) against religious laws and taboos. In November 2015, he depicted journalists and intellectuals that denounce Islamophobia as “collabos” (referring to French traitors who collaborated with German Nazis during WWII).

Even if the profile of those who signed this manifesto is – of course – diverse, we find among them a lot of figures of a “hard laïcité” that emphasizes the preeminence of the majority’s values and traditions over minority rights (i.e. the Jacobian conception of assimilation): Nicolas Sarkozy (former president of the Republic, right-wing); Manuel Valls (former prime minister, left-wing); Gérard Cazeneuve (former prime minister, left-wing); Pascal Bruckner (philosopher, polemist); Alain Finkielkraut (philosopher, polemist); Pierre-André Taguieff (philosopher, polemist); Laurent Wauquiez (leader of the right-wing Republican Party); Alexandre Devecchio (journalist); Elisabeth Badinter (philosopher, feminist)… In their statements and writings, “the defence of laïcité” is often mixed with nationalist and Islamophobic comments.

Since the manifesto is a categorical charge against Islam, it naturally led to intense debates in France. In these debates one can notice three major positions: [1] Firstly, those who support the manifesto in both content and form. They are either supporters of “hard laïcité” or openly against Islam. They consider the condemnation of Islamophobia as indulgence towards Islamic radicalization. According to them, Islam is not only a source of anti-Semitism but also of disorder in liberal or/and Christian societies; [2] Secondly, those who defend the manifesto’s purpose and objectives but remain critical on some content or form. They salute the effort to fight anti-Semitism and claim that a lot of the violence against Jews comes from Muslim-origin youth. Nevertheless, they consider the call to withdraw Qur’anic verses as nonsense and some statements in the manifesto such as “a quiet ethnic cleansing,” “Jews have 25 times more risk of being physically attacked than Muslims,” and “the left wing remained tolerant towards Islamism in order to benefit from Muslim votes” as exaggerated; [3] Thirdly, those who totally condemn the manifesto as an Islamophobic column. They claim that considering the Qur’an and Islam as intrinsic sources of hate is synonymous to condemning the whole Muslim community. They also maintain that anti-Semitism is not restricted to Muslims and call attention to the fact that even if Muslim-origin individuals are committing such crimes, there is no proof that such crimes are motivated by “Islam” or religious purpose. Therefore, they highlight the multi-causality of anti-Semitism (individual, geographical, political, cultural…).

The manifesto’s call to withdraw some Qur’anic verses is based on the already mentioned Islamophobic rhetoric but also on a European-centrist reflex. On the one hand, since authors and signatories believe that Islam is the main cause of a “new” anti-Semitism then it is logical that they propose to reform Islam, and therefore the Qur’an. Although it is Islamophobic – because it participates in a racist stereotype, mixing up a few individual acts with the whole Muslim community – it remains meaningful according to their standpoint. On the other hand, such calls refer to the European-centrist reflex because they presuppose that any religion works in the same manner as the Catholic Church. Indeed, the author legitimizes withdrawing some Qur’anic verses through the example of the Second Vatican Council (1962-1965), which he considers as an official, vertical and successful reform of what he called “the Bible’s incoherencies and Catholic anti-Semitism.” However, everybody knows that Catholic Church-like hierarchy and administration does not exist in Islam… In sum, Muslims represent this ugly “Other” that we stubbornly try to shape through “our” outlook… What a contradiction!

Unfortunately, both anti-Semitism and Islamophobia constitute racist realities in France. As a result, both are worth fighting against and sharply denouncing. However, instead of constituting a global struggle against racism and hate, this manifesto attempts to fight anti-Semitism through an Islamophobic discourse. In other terms, it positions one minority against another, the Jew against the Muslim. We are far from the ideals of peace, human rights and “modernity” preached in the same column! Another way to tackle anti-Semitism would be to consider every French citizen in an equal manner, whatever their religion or origin, without tolerating any form of racism. We should therefore explore and analyze problem(s) of racism(s) in their complexities through sociological research and data, and not through ideological discourse on “nation,” “religion” and “laïcité.”

Perspective: Austria’s Shift to Authoritarian Islam Politics
Next
Loading...
Loading...
We use cookies to ensure that we give you the best experience on our website. If you continue to use this site we will assume that you are happy with it.Ok