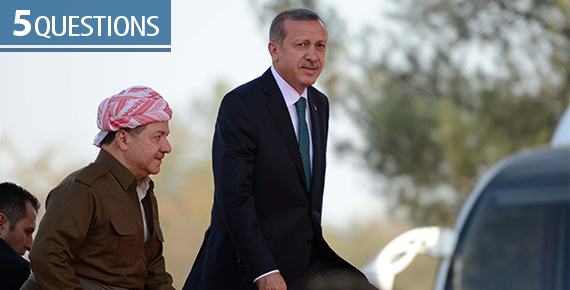 Taha Özhan: Hosting Massoud Barzani in Diyarbakır is a significant turning point which has a consistent decade-old background history, and we may regard it as an ultimate-point for the state.

1. In your last Perspektif article published in the Sabah daily, you wrote that hosting Barzani in Diyarbakır represents a significant departure point in the State’s way of thinking as far as the region is concerned. What kind of a departure are we talking about?

After a long time, the occupation of Iraq became the moment of crisis on account of which Turkey faced a direct, concrete problem with a regional dimension. In conjunction with this occupation, the following picture emerged: Although the tutelary regime in Turkey toppled the government five years before the occupation of Iraq (February 28, 1997) and seemed quite strong, it gave an image of desperation when the signs of the occupation had appeared beyond the border. Although Turkey was at the center of the occupation-related discussions, the military and the institutions in support of the regime stood aside as if they were not part of Turkey. The burden was mostly on the ruling Justice and Development Party (AK Party) albeit the party had come to power just a few months before the occupation; besides, the AK Party leader was not appointed as the Prime Minister back then. By not taking part in the occupation of Iraq, the AK Party eventually showed that they were not acting in accordance with global dynamics – even if there were different discussions and positions before the occupation. The first minor breaking point occurred then.

Subsequently, when the PKK resumed acts of terror in a manner to support the tutelary centers in advance of the 2007 Presidential Elections, the discussions about an intervention in Northern Iraq flared up. At that time, the Prime Minister strongly refused these discussions at the expense of paying a price. First, he postponed an operation to Northern Iraq in order to tackle with the PKK inside. However, one of the 20+ operations in Northern Iraq was made in 2008 because the PKK continued terror activities. Afterwards, a negative image about the Kurdistan Regional Administration (KRA) in Iraq formed as the PKK terror escalated. This was a very difficult situation to explain. The status quo somehow protected itself. The status quo regarding Iraq in Turkey protected itself. But Turkey made a serious foreign policy move. As far as foreign policy is concerned, this had already started to transform the State’s way of thinking.

The only entity that was forgotten about was the KRA. From its name to the elements of the structure in that part of Iraq, to its close interest in the Kirkuk issue, the KRA was standing aside. In fact, another breaking point occurred when the Prime Minister visited Arbil. That was followed by Turkish Foreign Minister Ahmet Davutoğlu’s visits to Arbil and Kirkuk; therefore, other breakings points occurred. But, none of them would be as effective as a Diyarbakır visit by the KRA President Barzani. It was the case indeed. Turkey showed that it had overcome all the built-in fears since the establishment of the Republic by inviting an actor such as Barzani to Turkey. This breaking point has a consistent decade-old background history and we may regard it as an ultimate-point for the state.

2. In the same piece again, you mention “This encounter has nullified social and political borders of the Sykes-Picot in a manner to go beyond the Kurdish question in Turkey.” What kind of a paradigm are we facing in the new period?

The state’s mind in Turkey was such that it discussed the Kurdish issue only in terms of the PKK; dealt with the other side of the border only to wipe it out militarily through security-centered policies; did not pay much attention to the consequences of the fact that Kurds in this region had to be divided into four countries according to the Sykes-Picot; in a way, the state’s mind only tackled with the consequences of the Kurdish issue within our borders and acted as if Kurds in other regions do no

The Adjourned Hope of a New Constitution
Previous

The Constitution Shackle and Democratization
Next
Loading...
Loading...
We use cookies to ensure that we give you the best experience on our website. If you continue to use this site we will assume that you are happy with it.Ok