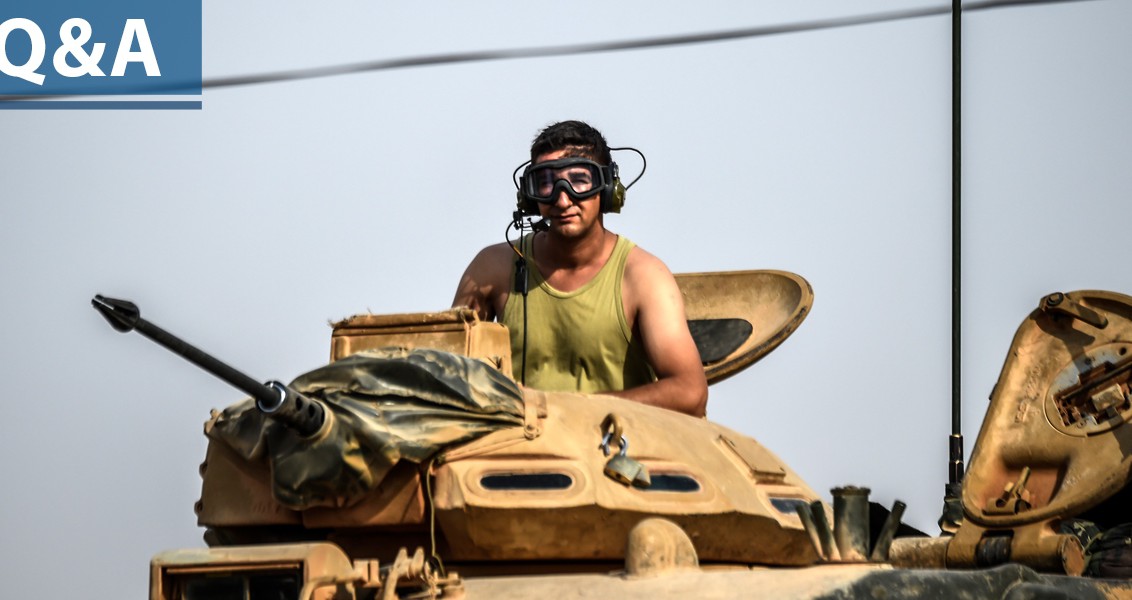 Constitutively, the Euphrates Shield operation had two phases. The first phase aimed to liberate several villages and areas in the west and south of Jarabulus in order to be able to lay siege to the city. In the second phase, an offensive attack enabled the entrance of the aforementioned forces to the city center.

1. What are the technical details of the operation?

The “Operation Euphrates Shield” is a military operation led by the Turkish Armed Forces (TAF) together with the Syrian opposition forces to eliminate DAESH from Jarabulus in the Syrian province of Aleppo. Along with the Turkish air and land forces, special TAF units and the National Intelligence Organization (MIT) are also taking part in this operation, which is partially supported by the international coalition against DAESH. Turkey trained and equipped the Syrian opposition forces of Sultan Murad Brigade, Sham Front, Faylaq al-Sham, Jaysh al-Nasr, Jaysh al-Tahrir, Hamza Division, Liwa al-Muattasim, Nureddin Zengi Brigade, 13th Division and Liwa Suqur al-Jabal for the “Operation Euphrates Shield” in advance. It is noteworthy that additionally to groups that were part of the Hawar-Kilis Operations Room, which had liberated Al-Rai from DAESH, the Nureddin Zengi Brigade, 13th Division, Jaysh al-Nasr and Faylaq al-Sham participated in the operation.

Turkey has been striving for a long time to take control from DAESH of the 90-kilometer-long Azaz-Jarabulus region with the aim of securing its border line as in the case of the zone between Azaz and al-Rai that was already liberated from DAESH. In this manner, the “Operation Euphrates Shield” is in fact the second phase of a controlled effort to secure Turkey´s border with Syria. The operation began at 4 a.m., August 24 with Turkish artillery and howitzer strikes. Following these shellings, the Turkish Air Force and the International Coalition targeted several DAESH positions and helped to create a corridor for 25 TAF tanks and Syrian opposition forces to cross the border to Syria along with TAF Special Forces and other special units of the intelligence agency. Constitutively, the “Euphrates Shield” operation had two phases. The first phase aimed to liberate several villages and areas in the west and south of Jarabulus in order to be able to lay siege to the city. In the second phase, an offensive attack enabled the entrance of the aforementioned forces to the city center. The numbers of the Syrian opposition forces involved in this operation is estimated at 2,000-3,000.

2. What is the importance of Jarabulus? Why did Turkey start this operation?

Jarabulus is very important for all actors on the ground. The city has a logistic importance due to its position on the west banks of the Euphrates. In addition to this, its border crossing with Turkey will allow the logistic support of Turkey-supported oppositional forces. This border gate was considered DAESH’s last door to the world by virtue of the presence of illegal crossing points. Possible future operations towards south-west fronts are now easier since the city is secured by the Euphrates River on its east side and Turkey in the north. To create Turkey´s long-awaited security zone, DAESH could be attacked from the Azaz-Marea-al-Rai axis and from Jarabulus simultaneously.

Jarabulus was taken by opposition forces on July 2012 and then captured by DAESH at the end of 2013. After the loss of Tal Abyad, DAESH held its last border gate at Jarabulus. Turkey arrested lots of people who tried to cross the border using  illegal border-crosssings near the border gate of Jarabulus. In 2015, the PYD tried to take control of Jarabulus, so they could unite their self-declared cantons in Northern Syria. Jarabulus is important to Turkey for avoiding further threats to its border and for preventing the fusion of the PYD cantons.

3. How will the regional dimensions be shaped after the operation?

During his visit to Ankara, Joe Biden constantly emphasized that “The people of Turkey have no greater friend than the United States of America.” This could be understood as the USA expressing its wish to continue its cooperating relationship with Turkey. In this regard the U.S. demand that the PYD/YPG withdraw their forces back to the east side of the Euphrates could be interpreted as a positive step towards Turkey´s Syria policy. Furthermore, the weak response of the Assad regime could be seen as a result of the Turkish-Iranian talks. Added to this, the normalization process with Russia leads to the same enemy setting, namely of DAESH and PYD/YPG. The policy of Turkey from the very beginning to maintain the territorial integrity of Syria made it possible to reach an agreement on this base with the other sides. The common goal to fight against DAESH, which was created by the USA, now has developed into a fight also against the PYD/YPG to save the territorial integrity of Syria.

On the other side, all developments until “Operation Euphrates Shield” on the northern countryside of Aleppo were in favor of the PYD/YPG. The SDF/PYD/YPG, which has gained the support of the US-led Internal Coalition lead, was able to make great progress against DAESH and the Syrian opposition. But with this operation, Turkey and the Turkish Air Force are now effective on the ground. This was the first time Turkish jets entered the Syrian airspace since the downing of a Russian jet. With this move Turkey also broke the aerial control of the International Coalition. As a result, this will also influence the situation on the ground in Syria. The PYD/YPG has made positive gains for its dream of a PYD corridor under the banner of the fight against DAESH, but now they have lost their role as the force fighting DAESH and given up their advantage as a result of the air support from the International Coalition. The opposition force will be able to advance against DAESH and to limit the countryside controlled by the PYD/YPG. After pushing back PYD/YPG and DAESH forces, the position of Turkey and the Syrian opposition will get stronger.

4. How is the existence of the PYD/PKK in Northern Syria a threat to Turkey?

The PYD gained dominance in the regions of Afrin, Ayn al-Arab and Jazira by creating a symbiotic relationship with the Assad regime during the Syrian revolution. Since 2003, they acted as the Syrian affiliate of the PKK. Finally, they took control of a region in the northwest and northeast of Syria with the aim of creating a corridor that went as far as Afrin. The PYD has been behind the ethnic cleansing of Turkmens and Arabs in the region in an effort to create a society dominated by its own population. The PYD also give the HPG logistic support for terrorist attacks in Turkey. The military alliance with the USA against DAESH gave them new power, as a result of which they declared the Northern Syrian Federation. In conclusion, the PYD is a threat to Turkey and to the territorial integrity of Syria.

5. What are the next steps for Turkey?

One can expect that Turkey will take steps to effectuate a safe zone after the “Operation Euphrates Shield,” which has been on its agenda for a long time. A buffer zone may be established, which covers an area between Azaz and Jarabulus of 90 km in length and 40 km in depth and which has been liberated from DAESH and PYD/PKK terrorist groups. Thus, while Turkey eliminates major threats to its national security, people who forcibly migrated from these areas, can now return to their homes safely. After “Operation Euphrates Shield,” Turkey will carry on the air support to opposition forces to enable them to progress firstly to al-Rai and then further south against DAESH. Turkey should take steps to secure its borderline as much as possible and provide the Syrian opposition forces the support to go deeper towards the southern countryside. With this change of the balance of power, Turkey can support the unification efforts of the Syrian opposition forces in Idlib and Aleppo and lead them toward becoming a powerful actor on the ground and at the negotiation tables with the regime. Turkey should also try to isolate the YPG and to win over other groups that are under the umbrella of the SDF. Finally, following this, Turkey should act together with local actors, groups and tribes to push the YPG towards the east of the Euphrates.

YPG Threat May Be Closer Than It Appears
Previous

Operation Euphrates Shield: Goals and Challenges
Next
Loading...
Loading...
We use cookies to ensure that we give you the best experience on our website. If you continue to use this site we will assume that you are happy with it.Ok