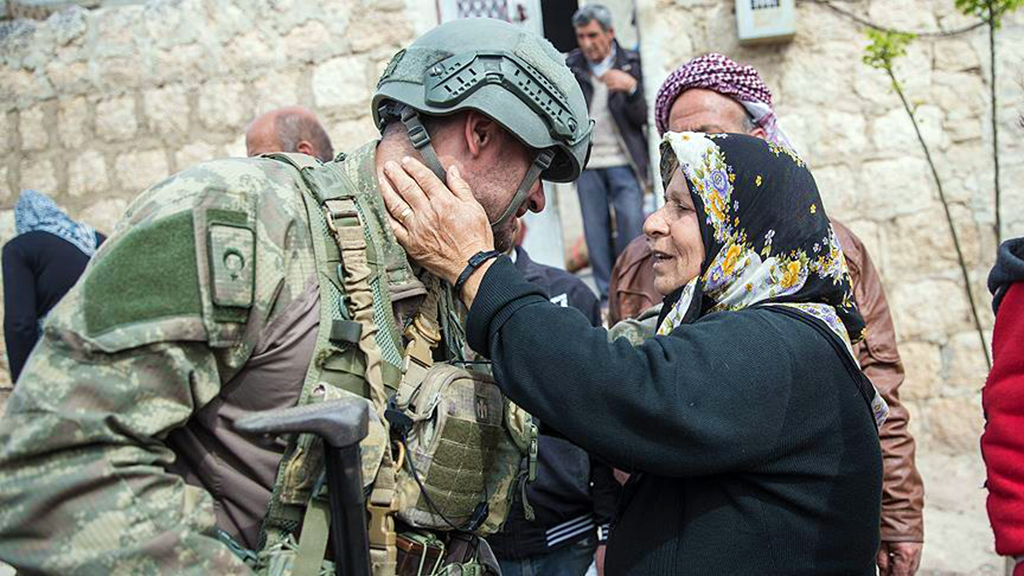 It took just 58 days for the Turkish Armed Forces (TSK) and Free Syrian Army (FSA) to liberate the Afrin city center. Repeated calls by the PKK’s Syrian affiliate People’s Protection Units (YPG) for a glorious resistance and the support of their cheerleaders in the Western media proved futile to a successfully orchestrated military operation. In the end, YPG militants fled the most strategically important part of Northwestern Syria with their tails behind the legs without daring to engage in urban warfare.

Perhaps the PKK’s senior leaders in Qandil believe that they avoided the mistakes of Sur, Cizre and Silopi by evacuating Afrin. And they probably think they can impress their supporters by talking about strategic withdrawal and telling them that losing a battle is not the same as losing the war. But neither those comments nor threats by the YPG to make Afrin an ongoing nightmare for Turkey will change the fact that the group just suffered a humiliating defeat.

In just eight weeks, the terrorists lost a predominantly Kurdish region that they controlled for years. To be clear, this defeat marked a turning point for the YPG presence in northern Syria and the PKK’s future in Iraq. In addition to showcasing their operational capabilities, the Turkish military and its Syrian partners established that it would take just a few months to liberate all YPG-controlled regions of Syria if the United States were to stop protecting the group. Of course, Turkish troops and Syrian opposition deserve a lot of credit for the success of Operation Olive Branch. Other factors included their combat readiness, the effectiveness of train-and-equip programs and the YPG’s misguided decision to fight a conventional war against Turkey.

Although Western media would like to portray the operation as a massacre of Kurds, Turkey has been able to communicate effectively with domestic audiences as well as the people of Afrin. By carefully avoiding civilian casualties, the Turkish military sent a clear message that the operation targeted YPG militants as opposed to Syrian Kurds. Keeping in mind that U.S. operations in Mosul and Raqqa resulted in massive civilian casualties and the destruction of city centers, major urban centers such as Jinderis and Afrin remained unharmed throughout the operation.

More importantly, the strong leadership and determination of President Recep Tayyip Erdoğan was the driving force behind the victory in Afrin. In the absence of Erdoğan’s leadership, it would have been unimaginable for the Turkish military, which experienced the July 15 coup attempt and the dismissal of Gülenist officers, to carry out critical operations such as Euphrates Shield and Olive Branch. It was leadership that turned Turkey into a prominent player in the conflict zone and at the negotiating table.

Going forward, Turkey must draw out new military plans to remove terrorist groups from Tel Rifaat, Idlib and Manbij in Syria and Sinjar in northern Iraq. At the same time, the Turkish-backed forces must destroy improvised explosive devises (IEDs) and other explosives in Afrin, restore public order and, in cooperation with local Kurds, form a new local administration. Just like in the Euphrates Shield areas, Turkey must facilitate the return of Syrian refugees, in particular Kurds, to their homes in Afrin. The Afrin Liberation Congress in Gaziantep was a good start. To be clear, the takeover of the city of Afrin so quickly and without damage presented certain opportunities to Turkey, which could potentially refute claims by PKK commanders and Western governments that Ankara targets Kurds. Establishing a new order in Afrin together with local Kurds and Arabs who have been forced into exile by the YPG could establish that it was Turkey that brought peace and stability to Syrian Kurdish areas. Over the next weeks and months, it is possible to create genuine local democracy in Afrin, which the YPG was falsely assumed to have promoted.

The victory in Afrin marked the beginning of two crucial processes for Turkey. First, the future of the YPG in Syria is now part of negotiations and Turkey now has the upper hand in talks with other prominent players. The country proved that it was capable of getting results quickly and hinted that future operations could follow. Secondly, Turkey just stripped the YPG of its Kurdish card. By creating a peaceful environment in Afrin for Syrian Kurds, Ankara will establish once and for all that the YPG does not represent Kurds.

For the time being, let us ignore the YPG’s threats to make Afrin an ongoing nightmare for Turkey. They know perfectly well that destabilizing this predominantly Kurdish part of Syria would only hasten their defeat in other areas they currently control.

Lessons from Vietnam to Syria during McMaster's term
Previous