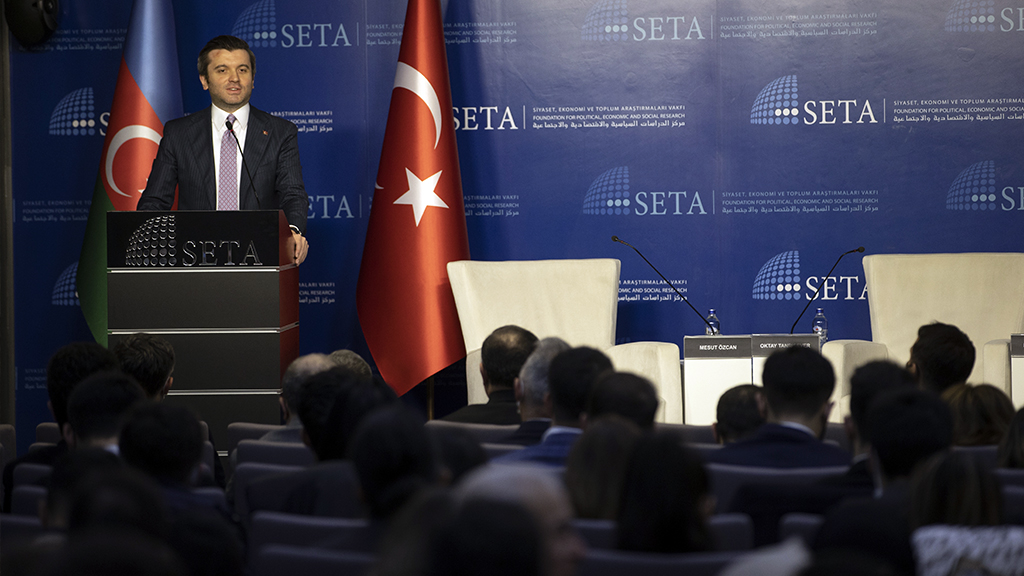 A conference titled "30th Anniversary of the Re-establishment of Turkey-Azerbaijan Diplomatic Relations" was held in Ankara by the Political, Economic and Social Research Foundation (SETA). Deputy Minister of Foreign Affairs Yavuz Selim Kıran (pictured), who attended the conference, made a speech in Ankara, Turkey on February 3, 2022.(Photo: Aytaç Ünal / AA)

Turkiye’s Deputy Foreign Minister Yavuz Selim Kiran hailed relations with Azerbaijan on Thursday while describing the liberation of Karabakh as a watershed moment that will open new opportunities.

Kiran spoke at the “30th Anniversary of re-establishment of Diplomatic Relations” conference at Ankara-based Foundation for Political, Economic and Social Research (SETA) and said Turkiye and Azerbaijan act as a unitary state if needed.

He said limiting relations between Turkiye and Azerbaijan to 30-years would “fall short” and noted the two countries are working to strengthen the common history and culture on the basis of international law via bilateral agreements.

Kiran stressed that one of the most important pillars of Turkiye’s foreign policy is “to ensure peace and stability in the South Caucasus,” adding that Turkiye views “the Karabakh Victory as a milestone and opens new windows of opportunity.”

Underlining that normalization of relations with Armenia is very critical, Kiran said: “It is extremely important for the Armenian side to approach in a way that promotes peace in the region, and to abide by the commitments regarding the cease-fire, especially in Karabakh.”

Citing the start of normalization talks between the special envoys of each country, Kiran said Turkiye will continue to carry out talks toward the normalization process on the axis of joint dialogue with Azerbaijan.

Turkiye was a key backer of Azerbaijan during the 44-day Karabakh war between Azerbaijan and Armenia, which erupted Sept. 27, 2020, and ended with a Russian-brokered cease-fire Nov. 10.

Turkiye and Armenia have long been at odds about a myriad of issues, including Armenia’s refusal to recognize a shared border to historical incidents involving the Ottoman Empire’s Armenian population during World War I in 1915.

Ankara has frequently encouraged Yerevan to tone down its confrontational posture and work for regional peace during the past year.

The first meeting of special representatives from both countries was held Jan. 14 in Moscow.

According to a statement by Turkiye’s Foreign Ministry, the parties exchanged preliminary views on the process “in a positive and constructive atmosphere” and “agreed to continue negotiations without preconditions aiming at full normalization.”

Can Erdoğan and Putin visits become a milestone?
Next
Loading...
Loading...
We use cookies to ensure that we give you the best experience on our website. If you continue to use this site we will assume that you are happy with it.Ok