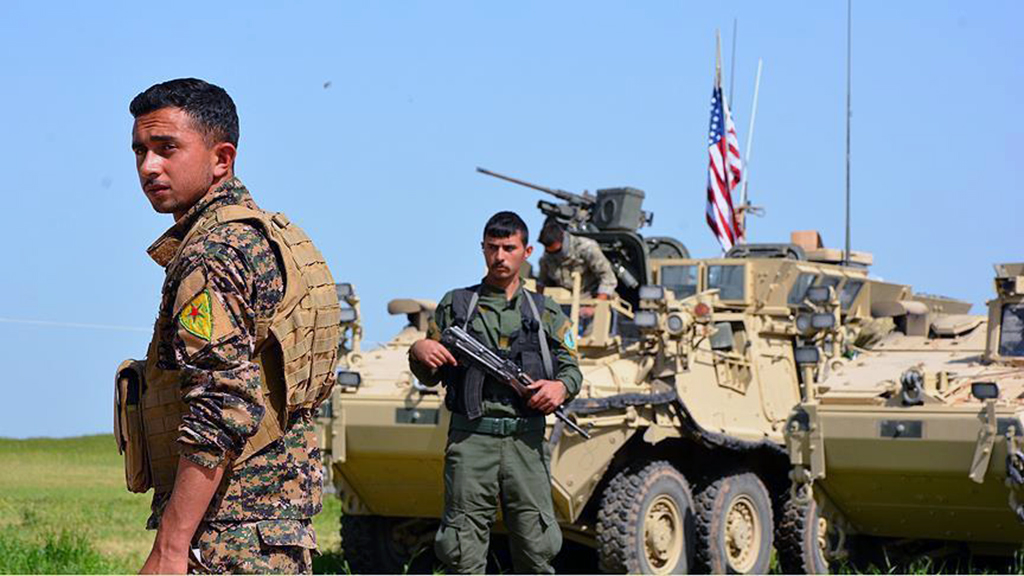 Turkey-U.S. relations at its lowest level

U.S. officials responsible for Washington's Syria policy have been suffering from a lapse of reason when it comes to judging Turkey's priorities. It would appear that they are content with the prospect of driving Turkey-U.S. relations to the ground by ignoring Ankara's concerns about the PKK-affiliated People's Protection Units (YPG) presence in northern Syria.

U.S. officials responsible for Washington’s Syria policy have been suffering from a lapse of reason when it comes to judging Turkey’s priorities. It would appear that they are content with the prospect of driving Turkey-U.S. relations to the ground by ignoring Ankara’s concerns about the PKK-affiliated People’s Protection Units (YPG) presence in northern Syria.

Earlier this week, U.S. representatives at the Global Coalition to Defeat Daesh announced that the YPG militants would be part of a newly established Border Security Force (BSF). In light of Turkey’s strong response and the revelation that NATO had not been consulted in advance, the U.S. backtracked on that decision. The Pentagon announced that it wasn’t going to transform the Syrian Democratic Forces (SDF) into an army or border guard of any sort. U.S. Secretary of State Rex Tillerson on Wednesday pledged to take “seriously the concerns of our NATO ally Turkey” about PKK terror. We must have Turkey’s close cooperation in achieving a new future for Syria, he added. Although tensions have been partly reduced, the YPG question will remain a problem area in Turkey-U.S. relations. After all, Washington seems committed to working with YPG militants and Defense Secretary James Mattis is known to support a plan to reconfigure the group as a police force. It is quite clear that the mixed messages aren’t just a byproduct of Washington’s overall confusion.

At some point, U.S. policymakers stopped caring about the damage inflicted on Turkey-U.S. relations by their continued support for the YPG militants. It would appear that they are prepared to lose Turkey’s friendship altogether. Perhaps this approach reflects the view that the U.S. does not need Turkey to get things done in the Middle East. Or maybe they think that Turkey has limited options and bilateral tensions could be kept under control with some skilled brinkmanship. However, it is important to understand that tensions between Ankara and Washington over the YPG question are getting out of hand.

In recent years, President Recep Tayyip Erdoğan patiently shared his country’s concerns with the Obama and Trump administrations alike. His most recent warnings, however, reflected a mix of frustration with the U.S. and a firm commitment to combat YPG terrorists: “Here’s our message to our allies: You must take away your insignia from the terrorists’ uniforms so that we won’t have to bury those along with the terrorists.”

Needless to say, Mr. Erdoğan’s language was possibly stronger than words used by a Turkish president about the U.S. at any point in history. In a way, it was reminiscent of the late İsmet İnönü’s response to U.S. President Lyndon B. Johnson’s 1964 letter: “A new world shall be established and Turkey will take its place in it.”

To be clear, we ended up here due to a series of missed opportunities in Syria over the past five years. Since May 2013, a disagreement over ways to deal with the Syrian civil war not only drove a wedge between the two allies but also turned it into a black hole that affected the entire relationship. Sadly enough, decisions made by U.S. officials only serve to further worsen the situation. The Raqqa operation, among others, was an important (yet unfortunately missed) opportunity for Turkey and the U.S. to work together again.

Right now, one of the biggest bilateral problems is the near-exclusive focus on problems, which makes it impossible for Ankara and Washington to focus on a positive agenda. The Trump administration’s commitment to work with YPG militants in northern Syria has reached a point where cooperation seems impossible. To make matters worse, there is plenty of talk about a potential confrontation between Turkey and the U.S. Let us recall that Washington repeatedly complained that the Turks were unable to mobilize enough moderate rebels. It viewed the whole thing as a question of military capacity and supported YPG militants in the name of fighting Daesh.

Turkish officials, in turn, are sick and tired of Washington’s efforts to disrupt their plans in Syria. There are many cases in point, ranging from the train and equip program for Sunni Arabs to the YPG militants. But here are two concrete examples: First, the U.S. was supposed to remove the YPG forces from Manbij. In truth, it started protecting the group. Second, U.S. officials promised that the weapons delivered to the YPG militants would be taken back once the anti-Daesh campaign was over. Although Daesh lost practically all of its territories in Syria and Iraq, Washington now moves to use the PKK-YPG as a border security force, which endangers Turkey’s vital interests.

The differences of opinion between Turkey and the U.S. have effectively become unsustainable. Whether U.S. officials are telling the endless story of Daesh or pledging to contain Iran, the Turkish public can no longer tolerate the selfishness of America’s tactical decisions. To make matters worse, supporting PKK terrorists for the sake of Iran’s containment would uncontrollably perpetuate current problems. At this point, strategic partnership and even alliance mean nothing at all. Today, U.S. officials are planting seeds of hostility and enmity. Unwilling to turn things around, the Trump administration seems ignorant of the reasons why Turkey considers the PKK an existential threat. Meanwhile, President Donald Trump urges Washington’s allies to recognize Hezbollah as a terrorist organization – what a joke! It is particularly noteworthy that the U.S. could make such calls without an ounce of shame, although it has been supporting the PKK behind the smokescreen of the SDF.

They say that interests take precedence over principles. Such egoism, however, inflicts irreparable damage to the common ground of rational interests.

The fight against separatist terrorism is vital for Turkey, whose neighbors include Syria and Iraq. In other words, combating separatism takes precedence over Ankara’s partnership with the U.S. and, more broadly, the West. Efforts to stop the Turks from taking action against PKK terrorists could be seen as forcing them to choose their side and allies – specifically, to choose more comprehensive cooperation with Russia and Iran.

In this sense, it is important to understand that Washington’s efforts to transform YPG militants into a regular army would have repercussions that cannot be compared to tensions caused by America’s support for the Gülenists and the Atilla case. It is quite ironic that no member of the Trump administration is trying to save Washington’s relationship with Turkey. To be clear, the relationship seems doomed to destruction – unless verbal efforts by Mr. Tillerson and Mr. Mattis to address Turkey’s concerns are backed by a change of Washington’s YPG policy and the American government suddenly decides to keep their promises. Still, progress could be made if the U.S. appreciates Turkey’s commitment to launching military operations in Afrin and Manbij and takes concrete steps toward renewed cooperation.

A new page must be turned in Turkish-EU ties, but how?
Next
Loading...
Loading...
We use cookies to ensure that we give you the best experience on our website. If you continue to use this site we will assume that you are happy with it.Ok