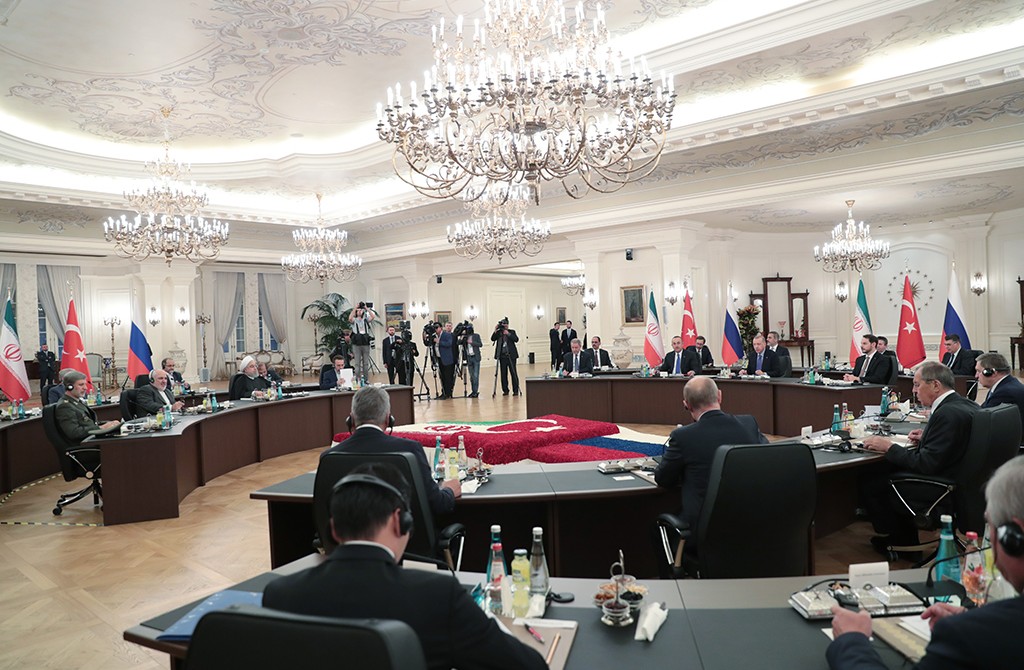 President of Turkey Recep Tayyip Erdogan, President of Russia Vladimir Putin and President of Iran Hassan Rouhani brief the media at the Turkey-Russia-Iran trilateral summit at Cankaya Mansion in Ankara, Turkey on September 16, 2019.

Çankaya Palace in Ankara was home to a historic trilateral summit on Monday. The presidents of Turkey, Russia and Iran met for the fifth time in two years to discuss the situation in Idlib, refugees, the most recent developments in northeastern Syria and the proposed constitutional committee.

Çankaya Palace in Ankara was home to a historic trilateral summit on Monday. The presidents of Turkey, Russia and Iran met for the fifth time in two years to discuss the situation in Idlib, refugees, the most recent developments in northeastern Syria and the proposed constitutional committee.

As President Recep Tayyip Erdoğan noted in front of the cameras, the Astana process “remains the only mechanism capable of facilitating concrete steps in Syria.” Recalling the Adana pact of 1998, Iran’s President Hassan Rouhani described the U.S. as an occupying power and condemned Israeli attacks. Russian President Vladimir Putin, in turn, stressed the importance of fighting extremist groups and opposed Syria’s division into spheres of influence. In other words, the three leaders endorsed Syria’s territorial integrity and political unity.

The Ankara summit enabled Turkey, Russia and Iran to review the Sochi agreement’s implementation. Moreover, Presidents Erdoğan and Putin went over the issues they discussed bilaterally on Aug. 28. At the committee level, the state of the M4 and M5 highways, the fate of Hayat Tahrir al-Sham (HTS), attacks on Turkish observation posts and the preservation of de-conflicting mechanisms were also presumably on the agenda.

The Ankara summit’s timing was significant. Tensions had been escalating in Idlib against the backdrop of Turkey’s cooperation with the U.S. to set up a safe zone in northeastern Syria. Ankara responded to harassing fire by the Bashar Assad regime against Turkish military outposts by threatening to retaliate. At the same time, some 700,000 of Idlib’s residents were displaced, ringing alarm bells in European capitals. In the end, Erdoğan’s meeting with Putin kept a lid on those tensions.

A day before the summit, the Assad regime filed a complaint with the U.N., describing the Syrian Democratic Forces (SDF) as a separatist terrorist organization. This development took place just as Iranian-backed Houthi rebels attacked Saudi Arabia’s largest oil refinery, raising questions about the safety of Gulf petroleum.

U.S. Secretary of State Mike Pompeo was quick to hold Iran responsible for the assault as President Donald Trump suggested that Washington could strike Iran upon confirmation of Tehran’s involvement. Crushed by harsh U.S. sanctions, Iran thus demonstrated that it was still a powerful regional player. Tehran also established that its proxies are capable of inflicting severe damage to Saudi Arabia, Washington’s top ally in the region. The attack leaves Trump, who just fired John Bolton, his third national security adviser, having to think – albeit reluctantly – about military action against Iran ahead of next year’s presidential election. After all, Tehran continues to respond to Washington’s “maximum pressure” strategy with “hot pressure” against U.S. allies.

The Ankara summit took place at this critical juncture, reaffirming the commitment of three guarantors with conflicting interests to make the Astana process work. Turkey, Russia and Iran already agreed on the constitutional committee’s members. Its working methods will be determined in the future. Together, the three governments will take additional security measures in the Idlib de-escalation zone. As Russian Foreign Minister Sergey Lavrov said, however, it is still too early for the Syrian civil war to end and for the country’s political life to go back to normal.

It takes lengthy deliberations and the projection of power around the negotiation table to make such trilateral summits work. With the fate of the HTS group and Syrian refugees still unclear, the Idlib question cannot be resolved permanently. Still, Assad’s complaint about the SDF suggests that Damascus will mount pressure on the People’s Protection Units (YPG), the PKK terrorist group’s Syrian affiliate.

The Ankara summit established that each step taken within the context of the Astana process will make life harder for YPG militants.

The Iranian president arrived in the Turkish capital to discuss economic matters as well. At the 27th session of the Turkey-Iran Joint Economic Commission yesterday, the two countries exchanged views on those issues. Tehran is eager to increase the bilateral trade volume to $30 billion and develop mechanisms to circumvent U.S. sanctions, which cost Iran $1 billion per week.

Turkey, in turn, continues to use the pendulum swinging between the west and east of the Euphrates River to its advantage. Erdoğan’s upcoming meeting with Trump on the U.N. General Assembly’s margins will be of critical importance.

Still too early to be optimistic about stability in Syria
Previous

Has the Iran war already begun?
Next
Loading...
Loading...
We use cookies to ensure that we give you the best experience on our website. If you continue to use this site we will assume that you are happy with it.Ok