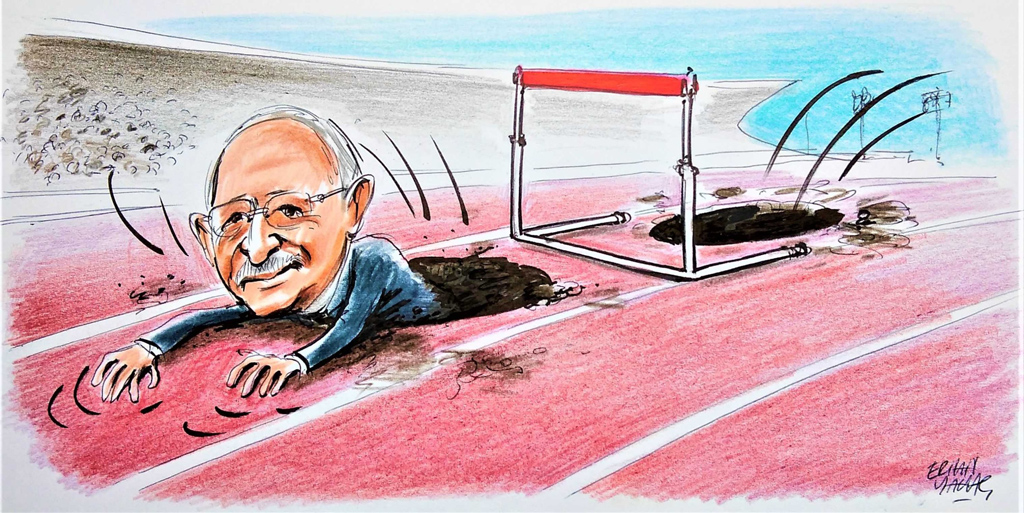 With his misleading and miscalculated political discourses, the main opposition leader Kemal Kılıçdaroğlu is crossing the line that places the future of all of Turkey at risk

I wrote last week that the main opposition Republican People’s Party (CHP) Chairperson Kemal Kılıçdaroğlu was about to reach the point where his failure to run for president would be costly to his party.

It is for the opposition to decide whether the “table for six” will accept the imposition of a CHP-affiliated candidate or whether each party will nominate its own candidate.

There is, however, a significant line – one that Kılıçdaroğlu crossed a while back. He seems determined to walk a path that deliberately fuels tensions in Turkey’s political life. That is the line of opposing the government with an eye on one’s democratic responsibilities.

Looking out for the country’s interests and respecting democratic institutions, too, are part of the opposition’s job. To criticize is a right – and, indeed, a duty – as long as criticism does not undermine democratic legitimacy, paint a target on anyone’s back, portray anyone as the enemy or threaten anyone in any way.

Kılıçdaroğlu, however, speaks a destructive and aggressive language. He frequently lashes out at people, threatening the bureaucracy and judges. He also makes false accusations, already trying to undermine the population’s confidence in election results by making bogus allegations.

Despite paying lip service to “making amends,” the main opposition leader lends a voice to combative, threatening and revanchist arguments.

Most recently, Kılıçdaroğlu alleged that President Recep Tayyip Erdoğan and his family were making preparations to “flee the country.” He also claimed that some nongovernmental organizations (NGOs) serve as “parallel structures.” Using certain words, which are regularly used to describe the Gülenist Terror Group (FETÖ), to talk about people around Erdoğan, he attempts to fuel fear and create an atmosphere of revenge.

Kılıçdaroğlu may think that using such destructive, negative and securitizing language will make him seem like someone who can compete with Erdoğan. He could also be doing those things to relieve the secularists’ anger. One could also think that Kılıçdaroğlu thus united his party’s base around himself as a presidential candidate. Indeed, he could be thinking that keeping the “table for six” intact would be enough, believing that he will contest the second round of the presidential election.

Kılıçdaroğlu and his party are entitled to make such calculations.

Still, I believe that Kılıçdaroğlu’s angry rhetoric makes it harder for the Felicity Party (SP), the Future Party (GP) and Demoracy and Progress Party (DEVA) to work with the CHP. At the same time, I argue that such behavior moves Kılıçdaroğlu away from the kind of “peaceful” and “inclusive” joint candidate that the “table for six” set out to endorse.

Furthermore, I have no reason to believe that the pro-government People’s Alliance is unhappy with Kılıçdaroğlu’s current profile either.

What really matters though is what the main opposition leader actually hopes to accomplish and the impact of his destructive discourse on Turkey’s democracy.

Kılıçdaroğlu will probably lend a voice to any allegation or accusation that he is presented in the name of effective opposition, without caring about whether they are truthful or not. He seems to only care about the perceived usefulness of the discourse. Kılıçdaroğlu’s advisers appear to have talked him into this method already. Yet that road does not lead to receiving votes from all social groups.

Indeed, the main opposition leader’s current profile is completely incompatible with the responsibility of being a statesman. Quite the contrary, it seems that some people would like Kılıçdaroğlu to attract all the negative attention and assume the liability for a seemingly positive candidate.

Of course, it is possible that Kılıçdaroğlu has voluntarily signed off on that approach. He could keep a combative profile until the campaign and hand over the candidacy to a supposedly more inclusive politician. The government circles also need to keep that possibility in mind.

Still, what matters more is the damage that Kılıçdaroğlu’s rhetoric, which criminalizes a certain social group, inflicts on our democracy.

I am not sure whether describing some NGOs, which are close to Erdoğan, as a “parallel structure” – which was the phrase that the National Security Council (MGK) used to describe FETÖ – is criminal, but it is clearly an act of provocation that undermines social peace.

Kılıçdaroğlu crossing that line places at risk the future of all of Turkey.

Football and politics: The French fiasco
Next
Loading...
Loading...
We use cookies to ensure that we give you the best experience on our website. If you continue to use this site we will assume that you are happy with it.Ok