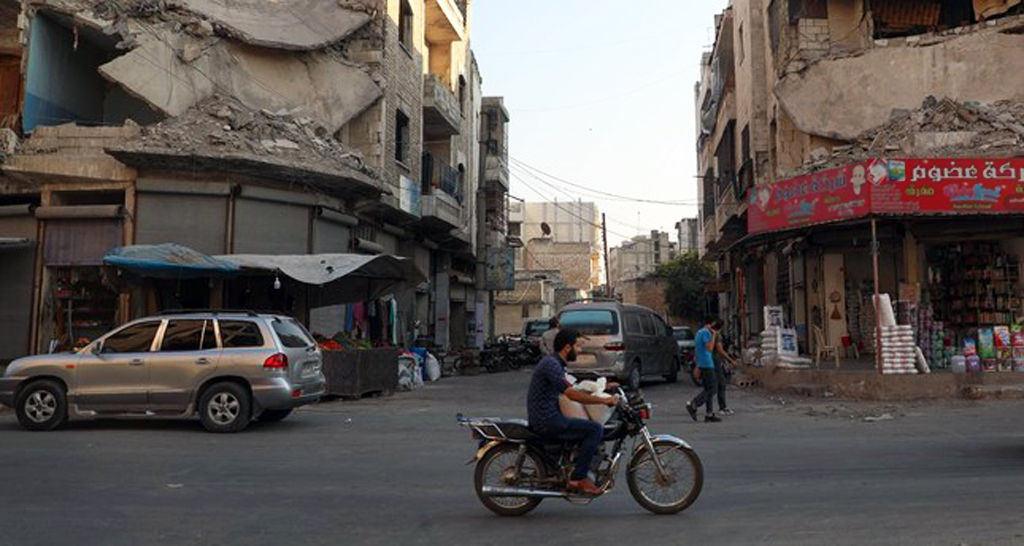 Still too early to be optimistic about stability in Syria

An important meeting was held between the leaders of Turkey, Iran and Russia in Ankara on Sept. 16. The three actors' positions were close in the last trilateral meeting. The leaders of the three countries agreed on the structure of the constitutional commission and reiterated their commitment to the territorial integrity of Syria. They also supported the idea of reducing the tensions in Idlib province.

An important meeting was held between the leaders of Turkey, Iran and Russia in Ankara on Sept. 16. The three actors’ positions were close in the last trilateral meeting. The leaders of the three countries agreed on the structure of the constitutional commission and reiterated their commitment to the territorial integrity of Syria. They also supported the idea of reducing the tensions in Idlib province. Despite the productive meeting that brought the guarantors of the Astana peace process closer, there are still uncertainties surrounding the situations in Idlib and east of the Euphrates. Idlib still constitutes the most urgent issue that needs to be addressed to avoid a humanitarian crisis.

Two rival resolution drafts were voted upon on Sept. 19 to be turned into United Nations Security Council resolutions.

The first proposal came from Belgium, Germany and Kuwait; the second from China and the Russian Federation. Both proposals were rejected by the council.

The two rival drafts also reflect the diverging positions on the subject. Indeed, the disagreement on the council’s resolution also reflects the ongoing disagreements on the Syrian crisis. The maintenance of the current status quo works for the interests of the regime, which is regaining control of the western part of the country with the support of Russia and Iran.

Belgium, Germany and Kuwait’s joint proposal called for parties to immediately cease hostilities to avoid a further deterioration of the humanitarian situation in Idlib. The draft proposal called for a cease-fire for all parties, beginning at noon Damascus time on Sept. 21.

The proposal got 12 affirmative votes and one abstention, from Equatorial Guinea, but was vetoed by the negative votes of two permanent members, China and the Russian Federation.

The second draft proposed by China emphasized that the “cessation of hostilities shall not apply to military operations against individuals, groups, undertakings and entities associated with council-designated terrorist groups.”

China’s proposal was rejected with nine votes against and four abstentions. Only Russia voted in favor of the Chinese proposal. The failure of the first proposal meant the continuation of the status quo and tension in Idlib.

The Security Council’s split on the Idlib issue demonstrates the difficulty of finding a solution to the crisis. As a frame of reference, Russia and China still see the situation as a struggle against terrorism and underestimate the humanitarian dimension and the conditions of the civil war. Whereas the majority of international actors are more concerned about the humanitarian dimension and the risks posed by the Idlib issue but are not committed enough to change the current stalemate.

The disagreement on the Idlib issue continued during the trilateral meeting, which was hosted by President Recep Tayyip Erdoğan in Ankara with the participation of Russian President Vladimir Putin and Iranian President Hasan Rouhani.

While Turkey is deeply concerned about the ongoing humanitarian crisis in Idlib that restarted a refugee flow to Turkish border, Turkey does not want to be the only actor dealing with the humanitarian problem in Idlib.

Russia is committed to dealing with the Hayat Tahrir al-Sham (HTS) through military means, whereas Turkey is skeptical about the success of such an option.

The Russian and Iranian parties agreed to reduce the tension in Idlib but still insist on a military solution against the HTS. It would be extremely difficult to remove the HTS completely from Syria.

Turkey has neither the capacity nor the willingness to engage in an armed struggle against the HTS. The Democratic Union Party (PYD) constitutes the fundamental security threat against Turkey, and Washington is still committed to supporting the PYD militarily in eastern Syria.

Washington’s efforts to use the terrorist group as a leverage against the Syrian regime, and also implicitly against Turkey, prevent further cooperation between Turkey and the U.S. on the Syria issue.

Further escalation in Idlib is possible due to the tension going on in the other parts of the region. After the recent attacks on Saudi oil facilities, Saudi Arabia may also increase its support of actors fighting against Iran and its regional proxies.

It is clear that if war doesn’t erupt between Iran and Saudi Arabia, which seems impossible for the moment due to President Donald Trump administration’s unwillingness to engage in a new war in the region, the proxy struggle in the region will intensify.

A new trend may risk the stability in the Syrian context as well. Another risk factor is related to Israel’s position on Syria. Israel is concerned about Iran and its proxies’ activities in Syria.

Positive relations between Putin and Israeli Prime Minister Benjamin Netanyahu helped reduce Israel’s security concerns emanating from Syria. However, it is not clear how the Russian and Israeli parties will maintain their relations after Netanyahu’s inability to gain a parliamentary majority in the recent elections.

The internal dynamics of the Syrian civil war seem to be closing in on a political solution. In the trilateral meeting, the parties agreed on the details of the constitutional commission. Uncertainties in Idlib and east of the Euphrates are still significant obstacles to a holistic political road map that would end the ongoing civil war in Syria. Syria cannot be isolated from the rising tensions in the region, and the current escalation has the potential to further destabilize it.

Turkey, Russia and Iran continue to shape Syria's future
Next
Loading...
Loading...
We use cookies to ensure that we give you the best experience on our website. If you continue to use this site we will assume that you are happy with it.Ok