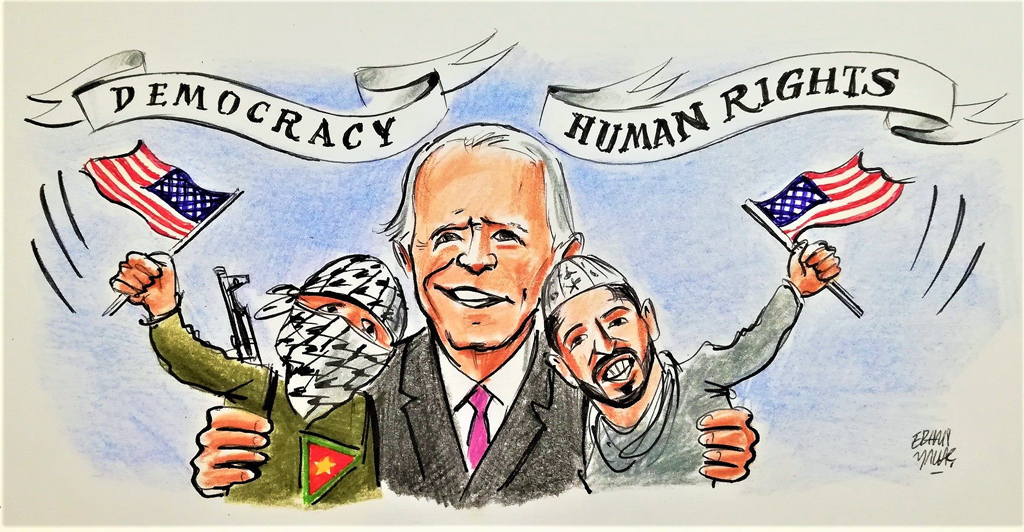 Return to sender: US letter about Turkey backfires

Washington, which supports terrorist entities like FETÖ and the PKK, will undoubtedly face stronger criticism from all echelons of Turkish society.

ighty-seven Turkish parliamentarians responded to a scandalous letter that 54 United States senators sent to U.S. President Joe Biden on Turkey. The statement, which members of four major parties – except the Peoples’ Democratic Party (HDP) – signed, reminded the American lawmakers that their remarks contradicted the spirit of the Turkey-U.S. alliance. Mustafa Şentop, the Turkish Parliament’s speaker, also condemned the letter.

Underlining that the Turkish people overwhelmingly believe Washington to be responsible for military coups and interventions, “especially the July 15 coup attempt,” the parliamentarians warned of the consequences of U.S. senators being “complicit” in the smear campaign orchestrated by the Gülenist Terror Group (FETÖ).

Let us not forget that a group of U.S. senators previously urged Biden to “put pressure” on President Recep Tayyip Erdoğan, in the name of democracy and human rights.

Moreover, the authors of said letter criticized Turkey’s foreign policy, expressed support for the PKK/YPG and brought up once again Ankara’s decision to buy the S-400 air defense system from Russia. They also accused Turkey of encouraging the use of violence in Nagorno-Karabakh.

Possibly the most ridiculous aspect of the senators’ letter, however, was the portrayal of Enes Kanter, a self-proclaimed Gülenist, as a human rights defender.

It would appear, though, that the aforementioned group of U.S. senators have conveniently chosen to disregard that their own country is suspected of being involved in the July 15, 2016 coup attempt in Turkey by an overwhelming number of spectators.

To add insult to injury, they attempt to downplay what happened on that date. Turkey has every reason to expect more from the U.S. and it seems the growing anti-Turkish sentiment in the U.S. Congress is a problem the Biden administration will need to keep under control.

After all, Washington stands no chance of appealing to the Turkish people or the opposition if endorsing FETÖ.

Likewise, Turkey’s opposition parties would undermine their own popular support if they were to “beg” the United States for democracy or support Washington’s pressure on Erdoğan.

That’s why Engin Altay, a minority whip with the main opposition Republican People’s Party (CHP), was compelled to tell the Americans to “mind their own business.”

At the same time, he urged the Turkish president to keep protecting his country’s interests in the Eastern Mediterranean, the Aegean Sea, Cyprus and Syria, declaring: “You are to make no concessions. We will support you.”

It is no secret that Joe Biden’s doctrine, “America is Back,” attaches importance to American values in its foreign policy.

According to experts, democracy and human rights will play an important role as the new administration seeks to consolidate its domestic support and repair Washington’s relations with its allies.

The fact that the chosen approach is a direct response to former President Donald Trump’s unadulterated emphasis on raw interests is perfectly clear.

Judging by Biden’s emphasis on “human rights” in his phone call with China’s President Xi Jinping, his advocacy of LGBTQ rights, his revised approach to the war in Yemen, Washington’s increasingly vocal criticisms of Russia and now the senators’ letter, it seems “values” will play a more influential role in U.S. foreign policy.

New Secretary of State Antony Blinken’s family history and initial statements released by his department suggest that the United States plans to utilize “democracy and human rights” as a tool, value and strategy.

Obvious questions need to be answered, including how seriously Washington plans to promote these values, to what extent and against whom. Not to mention what the implications of those decisions will be.

What we know for now is that “democracy and human rights” will be the bread and butter of America’s global leadership. We also know that Washington’s geopolitical interests will be weaved into that rhetoric.

Will the policy be effective? The interests of U.S. allies around the world, including the Europeans, are unlikely to align with American priorities.

It is one thing to criticize the human rights record of Russia or China, but it is quite another thing to sanction them, and yet another to legitimize some kind of containment.

Can Washington put enough pressure on Germany, for example, to scrap the Nord Stream 2 project and ignore its own national interest? The Cold War years, when the primary objective was to fight communism, are long gone.

Furthermore, the contemporary history of the Middle East is characterized by destruction thanks to Washington’s hypocritical policy of “democracy promotion.”

Putting pressure on Turkey, a key NATO ally, in the name of democracy would only reveal the selfish motivations behind the new U.S. administration’s “values.”

Targeting a nation, which managed to defend its democracy against nearby civil wars, terrorist groups and coup plotters for the last seven years, with reference to “human rights” would only serve to fuel anti-American resentment among the Turkish people.

As a consequence, Washington, which supports terrorist entities like FETÖ and the PKK, will undoubtedly face stronger criticism from all echelons of Turkish society.

At the end of the day, the opposition, too, would – willingly or otherwise – support Erdoğan’s government for the sake of protecting Turkey’s national interests whether it be the Eastern Mediterranean or Nagorno-Karabakh.

Biden's test with US integration in new world dynamic
Previous

PKK's Gara attack a litmus test both at home and abroad
Next
Loading...
Loading...
We use cookies to ensure that we give you the best experience on our website. If you continue to use this site we will assume that you are happy with it.Ok