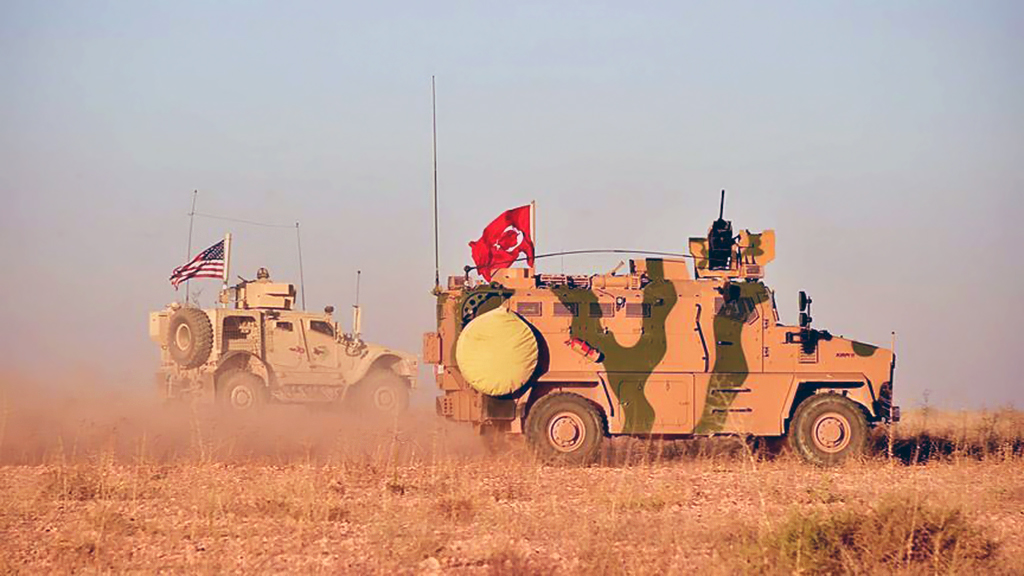 Trump tweeted victory over Daesh and said he was pulling US troops from Syria. Turkey and Russia have welcomed the decision. France and the UK say they're staying engaged. The US withdrawal could change the balance of forces in the Syrian war.

US officials on Wednesday said President Donald Trump was pulling US troops out of Syria.

In a tweet, Trump claimed victory over Daesh and tweeted later that over 2,000 US troops and officials will be withdrawn from the war-torn country and return home soon.

US officials say all State Department personnel would depart Syria within the next 24 hours while US forces will leave within 60 to 100 days.

The move comes as Turkey is preparing an operation against the YPG terror group in northern Syria.

The YPG dominates the SDF, a coalition of anti-regime forces which the US backs in the fight against Daesh in Syria.

Ankara welcomes the US decision to withdraw its troops from Syria, Turkish foreign minister said on Friday.

“With regards to withdrawal decision of the U.S. … from Syria, we welcome the decision,” Mevlut Cavusoglu said at a joint news conference with his counterpart Carmelo Abela in the Maltese capital of Valletta.

Turkey fully supports the territorial integrity of Syria, he added.

“We believe that Daesh is defeated but still we should be very vigilant because Daesh and other radical groups are still on the ground,” Cavusoglu said.

The Turkish foreign minister said he and other Turkish officials have already been in touch with US officials “at different levels” on the issue.

Putin said he agreed with the US president that the demise of Daesh removes the need for the US military presence in the country.

Putin reaffirmed the long-held Russian argument that the US presence in Syria is illegitimate because it was neither vetted by the UN Security Council nor approved by the regime of Bashar al Assad.

Putin added that “if the US decided to withdraw its contingent, it has done the right thing.”

Russia is a key ally of Assad, and its military intervention in Syria beginning in 2015 turned the tide of the war in his favour.

The Russian leader says it remains to be seen if the US follows through on Trump’s announcement, noting Washington’s repeated promises to end its 17-year presence in Afghanistan.

Israel to escalate fight against Iran in Syria after US exit

Israel will escalate its fight against Iran-aligned forces in Syria after the US withdrawal, Prime Minister Benjamin Netanyahu said on Thursday.

Some Israeli officials believe Trump’s move could help Iran by removing a US garrison that stems the movement of Iranian forces and weaponry into Syria from Iraq.

“We will continue to act very aggressively against Iran’s efforts to entrench in Syria,” Netanyahu said in televised remarks, referring to an Israeli air campaign in Syria against Iranian deployments and arms transfers to Lebanese Hezbollah forces.

“We do not intend to reduce our efforts. We will intensify them, and I know that we do so with the full support and backing of the United States.”

The US has rationalised its presence in Syria by pointing to the YPG-dominated SDF’s record battling Daesh and the Assad regime.

The SDF on Thursday rejected Trump’s claim that Daesh had been defeated and said the withdrawal of US troops would lead to a Daesh resurgence.

The group said in a statement that a premature US troop pullout would have dangerous repercussions and a destabilising effect on the region.

The YPG is the Syrian wing of the PKK which the US, Turkey and the EU agree is a terrorist organisation.

In a decades-long terror campaign against Turkey, the PKK has been responsible for the deaths of some 40,000 people, including women and children.

Both countries say they will continue backing the SDF.

France’s European Affairs Minister Nathalie Loiseau said, “for now of course we remain in Syria,” adding “the fight against terrorism is not over.”

France has stationed fighter jets in Jordan and artillery along the Syrian border in Iraq as part of the coalition, as well as an undisclosed number of special forces on the ground.

For their part, Britain takes part in air strikes for the coalition.

A statement issued by the British government insisted “much remains to be done” in fighting Daesh in Syria.

The statement from London said, “We remain committed to the global coalition and the campaign to deny Daesh territory and ensure its enduring defeat, working alongside our critical regional partners in Syria and beyond.”

The US announcement comes as Turkey is preparing for an imminent counter-terrorist military operation in Manbij and parts of Syria east of the Euphrates River.

The target: YPG terrorists who are part of the US-backed SDF.

Turkey wants to prevent the YPG from establishing a “terror corridor” across its southern border with Syria.

Defence Minister Hulusi Akar on Thursday said, “We have Manbij and east of the Euphrates ahead of us right now. We’re working intensely in this regard. Terrorists are said to be digging some trenches and tunnels in Manbij and east of the Euphrates. Whatever they dig, trenches or tunnels … when the time comes they [YPG] will be buried in the trenches that they dig. Of this there should be no doubt.”

Akar added, “We are following developments closely. Operational and intelligence units of the Turkish Republic have been making every kind of effort that they can and continuing to work night and day to discharge their duties in the best way.”

Trump phoned Erdogan on Friday last week in a discussion that included Turkey’s plans to hit the YPG in Syria.

TRT World spoke to Kadir Ustun, Executive Director of the SETA Foundation, on Turkey’s concern at US support for the SDF.

If Trump means business, his best option is to work with Turkey
Previous

The age of female leadership in politics?
Next
Loading...
Loading...
We use cookies to ensure that we give you the best experience on our website. If you continue to use this site we will assume that you are happy with it.Ok