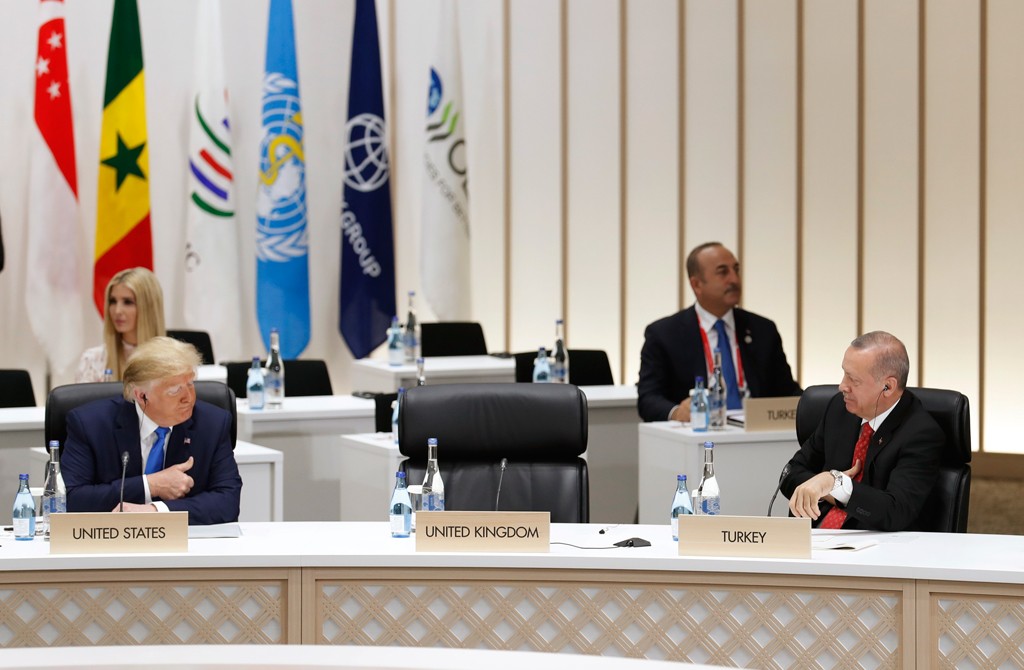 Let’s give diplomacy a chance

Erdoğan’s lengthy consideration wasn’t a sign of confusion. Nor did the main opposition Republican People’s Party’s (CHP) call on the president to cancel his trip in response to Trump’s indelicate letter to Erdoğan. After all, the Turkish government had already responded to that letter by launching Operation Peace Spring. Erdoğan proceeded to reach an agreement with U.S. Vice President Mike Pence on the proposed safe zone in northeastern Syria.

Instead, the Turkish president waited to see what would be up for discussion in his potential meeting with Trump. If the administration maintained a positive attitude and intended to tackle key issues, he thought, it would be worth ignoring the negative reaction from the U.S. Congress.

On Nov. 13, Trump tweeted, the two leaders will talk about plenty of issues, including the fight against Daesh, the safe zone, and the fate of the People’s Protection Units (YPG) – the PKK terrorist organization’s Syrian offshoot. Having arrested Abu Bakr al-Baghdadi’s family members, Turkey is in a position to reassure the Trump administration that it can deliver on its promises regarding Daesh. Other issues, including Turkey’s intention to procure the Patriot air defense missile system, the F-35 fighter jets, and increasing the bilateral trade volume, will also be on the table.

The Turkey-U.S. relationship has been plagued by problems since 2013. At the heart of those problems is Washington’s misguided policy on Syria. The United States refuses to acknowledge Turkey’s independent foreign policy. Under President Barack Obama, Washington betrayed Turkey, its NATO ally, to take a series of hostile steps against Turkish interests. In addition to delivering thousands of truckloads of weapons to the YPG, the Obama administration turned down Turkey’s request for the extradition of Fetullah Gülen – the mastermind of the July 15, 2016 coup attempt in Turkey. U.S. legal action against Halkbank, together with sanctions and anti-Turkish resolutions adopted by the House of Representatives in recent weeks, have led to a further deterioration in bilateral relations.

Washington’s steps go beyond a difference of opinion over policy. Instead, the Turks see these U.S. actions as acts of hostility toward their national interests. To be clear, that situation is no less disturbing than Trump’s indelicate letter.

Despite everything, Turkey remains committed to making its relationship with the United States work. It ignored symbolic offenses to keep diplomatic channels wide open. Had the Turks been preoccupied with symbolism, they would have severed their ties with Washington over the latter’s continued support for the PKK in Syria and efforts to aid and abet Fetullah Gülen.

Meanwhile in Washington, the situation took a turn for the worse. Congress, together with the U.S. media and bureaucrats, succumbed to anti-Turkey sentiment. Trump distanced himself from that crowd by working with the Turkish president. He was thus able to keep a lid on the S-400 crisis and reach an agreement with Turkey on the safe zone. Under Trump’s watch, Ankara was able to push the YPG some 30 kilometers away from its border with Syria – a major accomplishment.

Washington’s relationship with the YPG and the Gülenist Terror Group (FETÖ) continues to poison bilateral relations. What Turkey needs to do, however, is to keep negotiating rather than lashing out. Despite everything, Erdoğan understands that Trump is the single most powerful player in Washington that Turkey can engage. Hence his decision to meet Trump on Nov. 13 to share Turkey’s views and concerns with the U.S. president in person.

The dispute over the safe zone is not over – Turkey will get there step by step. The Turkish leader will follow up on earlier agreements with his Russian and American counterparts. That’s what Erdoğan did by accepting Trump’s invitation to the White House.

The Turkish administration’s top priority is Operation Peace Spring. Erdoğan wants to remove the YPG from the Turkey-Syria border permanently and facilitate the safe return of Syrian refugees to their native lands. There is still much to do to end the Syrian civil war. Therefore, Turkey cannot afford to lose contact with Donald Trump or Russian President Vladimir Putin.

Erdoğan’s direct contacts with his Russian and American counterparts were behind the recent improvements in bilateral relations. The U.S. Congress might try to spoil the mood, but Turkey must keep giving Trump and diplomacy a chance. Meanwhile, the Turkish opposition’s knee-jerk response undermines national interest. On that front, the CHP and the Good Party (İP) need to learn from Nationalist Movement Party (MHP) Chairman Devlet Bahçeli.

US support for YPG based on incorrect assumptions
Previous

NATO's crisis in tackling terror threats
Next
Loading...
Loading...
We use cookies to ensure that we give you the best experience on our website. If you continue to use this site we will assume that you are happy with it.Ok