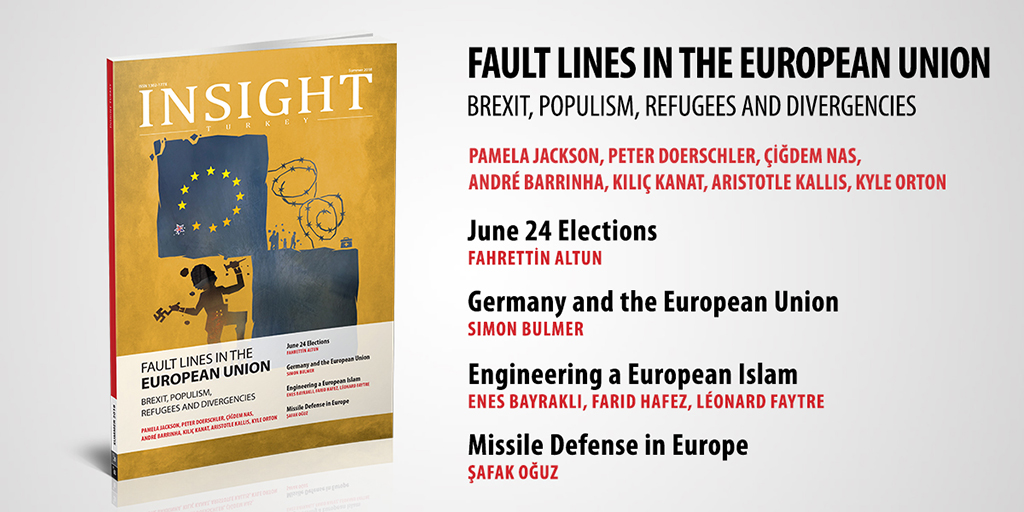 Insight Turkey, one of the leading academic journals in Turkey and the Middle East, discusses the European Union in its final issue.

Insight Turkey, one of the leading academic journals in Turkey and the Middle East, discusses the European Union in its final issue. “Fault Lines in the European Union: Brexit, Populism, Refugees and Divergencies” assesses the crisis EU is going through and provides striking perspectives regarding rising populism, far right, Turkey’s relations with the EU and the latter’s relations with world powers, i.e. the U.S., Russia.

Simon Bulmer’s commentary focuses on the sources of German hegemony within the EU after Brexit while other authors, Sertan Akbaba and Aristotle Kallis, in their pieces scrutinize the narratives of populists and far right parties in Europe and how they are becoming mainstream and normalized. On the other hand, Pamela Jackson and Pete Doerschler intend to see the other side of the medal in their article and measure how Muslims in Europe respond to the precarious rise of the far right. In relations to the same topics, Enes Bayraklı, Fared Hafez and Léonard Faytre evaluate how European countries try to create a “European Islam” by controlling and “domesticating” Muslims through the state mechanism.

In the context of EU-Turkey relations, Hakan Samur and Mehmet Ekinci explore the support for the EU in Turkey’s Kurdish population. Çiğdem Nas and Serdar Altay discuss the update of the Customs Union which is one of the most important agenda topics in Turkey-EU relations lately.

Another topic this issue tackles on is the relations between the EU and other world powers. Kılıç Buğra Kanat discusses the transatlantic relations in the Trump era while André Barrinha states that Europe consolidates itself as an important actor in the field of cyber security against the growing Russian threat. Şafak Oğuz claims that the missile defense system established by the U.S. is against Russia rather than Iran. Lastly, Kyle Orton explains how the foreign fighters that fought in Syria against ISIS are now going back in their homelands, mainly Europe, becoming a serious threat to its security.

Apart from the cover issue there are two other essays in this issue. First of these is the commentary that interprets Turkey’s June 24 Elections by Fahrettin Altun. Altun discusses the meaning of these elections for Turkey, which enables the reconstruction of Turkish political system. In the other article, Mirsad Krijestorac notes that religious and ethnic diversity in the Balkans can be used to bring people together instead of being a cause of separation.

We are confident that this issue of Insight Turkey provides in depth information on important issues that are directly related to the EU and should be read carefully by anyone interested in the EU policies and its future.

When bilateral relations depend on common sense
Previous

Trump damages the global system the US established
Next
Loading...
Loading...
We use cookies to ensure that we give you the best experience on our website. If you continue to use this site we will assume that you are happy with it.Ok