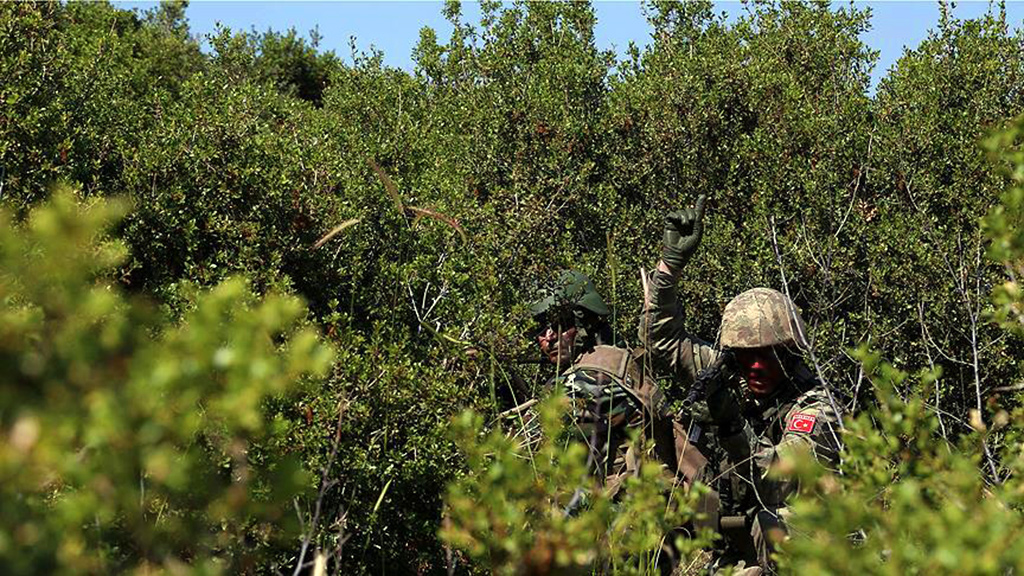 How to tackle the remnants of Daesh

As the last remaining Daesh territory is on the verge of elimination, a worrying number of Daesh militants, mostly women and their children, have surrendered themselves to the People's Protection Units (YPG).

As the last remaining Daesh territory is on the verge of elimination, a worrying number of Daesh militants, mostly women and their children, have surrendered themselves to the People’s Protection Units (YPG).

More than 66,000 people have quit the Baghuz pocket including Daesh members who have surrendered to the YPG since Jan. 9 and are being transported to the Al-Howl camp in Hasakah, where more than 65,000 people are currently being held altogether.

Some of those people have expressed an interest in going to Turkey and their home countries rather than staying in the camp forever. The future of thousands of Daesh captives in the hands of the YPG, the Syrian branch of the PKK terrorist organization, might evolve into a serious threat for Turkey and the entire region.

What will happen to these people gathered together in a single camp? Daesh members already pay smugglers to cross from Syria into Turkey, and try to establish cells to conduct terrorist attacks.

Furthermore, the YPG is eager to use these captives as a bargaining chip and a threat against Turkey, the children of female Daesh members might become a threat for the whole region if they can’t be rehabilitated.

Why do they want to come to Turkey?

Individuals radicalized within the ranks of Daesh are practicing an incredibly specific set of rules that they claim as Islam, which is not only something the Muslim world has denounced but also the religious community as a whole. On Twitter, people have suggested that the primary reason is the religious freedom Turkey provides in the eyes of these women.

One such Ukrainian woman, identified as Elmaz Memetova, stated it would not be permitted for her to don the niqab in Russia, so living in Turkey would be more suitable for her. This assertion should be taken with caution as it was published by a PKK-allied news organization and there is a chance that the information was doctored. Based off of information gathered via fighters who have been permitted to return to their own states, Daesh seems to have been setting up sleeper cells toward the end of their reign. This is exceptionally important as it could indicate that the reason these women want to relocate to Turkey is their knowledge of such activities taking place. Twenty-two-year-old Mounsef al-Mkhayar, of Moroccan descent but who grew up in Italy, gave an account of the growing dissent among Daesh commanders and suggested men were being smuggled out of Syria in order to set up sleeper cells.

Local sources in Syria have also expressed growing fears regarding assassinations being carried out in order to clear the way for new cells. It is possible that these women, whom we do not have sufficient evidence to understand their roles in Daesh, could have prior knowledge regarding the locations of sleeper cells located in Turkey and wish to rebuild Daesh in the Middle East.

Another factor for Daesh members wanting to come to Turkey seems to be the reality that Turkey has the only functional justice system in the region where Daesh members can find a trial based on basic human rights, in contrast to Iraq where they might be executed and Syria which lacks any proper justice system like the “social contract” of the PKK leader Abdullah Öcalan.

Additionally, as seen in remarks by female members of Daesh, many prefer a prison sentence in their home countries over the living conditions in the camps of Syria. Lastly, many Daesh members might hope to reach out to the embassies of their home countries by smuggling themselves to Turkey, but many states don’t want to take their citizens back.

Turkey’s responsibilities (not) to take

Turkey is not responsible for the rehabilitation of these women, nor does it have the resources, as it is already expanded beyond its’ capabilities with the vast numbers of Syrian refugees it has taken in since the beginning of the Syrian war. It would be far more beneficial for security studies as a field of study for the countries to take back their radicalized citizens and understand how exactly Daesh was able to reach, recruit and radicalize them.

Since 2015, women have been taking on a more active role in fighting, which means Turkey would face an issue of having active fighters with possible access to weapons through contacts made during their time in Daesh. There are countless human traffickers, who have yet to be caught by the authorities due to lack of information, who have also been claimed to engage in weapons trafficking.

On the other side, within the Turkish protected zone in Syria, the Syrian society along with the Syrian opposition and Turkey’s support have established centers to rehabilitate Daesh members and supporters as well as civilians who were traumatized living under Daesh control. The centers have a special focus on rehabilitating children, and have achieved a certain amount of success. This model being implemented in a potential safe zone in northern Syria with the support of the international community might help ease the threat posed by Daesh members, supporters and civilians traumatized living under Daesh, and encourage Turkey and the Syrian civil society to take responsibilities.

The YPG and possible threats

It is equally possible that the YPG would be interested in using these once-imprisoned women as a weapon against Turkey. The International Center for the Study of Radicalization and Political Violence (ICSR) reports that there is a likelihood of stateless persons falling through the cracks, making it possible for a generation of people that no country has information on to come about. The YPG has already threatened to release Daesh prisoners, with the implication that they will be unable to control where they go to after their freedom has been granted. The obvious target in these threats is Turkey, as there will be immense pressure on the country at its borders and the European states from which many of these fighters originate are unwilling to take them back. The New York Times verified this claim, and reported that the YPG leadership is uncertain about the release because it will need all of its fighters ready for a possible incident with the Turkish Armed Forces (TSK). This is another indicator of the existing possibility that the YPG intends to use its prisoners against Turkey. The agreements being made in Syria between Daesh fighters and the YPG could permit Daesh to reorganize and rehabilitate itself in the region, effectively throwing away the hard work that has been done to eradicate them.

The U.S.’ strategic mistake to partner with the YPG might have resulted in things beyond the imagination of the time, such as Daesh members held together by the YPG in camps functioning as new variations of Camp Bucca, where Daesh basically was formed, when Abu Bakr al Baghdadi established his close relations to former senior Baath Party members.

The current situation poses a serious threat for the entire world and for Turkey. What will happen to the children of these Daesh members? Who can control where Daesh members will flee after paying the YPG to be smuggled into Turkey? What will happen if the YPG, who profited a lot from Daesh, decides to let Daesh members escape in order to achieve additional gains? Or how genuine is it to leave so many Daesh members in the hands of a nonstate armed group as a bargaining chip? All of these questions must be answered, and many other results will be seen in the foreseeable and in the non-foreseeable future. The U.S.’ decisions on how to fight Daesh, how to eliminate the last territory held by Daesh, and its decisions on how to deal with thousands of captives will shape the future of the Middle East. At least someday the children of Daesh members will grow up.