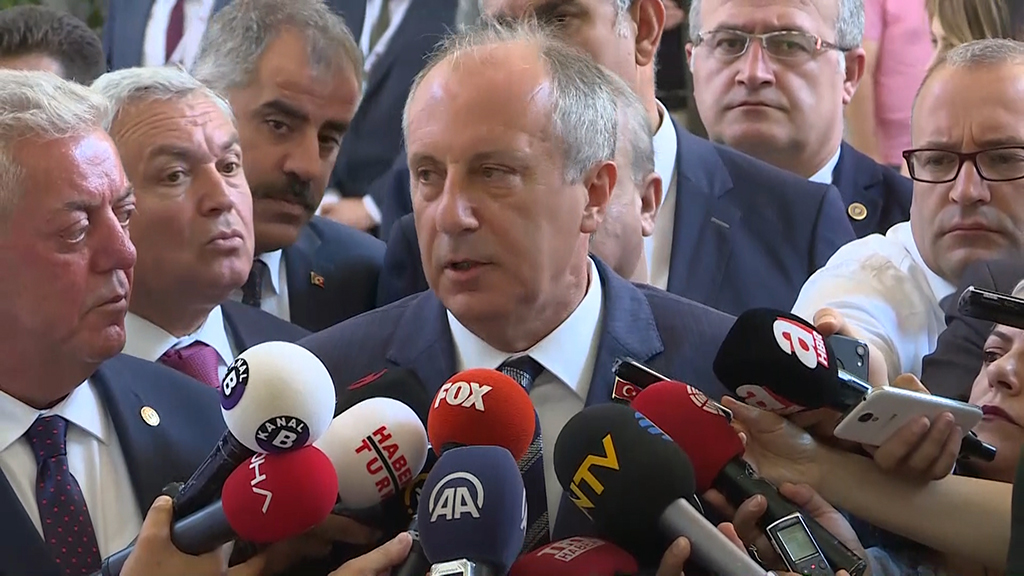 Turkey’s opposition remains unable to overcome the emotional trauma of President Recep Tayyip Erdoğan’s first-round victory in the June 24 presidential election. It seems that members of the Republican People’s Party (CHP) are experiencing more intense anger and sadness. As a matter of fact, the hype that surrounded the CHP’s final week on the campaign trail was the first sign of that severe trauma. Many opposition voters were encouraged by the crowds that gathered in Izmir and Istanbul to watch Muharrem İnce, the CHP’s presidential nominee, speak. Amid like-minded people, they chanted “revenge” to express their anger towards the AK Party – which İnce avoided at all costs. The conspiracy theories that surfaced on social media on the night of the election, likewise, were a natural outcome of those over-expectations.

Shortly afterwards, İnce became the target of collective anger, as he conceded and congratulated Erdoğan on his victory. But CHP chairman Kemal Kılıçdaroğlu dealt a death blow to the opposition’s hopes by refusing to gracefully step down and hand over the main opposition party’s leadership to İnce, who received more than 30 percent of the vote in the presidential race. In other words, the CHP chairman’s decision to double down created a new wave of hopelessness. Analyzing the reasons behind the deepening sense of despair in the CHP base is a valuable endeavor. The fact that the movement, which created the Republic itself, has been losing to the Justice and Development Party (AK Party) for 16 consecutive years has sociological implications. At this point, it is clear that the main opposition’s failure to beat Erdoğan causes a political and psychological trauma that makes them more introverted.

This trauma not only fuels an excessive sense of unhappiness among certain social groups but also prevents Turkey from making effective use of its human capital. There is no doubt that the hope of coming to power strengthens our political process and democracy. As such, there is but a single option available to the losers: to transform themselves in order to receive more popular support. They must update their platforms, leadership structures and ideologies in order to incessantly look for ways to connect with the people. Provided that even Erdoğan, the AK Party’s chairman, was compelled to acknowledge the receipt of the electorate’s message to his party, the CHP leadership has no choice.Obviously, there are many ways to account for the CHP’s failure to transform itself into something new.

The impossibility of leadership change, the establishment’s grip on the party organization, ideological rigidity and the emergence of a core constituency immediately come to mind. To be clear, all of those explanations would seem accurate. What many observers fail to acknowledge, however, is that the opposition’s intellectual elite fails to analyze the dynamics of Turkish politics accurately. Those who have were heartbroken by İnce’s ultimate failure have returned to their “communes” in an attempt to recover from loss and simply cannot understand how the Turkish president keeps winning. Needless to say, the Western media plays a crucial role in their failure to analyze Turkish politics. This is how the Western media hurts Turkey’s opposition.

Anti-Erdoğanism and the charge of authoritarianism, which Western reporters have been making since 2013, are to blame for the current situation. In recent years, Erdoğan’s supporters have been repeatedly accused of siding with authoritarianism and falling prey to his cult of personality. By contrast, the Turkish president’s opponents are hailed as vanguards of democracy. The June 24 elections were no exception. Claiming that Turkey was more divided than ever, Western media outlets have been filled with commentaries alleging that the Turkish electorate opted for authoritarianism. The German magazine Stern, for example, hailed Erdoğan’s opponents as “active democrats”: “[48 percent of Turkey] is a modern, efficient and liberal country that belongs to Europe as opposed to the Middle East. … This bright Turkey is currently showing the world how a civil society has been resisting and surviving for years. Many people make sacrifices for this purpose. They are active democrats – not passive [democrats] like most Europeans.”

Let us ignore the implicit Orientalism and the “white man’s burden” thinking of those comments. Perhaps Turkey’s opponents experience a sense of moral superiority upon reading this tale of two Turkeys. This twisted analysis, however, unwittingly fuels pessimism among opposition voters that could make them passive. This poisonous fruit that comes from the tree of the Western media only serves to kill their hopes. At this rate, the people who simply cannot accept the democratic will of the Turkish people will never recover from their trauma.

Apparent reasons behind Erdoğan's victory in the elections
Next
Loading...
Loading...
We use cookies to ensure that we give you the best experience on our website. If you continue to use this site we will assume that you are happy with it.Ok