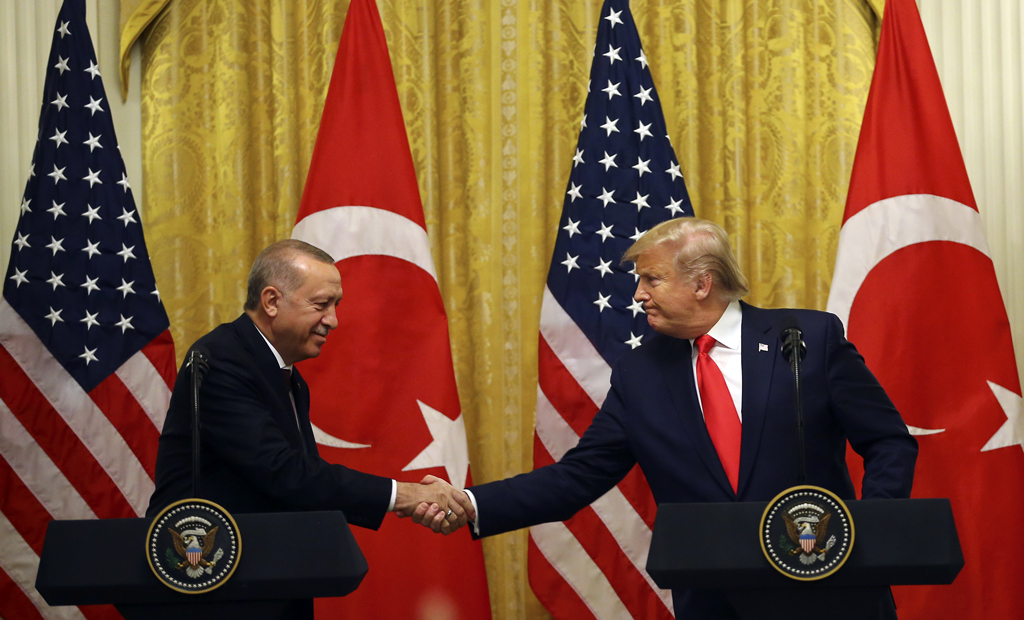 Highlights of the Erdoğan-Trump meeting

President Recep Tayyip Erdoğan's meeting with U.S. President Donald Trump went exactly as expected. It was a very successful meeting in symbolic terms, allowing the two countries to reaffirm their commitment to working together, mend their strained relationship and keep negotiating. Turkish and U.S. officials found an opportunity to listen to each other at length.

President Recep Tayyip Erdoğan’s meeting with U.S. President Donald Trump went exactly as expected. It was a very successful meeting in symbolic terms, allowing the two countries to reaffirm their commitment to working together, mend their strained relationship and keep negotiating. Turkish and U.S. officials found an opportunity to listen to each other at length.

Against all odds, Turkey’s relations with the United States seem to be back on track thanks to Erdoğan and Trump’s efforts. Both the Turkish opposition, which urged the Turkish president to cancel his visit, and anti-Turkey circles in Washington, who told Erdoğan not to come, ended up losing. The two leaders established yet again that they do not care about such efforts. The visit’s symbolic aspects – Trump’s compliments, the leaders’ body language, the security measures, the meeting’s duration, the participants and the press conference – demonstrated the importance that Trump attaches to his relationship with Erdoğan.

By inviting a group of U.S. senators to his meeting with the Turkish president, Trump gave Erdoğan an opportunity to communicate directly with U.S. Congress. Erdoğan’s straightforwardness does not seem to disturb Trump. It was also important for U.S. senators and bureaucrats to witness Turkey’s determination firsthand. A video about People’s Protection Units (YPG) ringleader Ferhat Abdi Şahin, code-named Mazloum Kobani, must have unsettled an audience whose perspective has been crafted by U.S. Central Command (CENTCOM). Nor would it surprise anyone for the same people to ignore an official CIA document that the Turks shared at the meeting.

They did, however, witness Erdoğan’s commitment to fighting the PKK’s Syrian affiliate, the YPG. It is unlikely that Ankara will get Trump and/or Congress where it wants on the YPG. Having invested heavily into the group, the United States will protect its proxy for a little more. Yet, Turkey expects Washington to be more careful with the optics – including no direct communication between the U.S. president and the YPG ringleader. Still, Sen. Lindsey Graham’s move to block a genocide bill demonstrated the meeting’s real impact.

Erdoğan’s lengthy remarks at his joint press conference with Trump did more than just ease tensions in Washington. The Turkish president also shared his country’s perspective on genocide allegations, Operation Peace Spring, Daesh, the YPG and the Gülenist Terror Group (FETÖ) with a global audience. In addition to offering to establish a safe zone in northern Syria, he highlighted the West’s contradictions on counterterrorism and refugees.

Erdoğan’s statement reminded everyone that Turkey remains a prominent player in the international arena. At the same time, the Turkish leader shared Ankara’s frustration with the asymmetrical nature of its relationship with Washington within the limits of diplomatic courtesy. By returning Trump’s indelicate letter and telling the U.S. president in front of TV cameras that he was wrong to directly communicate with a known terrorist, Erdoğan demonstrated the current state of bilateral relations.

So here’s where the Turkey-U.S. relationship stands at this time:

Ankara, in turn, views Washington’s push to take the S-400 off the table as a violation of its sovereignty. It does not wish to disrupt its strategic partnership with Moscow. Turkish and U.S. delegations will hold talks to address the question of compatibility between the F-35 jets and the S-400 system. NATO will be asked to coordinate that exchange. Thanks to Erdoğan’s visit, Turkey won precious time to sell Washington on the new realities surrounding the S-400 air defense system.

The next round of talks will take place at the NATO Leaders Meeting next month. There, Erdoğan will deliver strong messages to Western governments on counterterrorism, the safe zone and refugees.

The obvious outcomes of the Erdoğan-Trump meeting
Next
Loading...
Loading...
We use cookies to ensure that we give you the best experience on our website. If you continue to use this site we will assume that you are happy with it.Ok