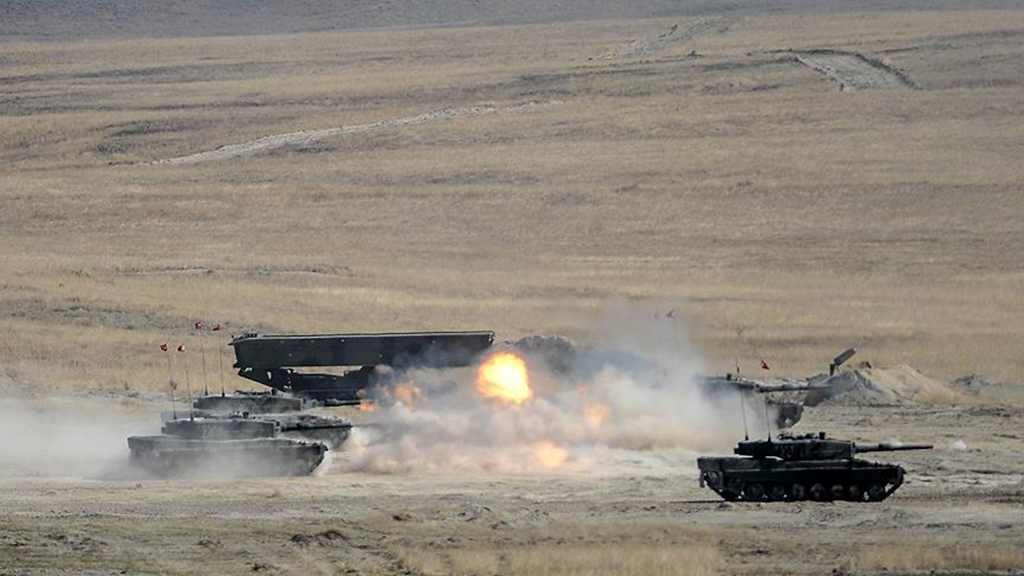 Footsteps towards a new equilibrium in Syria?

If anybody thought that Daesh's defeat would lead to de-escalation in Syria, they must be seriously disappointed..

If anybody thought that Daesh’s defeat would lead to de-escalation in Syria, they must be seriously disappointed. Neither the armed clashes on the ground nor the negotiations are likely to end anytime soon. The large chunk of territory under the People’s Protection Units (YPG) control and Iran’s strong presence in Syria fuel the conflict today.

To be clear, all parties know full and well that the current situation is unsustainable. Every passing day, the main stakeholders – Russia, the United States, Iran and Turkey – issue threats or warnings against each other. For example, Washington has recently threatened the Assad regime and its sponsors, Russia and Iran, citing the use of chemical weapons in Eastern Ghouta. Again, the U.S. National Security Strategy clearly identifies Iran as an enemy. In recent days, Ali Akbar Velayati, a senior adviser to Iranian Supreme Leader Ayatollah Ali Khamanei, claimed that the United States would fail in Syria as it did in Iraq and threatened to kick out U.S. troops from east of the Euphrates River if Washington did not voluntarily withdraw. Meanwhile, against the backdrop of Turkey’s calls on U.S. troops to withdraw from Manbij, U.S. Central Command (CENTCOM) commanders stated that they would fight back if their forces came under attack. Those threats aren’t just words either. They translate into concrete steps on the ground.

Meanwhile, Turkish forces and the Free Syrian Army continue to advance towards the heart of Afrin. Until today, more than 1,000 terrorists have been killed. Again, news of violent clashes came from Deir ez-Zor as Russia and the Assad regime continued their attacks against Idlib and Eastern Ghouta. The United States struck regime forces that assaulted YPG militants in the area. The fact that nearly 100 regime troops and militia members have been killed shows the seriousness of Washington’s message and suggests that the U.S. will have to increase its military footprint in Syria if it seeks to continue protecting the YPG militants and remain in Syria. Provided that U.S. Congress is unlikely to approve that plan, the White House has little choice but to rely on diplomacy. After all, Turkey, Russia and Iran have been able to cooperate in Syria despite challenges. Their leaders have repeatedly set aside their differences of opinion to get together and take joint steps. President Recep Tayyip Erdoğan, Russian President Vladimir Putin and Iranian President Hassan Rouhani, who met in Sochi last November, will get together again in Istanbul soon. The cooperation between the three countries compels Washington to develop a new policy in order to stay relevant in Syria.

At this time, the Americans are playing defense on the ground and at the negotiating table, and remain isolated. Washington’s misguided and shortsighted YPG policy resulted in the alienation of its NATO ally, Turkey, which urges that the militants withdraw from Manbij and pledges to remove the YPG militants from their strongholds in the east of the Euphrates River. It is no secret that Russia, Iran and the Assad regime will turn against the American-backed YPG militants once a new balance of power emerges in Idlib. In light of those developments, the U.S. must make some strategic decisions regarding its Syria policy. Otherwise, the Americans will have to keep playing defense. Needless to say, Turkey remains the most likely partner for the United States in Syria. The decision by U.S. National Security Adviser Gen. H.R. McMaster and U.S. Secretary of State Rex Tillerson to visit Turkey at this crucial time attests to that fact. However, it is unclear how American policymakers will respond to the prospect of cooperating with the Turks in Syria. If the Americans resort to the old “carrot and stick” method during negotiations over the YPG’s fate to address other bilateral problems, they would inflict irreparable damage to Turkey’s trust. Having refused to take action against Fetullah Gülen and the Gülenist Terror Group (FETÖ) and further alienating the Turks with a show trial in New York, Washington would make a big mistake if it threatens sanctions instead of making offers.

Washington’s Syria policy came with such a heavy price tag for Turkey that the threat of causing new problems over Ankara’s partnership with Moscow and Tehran would be the feather that breaks the camel’s back. In that case, Turkey will continue its dialogue and cooperation with Russia and Iran, as the U.S. becomes more and more isolated in Syria.

Going forward, U.S. diplomats visiting Ankara to sell the Turks on the policy to contain Iran will need some good stories to tell. After all, a new equilibrium is emerging in Syria. Whether the U.S. will become further marginalized or engage in a new round of negotiations is up to them.

What is new in Turkish-US ties before Tillerson's Ankara visit?
Next
Loading...
Loading...
We use cookies to ensure that we give you the best experience on our website. If you continue to use this site we will assume that you are happy with it.Ok