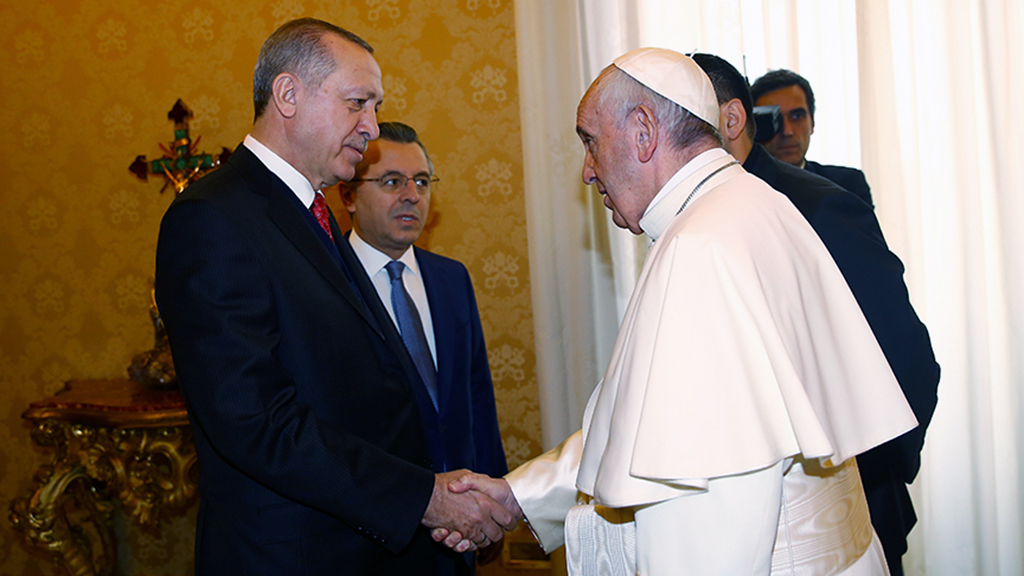 Erdoğan’s visit with Pope Francis and an alliance of civilizations

As the political and social atmosphere in the international system is rapidly evolving in favor of discriminatory figures, the warm meeting between Erdoğan and the pope was extremely valuable

This week, President Recep Tayyip Erdoğan paid a historic and eagerly anticipated visit to the Vatican to meet with Pope Francis, the spiritual leader of the Catholic world. This official visit was crucial for several aspects. Most importantly, it was the first official visit by a Turkish president to the Vatican in 59 years since the visit by Celal Bayar. Diplomatic relations between Ankara and the Vatican were formed as early as 1960, and diplomatic missions were opened reciprocally. Second, and more importantly, Erdoğan went to the Vatican as the chairman of the summit of the Organisation of Islamic Cooperation (OIC), representing 57 Muslim countries around the globe. Erdoğan has had previous contacts with the pope to strengthen peaceful coexistence and intercultural dialogue as the co-chair of the United Nations Alliance of Civilizations (UNAOC) initiative. This visit brought them to a climax in the light of his contemporaneous positions at the OIC and the UNAOC.

As the general political and social atmosphere in the international system is rapidly evolving in favor of movements and leaders favoring radical nationalism, ethno-sectarian discrimination, anti-Muslim extremism and far-right ideologies, high-level dialogue between representatives of different civilizational identities is extremely valuable. Moreover, the kind of unilateral decision-making style that crystallized in the U.S. under President Donald Trump continues to disregard cultural and religious sensitivities in the context of a number of critical issues such as the status of Jerusalem. Alleviating potential hazards of such unilateralism also necessitates increased collaboration among statesmen and social and spiritual leaders defending a virtuous approach to sensitive intermediation and conflict resolution.

In this spirit, Erdogan and Francis discussed ways to alleviate humanitarian disasters in Myanmar and Syria in their meeting. But the main issue dominating the agenda was the recent international crisis that unfolded due to Israel’s claim on Jerusalem as its capital and the firm support given by the U.S. by saying it will move its embassy there. This move, which clearly contradicted previous U.N. resolutions and established international norms, was widely perceived as a potentially destabilizing step that could trigger inter-religious and inter-cultural polarization around the world.

Given the moral weight of the papacy as the spiritual center of over 1 billion Catholics around the globe as well as a respected religious institution by other faith groups, it was vitally important that Pope Francis immediately opposed the U.S. declaration that recognized Jerusalem as the capital of Israel. The pope stressed that the holy city of Jerusalem is blessed for Jews, Muslims and Christians and, as such, its international status that was determined by U.N. Security Council resolutions must be respected. Erdoğan, as the chairman of the OIC Summit, had also called the pope previously and shared his appreciation for the principled stance he took Jerusalem. It is very important to have strong voices from the Western world that oppose American unilateralism and convey the message that peaceful coexistence is still possible in multicultural societies.

For its part, Turkey has been a strong advocate of intercultural dialogue for decades and sponsored international efforts such as the UNAOC initiative so as to contribute to global peace and stability. Erdoğan has appreciated the value of opening institutionalized channels of communication between different cultures and societies from very early on and established the UNAOC initiative in 2005 as prime minister, along with then Spanish Prime Minister Jose Luis Rodriguez Zapatero. A high-level group of experts was commissioned by Kofi Annan to explore the roots of polarization between different societies and cultures and a practical program of action was produced to address it. The UNAOC initiative became very influential for over a decade, organizing global events to build bridges between different cultures and civilizations through increased political, economic, social and cultural dialogue.

Yet the global economic crisis shattered established economic balances and threatened average welfare levels in the Western world. The refugee issue triggered by incessant wars in the Middle East, along with economic difficulties, fueled anti-migrant and far-right political movements both in Europe and the U.S. Intercultural dialogue and alliance of civilizations became increasingly difficult ideas to defend in public, illustrated by a decline in high-level participation in UNAOC meetings. In this bleak global context, it is extremely valuable that Turkey is spearheading the agenda on intercultural dialogue and cooperation on the basis of mutual respect and fundamental human freedoms as the leader of the OIC Summit. The world desperately needs virtuous voices that defend peace, justice and respect for others.

The Vatican and beyond: Europe's new political issues and Turkey
Previous

U.S.'s new YPG move
Next
Loading...
Loading...
We use cookies to ensure that we give you the best experience on our website. If you continue to use this site we will assume that you are happy with it.Ok