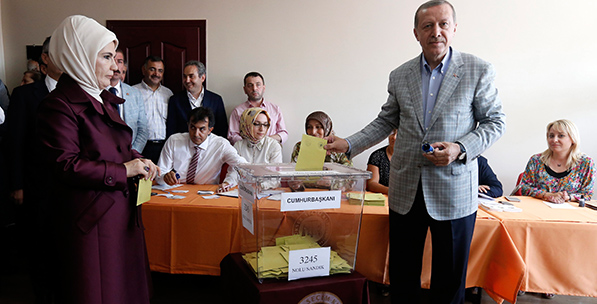 Erdogans presidential victory highlights that despite Turkeys polarisation over the Kemalist era's legacy  the vast majority see him as the best route towards a modern, prosperous society.

Turkey’s recent history and the change it is undergoing today cannot be adequately understood without a comprehensive understanding of who exactly incoming president Recep Tayyip Erdogan is and what he means for Turkey.

To understand “what” Erdogan is, it is necessary to understand “who” he is. This observation rings particularly true for outsiders trying to analyze the country.

The decline and dissolution of the Ottoman Empire, the retreat from North Africa, the Balkans and the Caucasia, the masses finding refuge in Anatolia once again, the wars, the devastating defeats, the Republic experience, Turkish modernisation and the secularist tutelage regime. These are only some of the topics of which one needs to have at least some idea in order to understand Turkey without falling into a trap of anachronistic analysis.

Any analysis that does not consider this centuries-old historical background and continuity will be seriously flawed. Turkish identity today rests on the social imaginings that began with the Seljuks, continued with the Ottomans and were later shaped by the particularities of Anatolian culture for centuries. Despite all the damage done to it by the secularist republic in the name of Westernization, the Anatolian-Islamist spirit is still here.

In the 1990s, or even the beginning of the 2000s, no one would take seriously the claim that this spirit would be still be tangible in Turkey in 2014. However, they weren’t to know that this country would experience a silent revolution.

Almost all Turks, whether they supported or opposed it, admit that was has happened is nothing short of a revolution. Those who opposed this silent revolution blame Erdogan for undoing the Republican reforms put in place in the 1920s and 30s. Those who support it, praise Erdogan for giving back everything they had thought they lost during the Kemalist era. Thus there are two camps that do not agree on much. As long as one pole focuses on losses and the other on gains, this situation will not change any time soon.

More than half of the population actively votes for Erdogan. This is a significant ratio for a country that is polarised and divided into many different factions. This is not all. A moderate estimate would state that 70% of Turkey’s population is conservative. This number rises to the mid-seventies when opposition to radical secularism is taken into account.

Given these demographics, it is perhaps unsurprising that support for Erdogan – even support that does not translate into actual votes – hovers around 60%. Not unlike the 58% who voted for Erdogan in the 2010 constitutional referendum which turned into an existential crisis for the Kemalists. Erdogan, in every sense of the word, represents a father figure for that potential 60%.

He is a genuine leader. You can find many Erdogan figures in the corner coffee house. This rises to hundreds of thousands in public events, demonstrations, even millions in moments of crisis.

Erdogan is blamed for inciting nationalism. However, Erdogan is the first Turkish leader who has not only touched on the most sensitive nationalist issue in Turkey – the Kurdish question – He has also initiated a resolution process and after many years guns are silenced.

Erdogan is accused of intolerance. However, he is the first leader to have resolved problems minorities had been experiencing and to have apologised for the Armenian deaths in 1915. This list goes on.

A different figure of Erdogan emerges depending on your perspective, which, of course, is perfectly understandable. Turkey is a country that is going through pains of normalisation. The half-century long journey of the periphery towards the center was completed (to a great extent), in 2010. This journey, which had began after the establishment of the Kemalist Republic has been arduous. The attempts to create roadblocks in the periphery’s path to the center only succeeded creating huge national crises.

President Erdoğan's Mission
Next
Loading...
Loading...
We use cookies to ensure that we give you the best experience on our website. If you continue to use this site we will assume that you are happy with it.Ok