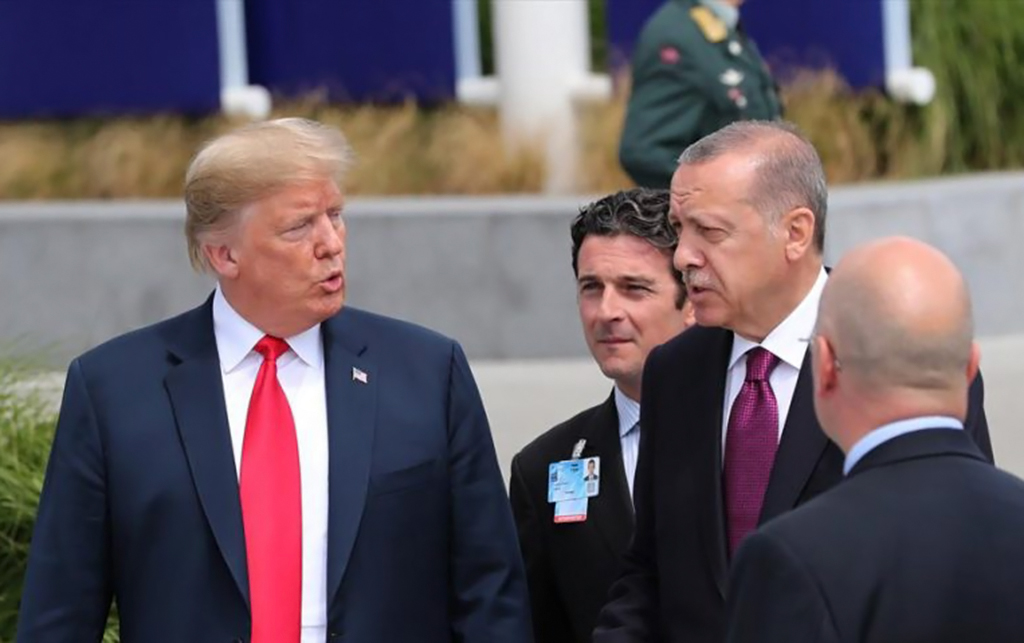 Erdoğan or Trump: Who deserves to be disappointed?

The strained atmosphere between Turkey and the U.S. is not likely to change until Trump stops being a bully

U.S. President Donald Trump said his Turkish counterpart President Recep Tayyip Erdoğan has personally let him down by refusing to release American pastor Andrew Brunson. His remarks represent a new level of escalation between Turkey and the United States. It would appear that the crisis will affect bilateral relations more deeply ahead of the U.S. midterm elections in November. In the past, Trump targeted Turkey on Twitter and resorted to sanctions, but the administration was careful not to turn the issue into a problem between the two leaders. Hosting a group of evangelical leaders at the White House last week, the U.S. president said that he was “fighting” for Brunson. More recently, in an interview with Bloomberg News, he discussed his personal relationship with Erdoğan, “I’m disappointed in him. I got somebody back for him. I’m very disappointed in him, but we’ll see how it all works out.”

It seems Trump continues to associate the Turkish request for his assistance to secure the release of Ebru Özkan from an Israeli prison with Brunson’s legal troubles in Turkey and maintains that the Turkish president has failed to keep his end of the bargain. Although Turkish officials deny that they agreed to such an arrangement, Trump keeps digging in his heels.

In the wake of Trump’s victory in the 2016 presidential election, Erdoğan looked for ways to work with his newly elected U.S. counterpart despite the poor state of bilateral relations. The Turkish leader appreciated the significance of Trump’s fight against the Washington establishment. As such, Erdoğan had hoped to address pressing problems through leader-to-leader diplomacy. Despite the fact that the U.S. remained unwilling to address the problems left behind by Trump’s predecessor Barack Obama, with the exception of the situation in Manbij, Erdoğan continued to nurture his relationship with the current U.S. president. Trump has not been able to change U.S. policy on the Gülenist Terror Group (FETÖ) or the military support of the PKK’s Syrian branch, the People’s Protection Units (YPG), in northern Syria. As a matter of fact, Washington has continued to deliver thousands of truckloads of weapons to YPG militants despite Trump’s personal promise to cut off the group. Same goes for the Halkbank sanctions and charges brought against Mehmet Hakan Atilla, a former Halkbank executive. To make matters worse, the U.S. moved to block the delivery of F-35 fighter jets to Turkey, sanctioned two Turkish ministers, levied tariffs on Turkish steel and aluminum and launched an assault on the Turkish lira.

Now Trump says he is disappointed in the Turkish leader because he asked for Brunson’s release six times with no success. He thinks that it was enough for him to congratulate Erdoğan on his 2017 referendum victory, agree to a road map for the YPG’s withdrawal from Manbij and say some nice things about the Turkish president every once in a while. Sadly though, the U.S. president has completely disregarded a number of chronic problems and has mounted pressure on the Turkish government in an attempt to score political points from the Brunson episode. Whereas the Obama administration tended to engage in indirect action against Turkey, Trump challenges and sanctions Turks openly. It is unclear whether the final part of his statement to Bloomberg News was intended as an olive branch or a new threat.

Speaking of disappointment, one cannot help but think back to Obama’s 2016 interview with The Atlantic’s Jeffrey Goldberg. He was disappointed in the Turkish president, Obama said, whom he described as “a failure and an authoritarian … who refuses to use his enormous army to bring stability to Syria.” Needless to say, the Obama administration disappointed Erdoğan in many ways, including its policies on FETÖ and the YPG, which put Turkey’s national security at risk.

Nowadays, the relationship between Trump and Erdoğan is going through a serious test. It is important to note that the Turkish president seems more careful and patient in his efforts to respect his counterpart. Nonetheless, Erdoğan has not refrained from speaking his mind on certain issues, whether Trump liked it or not. The most obvious case in point was their disagreement over Jerusalem when the Trump administration made a potentially destabilizing decision to recognize the city as the capital of Israel. Erdoğan was the most vocal critic of the move and proceeded to mobilize the U.N. General Assembly to isolate the United States.

It was Trump, however, who escalated tensions at the leadership level over Brunson’s arrest in Turkey. Notwithstanding Erdoğan’s patience and good will, Trump’s approach reflected Washington’s asymmetrical and vulgar notion of alliance. For some reason, the U.S. president seems to take the small favors he offered Erdoğan too seriously. He conveniently ignores his administration’s misguided policy choices, which alienated Turks. Likewise, it was Trump who disposed the leverage of leader-to-leader diplomacy in bilateral relations and paved the way to a war of words.

The perfect storm between Turkey and the United States won’t end until Washington abandons its unilateral and selfish position.

Turkey-US alliance should not be 'black and white'
Previous