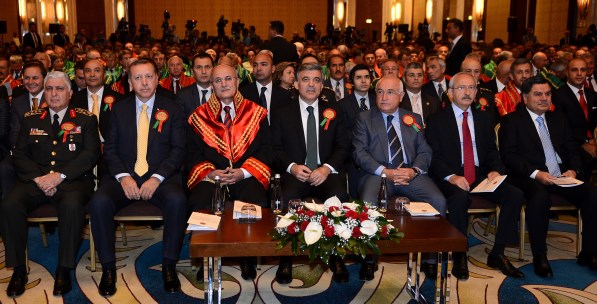 Democratization and the Constitution in Turkey

The biggest obstacle that stands before Turkeys democratization efforts today is nothing but the 1980 constitution, which was drafted based on the founding ideology after the coup.

If we can take the transition to the multi-party system as a turning point, Turkey’s painful story of democratization has been going on for more than half a century now. Turkey has been going through democratization since 1950. That is to say, modern Turkey, which emerged with the fall of the Ottoman Empire, is still struggling with its political and social traumas. Having lived through some of the worst traumas a secular republic throughout the 20th century, Turkey is still trying to normalize. The problems Turkey faced, caused by the foreign nature of the founding ideology to these soils, have also metamorphosed. The people tried to resist the secularist state ideology’s project of creating “model citizens” through various defense mechanisms. They did not hesitate to vote, at any election, for any party that distanced itself, even ever so slightly, from the founding ideology.

After the 1980 coup, the tutelage regime believed that the system was purged of all those who were discontent with the founding ideology. The people proved the tutelage regime wrong when they voted for Özal, who they perceived to be different than the secularist elite. During the same years, Islamism and nationalism became rising trends. The Islamist movement, with its inclusive approach, began to overtake the right wing political movement as well. Of course, the Islamist movement itself underwent serious transformation. Demonized by the secularist state, the Islamist movement developed as an identity against the system and put an end to the half a century long hegemony of the right wing parties in Turkey. This ‘anti-systemic’ movement, with the AK Party in power, confronted the tutelage regime unlike the right wing political parties in Turkey. It stood strong against the tutelage regime’s tools of oppression such as the military, judiciary and bureaucracy. The people’s support carried the AK party to victory in every election it entered. At the end, Turkey was able to go through a process of democratization that had not been possible in the last century.

The biggest obstacle that stands before Turkey’s democratization efforts today is nothing but the 1980 constitution, which was drafted based on the founding ideology after the coup. Unless the anti-democratic articles that regulate state-military, state-religion, and state-citizen relations are removed from the constitution, structural transformation will not be possible. The democratization process, which is now carried through by Erdoğan’s willingness to bear the risk personally, can only last for so long. In fact, what Erdoğan can do also runs into the obstacle of the constitution. Erdoğan’s party does not hold enough power in the Parliament to amend the constitution single handedly.

The Fall of Ikhwan and the Future of Ennahda
Previous