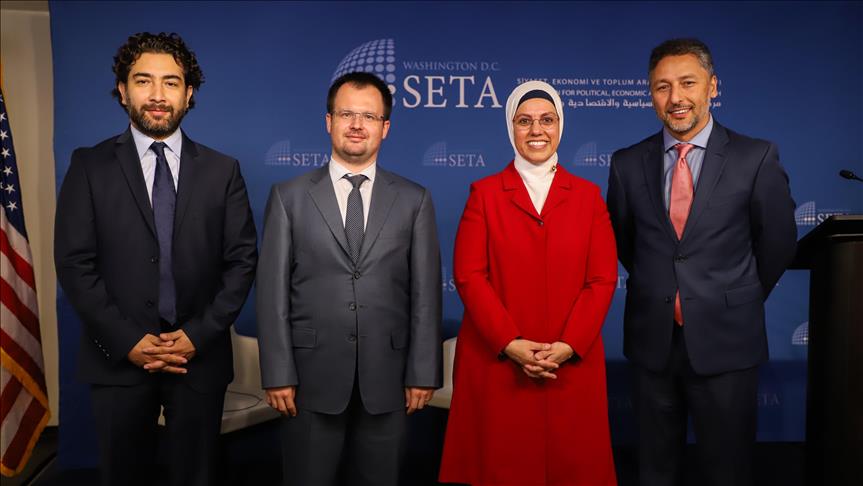 Coup attempt was a lesson for Turkey and no group will be able to repeat it, says vice-chair of Turkey's ruling party

July 15 was a day when the people of Turkey stood up for democracy and their country, a senior Turkish lawmaker said Monday.

Speaking at a panel organized by the Washington-based think tank SETA on the 2016 defeated coup attempt orchestrated by the Fetullah Terrorist Organization (FETO), Ravza Kavakci Kan, vice-chair of Turkey’s ruling Justice and Development Party (AKP), said on the night when the putschists attempted to overthrow the democratically elected government, people took to the streets to stand up for democracy even before the announcement came from President Recep Tayyip Erdogan.

Kan noted that a review commission was established for those who were dismissed from their jobs following the coup attempt, adding only two percent of the cases were wrongly decided by the commission.

“The July 15 coup attempt was a lesson learned the hard way for Turkey, but it will not be possible for any other group to do the same thing in the future,” she added.

Akturk, who was the other speaker, emphasized that the state of Turkey faced two “totalitarian assaults” around the same time when the PKK terrorist organization ended its ceasefire and the coup attempt took place in July 2016.

“Both of these events posed similar existential threats to Turkey’s democracy,” he said. “Both the PKK and FETO exploited grievances in Turkish society that were being increasingly addressed by the Turkish state.”

Evaluating military-civilian relations between Turkey and the U.S., Perry and Erickson also shared their impressions on the Turkish army.

The defeated coup of July 2016, orchestrated by FETO and its U.S.-based leader, Fetullah Gulen, left 251 people martyred and nearly 2,200 injured.

Since the coup attempt, Turkey has sought Gulen’s extradition from the U.S. and has complained that the U.S. is not moving fast enough.

Ankara also accuses FETO of being behind a long-running campaign to overthrow the state through the infiltration of Turkish institutions, particularly the military, police and judiciary.

FETO also has a considerable presence outside Turkey, including at private educational institutions that serve as a revenue stream for the terrorist group, including in the U.S.

Trump-Putin summit in Helsinki changes nothing
Next
Loading...
Loading...
We use cookies to ensure that we give you the best experience on our website. If you continue to use this site we will assume that you are happy with it.Ok