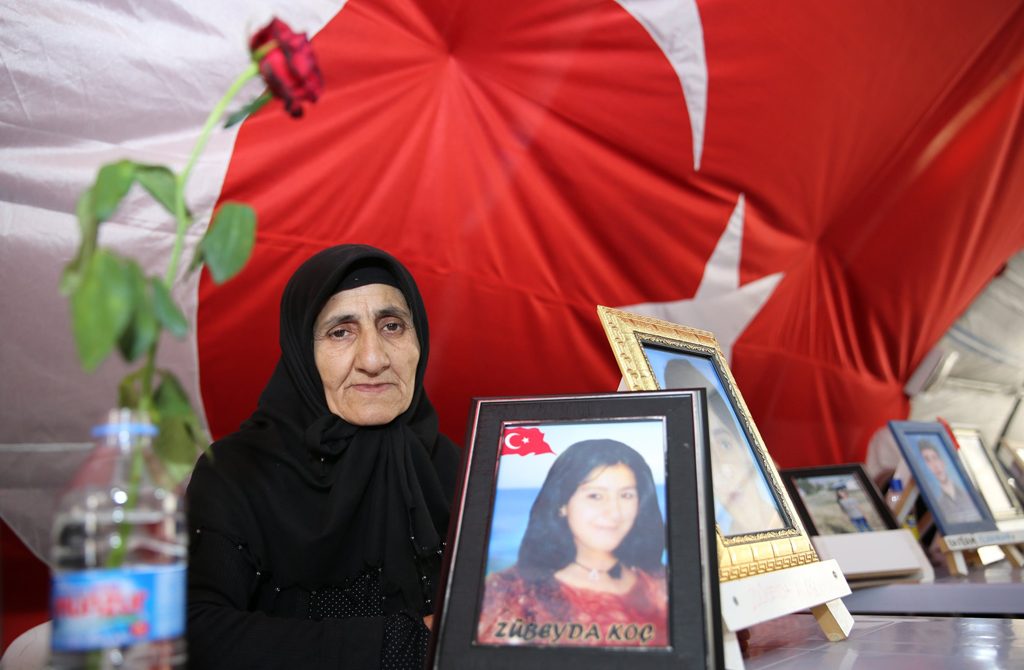 A mother whose child was abducted by the PKK terrorist group stages a sit-in protest in front of the pro-PKK Peoples' Democratic Party's (HDP) provincial office in southeastern Diyarbakır, Turkey, July 13, 2022. (AA Photo)

Can they dare for a new ‘Kurdish opening’?

Türkiye’s political parties will ostensibly fight over the Kurdish vote bank in the 2023 election campaign. That competition has already fueled rumors about a new “opening,” yet it remains unclear whether that will lead to concrete and comprehensive policy proposals.

Türkiye’s political parties will ostensibly fight over the Kurdish vote bank in the 2023 election campaign. That competition has already fueled rumors about a new “opening,” yet it remains unclear whether that will lead to concrete and comprehensive policy proposals.

Those who want the opposition’s “table for six” and the Peoples’ Democratic Party (HDP) to stick together talk about “making amends” and a “Kurdish opening” to encourage the opposition, starting with the main opposition Republican People’s Party (CHP). It goes without saying that the opposition could give the ruling Justice and Development Party (AK Party) room to maneuver by going down that path. Obviously, an abstract discussion would not satisfy the HDP as its pan-Kurdish nationalist demands are radical enough to turn over the “table for six.”

Another interesting point is that HDP’s former chairperson, Selahattin Demirtaş, who bears responsibility for derailing the “reconciliation process” that started in 2013 and has remained behind bars, started the latest “opening” debate. For the record, it makes sense for Demirtaş and the HDP to call on their base to “engage in some self-criticism” and to argue that “we must open up to Türkiye if we want other opposition (parties) to make a Kurdish opening.” After all, they expect the “table for six” to engage with the HDP directly and break that party’s isolation – which would enable them to mobilize support against the backdrop of a pending closure case and to exercise some power if the opposition were to win the 2023 elections.

That statement by Demirtaş sparked excitement among some liberals. Recalling that the HDP had appointed some liberals to its advisory board, they started mulling over “the Türkiye opening.” Also, noting the former HDP chairperson’s admission that “politics and violence cannot co-exist” and call to “look for a solution within Türkiye’s integrity,” they described Demirtaş’s statement as an “opportunity.”

We are all too familiar with the liberal strategic mindset’s weakness for polished statements and boundless romanticism. Politics, however, is not a discoursive competition. Moreover, multiple cases of ethnonationalism from around the world taught us that liberal romanticism cannot address Türkiye’s multidimensional Kurdish question.

One doesn’t need to think hard about how HDP members sabotaged two “openings” in 2009 and 2013. Or has everyone forgotten that the HDP circles, who unleashed violence on Turkish soil to defend the so-called Rojava revolution in northern Syria, could not even describe the PKK as a terrorist entity? Has anyone erased the memory of those folks who urged people to take to the streets in 2014 or endorsed the “trench” campaign in Türkiye’s southeastern provinces in 2015? Am I to believe that we no longer remember some leftist intellectuals praising the “liberating side of violence” around that time?

Does it make sense to buy into the half-baked remarks on “the Türkiye opening” by some, who have not even admitted their mistakes, while the AK Party government, which carried out a “silent revolution” by implementing key reforms regarding the Kurdish question and made two attempts to end the violence, remains in power?

Is it even remotely possible for the HDP, which cannot even relate to the mothers of Diyarbakır, to distance itself from the PKK terrorists? Are we supposed to believe that the HDP will abandon pan-Kurdish politics while the United States backs the PKK/YPG and the PKK presence persists in Syria and Iraq – just because that party appointed a handful of liberals to its advisory board?

The negative sentiment that these questions reflect does not necessarily mean that I do not hope that the Kurdish nationalists in Türkiye will change some day. We cannot disregard, however, that HDP’s most recent statements on “peace” and “opening” are merely intended to alleviate the pressure and break their isolation. Nor can we ignore HDP’s anti-Turkish performance in recent years because some liberals have romantic dreams.

It would be a serious mistake for the opposition to alleviate the democratic pressure on the HDP in the name of some “opening.” There is no reason to think that it is likely for the “table for six” to launch a comprehensive Kurdish opening ahead of next year’s election that could meet the HDP’s demands. Indeed, any attempt to take such steps would create fresh opportunities for the People’s Alliance in politics and discourse.

Here’s a potentially helpful reminder: Across from the “table for six” is President Recep Tayyip Erdoğan, who made every attempt to answer the Kurdish question and has been in power for two decades.

4 discrepancies in ‘table for six’ in Türkiye
Previous

Biden's visit to Middle East offers no new strategy
Next
Loading...
Loading...
We use cookies to ensure that we give you the best experience on our website. If you continue to use this site we will assume that you are happy with it.Ok