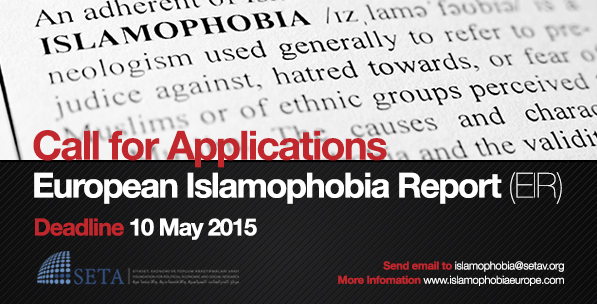 EIR will be authored by leading experts in the field of Islamophobia Studies and/or NGO-activists committed to the documentation of racism in respective nation states.

The aim of the yearly ‘European Islamophobia Report’ (EIR) is to document and analyze trends in the spread of Islamophobia in various European nation states. Every year at the beginning of February before the International Day for the Elimination of Racial Discrimination (21 March), reports will be published online and hardcopy and disseminated among leading stakeholders, politicians, NGO’s, and anti-racist organizations.

EIR will be authored by leading experts in the field of Islamophobia Studies and/or NGO-activists committed to the documentation of racism in respective nation states. One person will author one report of his/her country of expertise. These reports will be also published online to be easily accessible. The full report will also be translated into Turkish. The executive office will disseminate the reports among key policy makers, journalists and NGO activists from the local, national and European level. A recommended structure for a national report is to contain the following chapters:

It is recommended to collect information via (critically) analyzing media reports, contacting offices and NGO’s who combat discrimination, doing expert interviews with leading scholars and policy makers in the field.

Dissemination: Reports will be accessible online via an extra web-page for the project. In addition, all reports will be translated into Turkish and published online and in print.

Uighurs as the Invisible Victims of the International System
Previous

Dominating Asia: AIIB and the US-Chinese Economic Battle
Next
Loading...
Loading...
We use cookies to ensure that we give you the best experience on our website. If you continue to use this site we will assume that you are happy with it.Ok