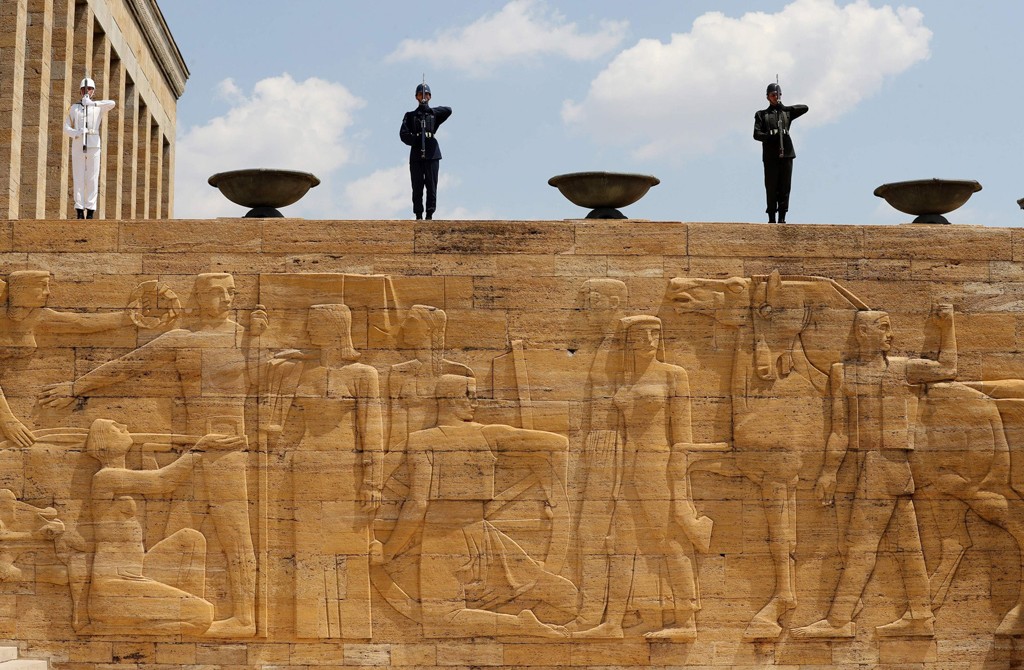 Turkey’s main opposition, the Republican People’s Party (CHP), has become embroiled in internal strife over the distinction between 'Mustafa Kemal' and 'Atatürk', in reference to the founder and first president of the Republic of Turkey, Mustafa Kemal Atatürk.

Turkey’s main opposition, the Republican People’s Party (CHP), has become embroiled in internal strife over the distinction between “Mustafa Kemal” and “Atatürk,” in reference to the founder and first president of the Republic of Turkey, Mustafa Kemal Atatürk.

For the record, the fight has nothing to do with governmental attempts to weaken the Nation Alliance formed by allied opposition parties, or any outside discussion over the CHP’s leadership, but is rather a debate that the party has worked hard to sweep under the rug, beginning when several senior CHP figures reacted against CHP Istanbul Chair Canan Kaftancıoğlu’s refusal to refer to the republic’s founder as “Atatürk.”

Recently, Muharrem Ince, who ran for president on a CHP ticket in 2018, accused Kaftancıoğlu of “something beyond ignorance” over her decision. The local politician’s insistence on using the founding father’s given names (in lieu of his later self-declared surname) has obviously nothing to do with ignorance.

Despite mounting criticism, the ever-controversial Kaftancıoğlu also refused to take back her past comments about Islam and the 1915 events. In her own way, she does have a coherent position and knows perfectly well what she is saying.

So, what really lies “beyond ignorance,” to borrow Ince’s turn-of-phrase?

First and foremost, Turkey’s main opposition party has a very real knot in its stomach. Although the movement keeps repressing the urge to confront its problems, the fear that a confrontation will serve the ruling party’s interests makes these simply impossible to conceal.

The CHP, whose founder was Atatürk himself, is in the midst of debating its future ideological orientation behind the smokescreen of this most recent controversy.

In the 1970s, the late Bülent Ecevit transformed the party – at the time, a remnant of the single-party regime – by embracing a “left-of-center” approach. This time around, it seems, CHP Chairman Kemal Kılıçdaroğlu and Kaftancıoğlu have pushed the CHP to the brink of a similar transformation.

In a sense, the former’s pragmatism, embodied by his endorsement of center-right candidates and efforts to unite opposition parties, and the latter’s rigid ideological stance, which appeals to the Peoples’ Democratic Party (HDP), complement one another. Both figures are thus preparing the main opposition party for a grand coalition. Hence Kılıçdaroğlu’s unwavering support for his party’s Istanbul chair despite strong reactions from within the CHP.

Kaftancıoğlu effectively represents the second leg of the main opposition party’s transformation since former Chairman Deniz Baykal’s resignation in 2010. The first step toward change was the installment of Kılıçdaroğlu, the current main opposition leader, as CHP chairman. Nowadays, the goal is to realign the movement, such that it can publicly enter into a partnership with the HDP. The party leadership aims to reconcile the HDP’s Kurdish nationalist base with the CHP’s neo-nationalist Kemalist voters. Representatives of the Turkish left within both parties have served to bridge that gap.

That’s why a distinction must be made between Mustafa Kemal, who fought the War of Independence against imperialist powers, and Atatürk, who, in the single-party period, crushed Kurdish nationalist uprisings.

Time flies indeed. The CHP leadership once portrayed the incumbent Justice and Development Party (AK Party) government, with its conservative, religious roots, as a challenger to Atatürk.

Ahead of the 2007 presidential election, the main opposition party frequently weaponized images of Atatürk on the campaign trail. Again, during the Gezi Park revolts in 2013, the mob deliberately waved Turkish flags emblazoned with pictures of Atatürk to identify themselves as “Atatürk’s soldiers.”

Fans attending Fenerbahçe-Galatasaray derbies chanted: “We are Mustafa Kemal’s soldiers. Everywhere is Taksim, everywhere resistance!” In other words, Atatürk, one of the Turkish people’s shared values, was intended to serve as a symbol of “resistance” against an elected government. At the time, Atatürk’s Mausoleum in Ankara, Anıtkabir, was considered a near-spiritual place where disgruntled opponents could voice their complaints. Needless to say, the implication was that “Atatürk’s republic” was in danger.

It is somewhat ironic, therefore, that the same party is now experiencing a major crisis over the distinction between “Mustafa Kemal” and “Atatürk.” There is now talk about “real Kemalists” being kicked out of the movement on this very distinction. The true meaning of Kemalism is a contested area between various intra-party cliques. This time, it seems, Atatürk’s party is in danger. But my sense is that the real crisis will break out when the CHP leadership publishes its upcoming report on the Kurdish question.

Will the Kılıçdaroğlu-Kaftancıoğlu partnership spark a Turkish nationalist reaction within the main opposition party? Will the ongoing competition within the CHP organization result in rumors of Alevis, Kurds, Turks or Sunnis leaving? Or will “pro-Atatürk” figures let themselves be purged by “pro-Mustafa Kemal” figures from the CHP, as the party completes its latest ideological transformation, just because they think it won’t benefit President Recep Tayyip Erdoğan?

Turkey and the US presidential election
Next
Loading...
Loading...
We use cookies to ensure that we give you the best experience on our website. If you continue to use this site we will assume that you are happy with it.Ok