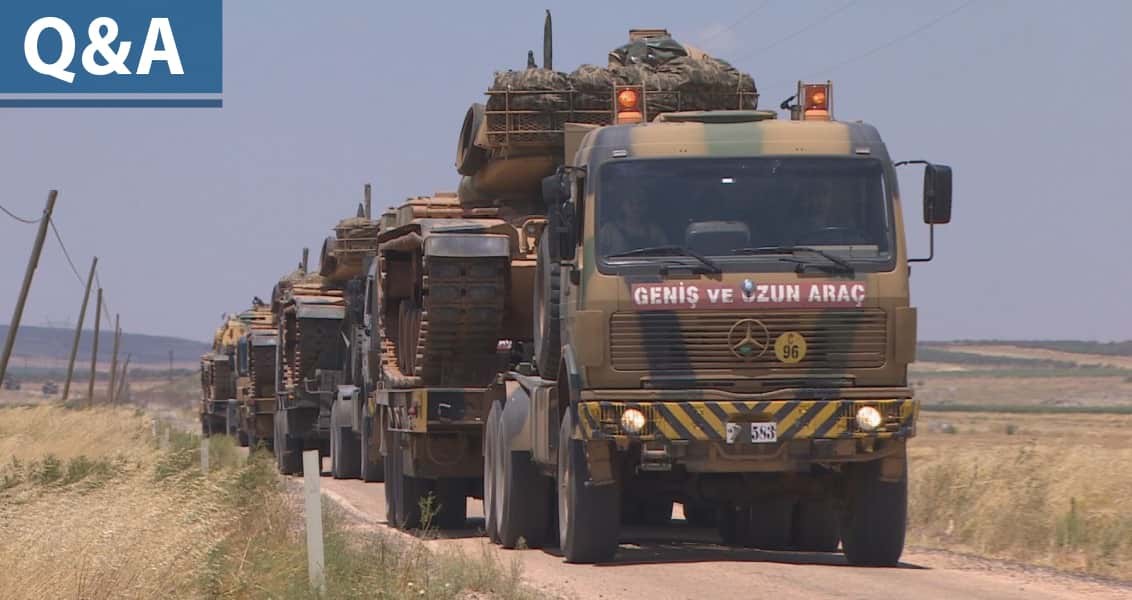 Turkey has initiated the Idlib Operation in order to eliminate the possibility of the emergence of another human tragedy, and to avoid the loss of many lives.

At the 6th Astana Conference, Turkey and Russia reached an agreement to implement de-escalation zones in the Idlib Province of Syria. Turkey is to enter Idlib as the guarantor of the Opposition Groups and execute the plan under the status of an observer. The Idlib Operation is undertaken under such an agreement. Meanwhile, the people of Idlib are extremely concerned about the probability that Idlib may be turned into a second Aleppo. In Aleppo, the opposition groups fought against the regime, and Russian and Iranian forces during which period the city was devastated and many opposition fighters had to leave the city with their families. It is acknowledged that the people of Idlib would welcome the Turkish operation in order not to encounter another scenario like that which occurred in Aleppo. Turkey has initiated the Idlib Operation in order to prevent such a scenario, to eliminate the possibility of the emergence of another human tragedy, and to avoid the loss of many lives. Another goal is the eradication of any opportunities brought about by the probable high human mobility and power vacuum in the area which terror groups, such as the Kurdistan Workers’ Party (PKK), could use to their advantage.

Idlib is a province that has sided with the revolutionary forces from the start of the Syrian uprising. Idlib was cleansed of the regime forces in a relatively short span. A wide scale Idlib offensive was undertaken by a consortium of several groups such as the Free Syrian Army (FSA), Ahrar al-Sham, and al-Nusra Front; in the aftermath, a cosmopolitan civilian-military structure was established. Particularly after the fall of Aleppo, many refugees have flocked to the city and the population has reached over one million. Hay’at Tahrir al-Sham (HTS), which is dominated by the al-Nusra Front, has taken control of many locations in the province and after many confrontations, specifically with the Ahrar, it has increased its grip in the region. As of the moment, the HTS has control of the majority of the region’s main cities. However, a number of other locations are controlled by other groups who have not joined the HTS and/or even fought against it such as Ahrar al-Sham, Faylaq al-Sham, Jays al-Izza and Jays al-Idlib, and Nour al-Din al-Zenki – who have broken off from the HTS.

It is to be noted that both due to their relations with Turkey and the demands of the people of Idlib, the groups outside of the HTS are welcoming and are participating in the operation. On the other hand, divisions within the HTS have also occurred. During the last few months, the HTS declared its opposition to the intervention by Turkey and it is expected that other splits will take place within the HTS. Nevertheless, it is probable that confrontation with al-Nusra, which forms the core of the HTS (after recent splits, the HTS is mostly al-Nusra), will take place. The Nusra Front is one of the most capable fighting groups within the opposition; it harbors many militants with high fighting experience yet lacking sophistication in arms unlike DAESH. They have acquired many weapons in the black market and from other opposition groups. They are effective in the use of suicide bombers and vehicle-bombs. They have informants who have penetrated other opposition groups, while they also count among them many militants –  including in the group’s high ranks –  who are in the service of foreign intelligence agencies.

Idlib is a province surrounded by the Assad regime in the south, the PKK establishment in Afrin in the north, and Turkey in the west. The loss of Idlib, as the center and life-blood of the opposition in the north will have significant negative consequences in the resolution of the Syrian crisis, in general, which in turn will weaken the hand of the opposition at the negotiation table. For Turkey, an offensive on Idlib by the regime, Russian and Iranian forces will be the beginning of another humanitarian tragedy which will force thousands to relocate and initiate another wave of refugees towards Turkey. This will have negative security, social, and economic consequences for Turkey. Together with this, the chaos and the power vacuum that will emerge in Idlib will present an opportunity for the PKK in Afrin in the north to expand into the region and gain control. The Idlib Operation by Turkey, thus, will generate greater pressure on Afrin, and provide a strategic advantage in probable further actions by Turkey. Idlib is also an important region in order to establish a de-facto safe-zone in the north in conjunction with the Euphrates Shield region. The operation aims to transform Idlib into another safe-harbor province in the same spirit of reconstruction as that of the Euphrates Shield region in order to motivate Syrians to return home.

Idlib Operation is being conducted together with the FSA factions similarly to Operation Euphrates Shield (OES). The vanguard FSA regiments have entered Idlib and subsequent to the clearing of the territory of adverse elements, it is expected that the Turkish Military will head into the city. Turkey has been spending considerable effort to minimize the probability of any confrontation in the region. One aspect of this effort has been to break up the HTS, which opposes the operation. During the last few weeks, a number of break-offs from the HTS have been actualized. Another aspect is to prevent any resistance by convincing the HTS that the welfare of Idlib and its people rests in non-aggression and de-escalation. The major question at this time is whether any resistance and confrontation will occur. It is probable that both because of Turkey’s strategic importance for the opposition and the pressure by the people, any resistance will be weak. On the other hand, the unwillingness of the HTS’s core group to relinquish its position, and thus to put up resistance must be considered as well. An armed confrontation with the HTS which could recently attack Ahrar, a group with whom they have fought side by side for many years, is still a likely scenario. In summary, Turkey plans to run the operation with the local factions expecting no to little armed confrontation, but is also taking measures against possible security risks and resistance. In the case of a resistance from the HTS, the marginalization of the group, and the countering and elimination of any resistance will occupy the agenda. Once the control in Idlib is established, the Turkish Military will remain in the province to observe and ensure non-aggression and de-escalation.

For a while, Turkey has expressed the opinion that the operation has to be conducted after taking necessary measures and preparing the grounds for non-confrontation in spite of Russia’s efforts to the contrary. To that end, Turkey engaged in talks, foremost for the reorganization of the groups in Idlib and breaking any possible resistance. The purpose of the talks was to prevent confrontation and protect the people of Idlib. It is still not clear whether the HTS will engage in confrontation with Turkey and to what degree. This is one of the operation’s greatest risks. In order to incite such a confrontation, the radical elements within the HTS, and the regime and the PKK elements, all may create provocations. Both the regime and the PKK, so far, have reaped the greatest benefits from intra-opposition confrontations; thus, it is vital to guard against such undertakings. On the other hand, the FSA elements who will stay in Idlib must be chosen carefully for it is vitally important to ascertain the compositions of armed groups in Syria where regionalism and group competitions run in high gear. Finally, it must be considered that on Syria, there are still significant differences between Turkey’s vision and those of Russia and Iran, and bearing this in mind, Russia’s and Iran’s capitalization of the opportunities yielded by the Idlib Operation and their targeting of civilian populations to create dissent and divisions inside the opposition-held areas must be prevented.

Cooperation with Russia and Iran: is Turkey Joining the Eurasian Axis?
Previous

Will Turkey's Cooperation with Iran Last?
Next
Loading...
Loading...
We use cookies to ensure that we give you the best experience on our website. If you continue to use this site we will assume that you are happy with it.Ok